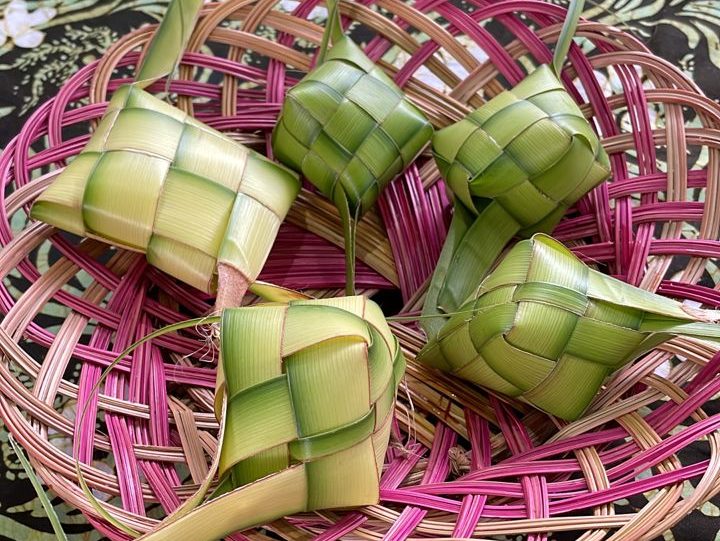 How much do you know about ketupat-weaving?

Ketupat is something that most of us only know as a favourite dish we consume during the festive season. We sometimes have it with our mother’s spicy, home-cooked rendang, thick lontong gravy, and it is even served with the Malaysian favourite, satay. Behind the compact rice square, however, is a long and rich history.

During the recent RIUH Raya Souk held at Sentul Depot in Kuala Lumpur, there was one booth that stood out among the others. Here BASKL met a special individual who is genuinely passionate about the art of ketupat weaving and the rich history behind it. Dr Jarina Mohd Jani, 47, a lecturer at Universiti Malaysia Terengganu, was all up for sharing her insight on what makes this unique hundreds-of-years-old cuisine so special. Dr Jarina was brought to RIUH by the AirAsia Foundation whose mission it is to support social enterprises and develop community tourism potential within the Asean region.

Dr Jarina explained: “Leaf weaving is not something unique only to Malaysia. Rice parcels have been a tradition within the Asia Pacific region and the Austronesian culture for a very long time and their origins can be traced back to the 15th century. The Malays here in Malaysia are a very mixed society and heavily influenced by whatever is present in the Nusantara, the Malay Archipelago.”

The Asia Pacific region is a wide area that stretches from Taiwan to Madagascar, and rice parcels can be found in almost all of the countries here. Not many of us may know this fact but Dr Jarina added that, “today if you go to Taiwan, the indigenous people of Taiwan also weave something like a ketupat, however their rice parcel has a different name and is associated with other festivities.”

Did you know that the practice and tradition of weaving leaves into rice parcels is older than the celebration of Hari Raya itself. The ketupat that we currently have today and associate with Hari Raya is a tradition that comes from Java during emergence of Islam there. Dr Jarina said: “It was introduced by a religious community called the ‘9 Muslim Saints’ or Wali Songo as they were called in the Muslim community. They were considered Muslim warriors who would spread Islam in this region.”

Dr Jarina continued: “Using the existing rice parcel tradition, one of the leaders of a group named Sunan Kalijaga wanted to mark something special for Hari Raya or Lebaran as they call it in Indonesia. The ketupat was created as a gift for people during the festivity to symbolise purity. “The rice is white and you offer it to people. It was a culture that he wanted to introduce as part of what Islam is all about. It’s about giving and about forgiving.”

Apart from the rich history behind the emergence of the ketupat, Dr Jarina also shared about the ketupat’s aesthetic value – from its design, to the process of weaving and even the message that is delivered through the simple rice parcel. Long ago, people would use whatever they had in their surroundings to make the ketupat. They would also weave various shapes and animalistic figures back then. You can still see some of these type of weaves within the indigenous communities even today.

Dr Jarina said that the most common design in Malaysia is the “ketupat bawang”. Another famous ketupat that is widely available in Malaysia is the “ketupat palas” which is glutinous rice wrapped in young Licuala leaves or daun palas. “Ketupat palas is very famous in the north-west region of the Malay peninsula. Unlike the east coast which assimilates a lot more from the Muslims in Java, the Muslims in the northern parts of our country absorb their practices from Thai and Chinese culture.”

Dr Jarina also explained that in the past, people in the villages used to sit around together before festivities and an elder would teach the younger gen these weaving skills. This was how people back in the day passed down skills to the young.

The bond in a family was built upon activities such as this, especially when preparing for a festive occasion such as Hari Raya. Sadly, this heritage within the Asean region, which is a melting pot of cultures, is rapidly dying and the number of people who can weave and people who value such traditions has diminished over the decades.

Dr Jarina has set on a “ketupat campaign” as she sees strong social values and skills embedded in the artistic process of ketupat weaving. “I am working hard to revive this culture,” she said, adding that she wants to encourage people to come back to consuming traditional ketupat which not only is it healthier, but has a lovely fragrance to it and tastes a lot better when compared to the ones made with plastic wrapping. Dr Jarina said, “if every family shifts from plastic ketupat, back to the traditional ketupat, can you imagine the positive effect it would have on the environment?”

In her campaign, Dr Jarina gets families to pledge and commit to this cause. She also says that if you don’t know how to make ketupat, “there are people who sell empty rice parcels and in KL you can get them for only about 50 cents each, so buy!”

Dr Jarina is currently working together with AirAsia Foundation to foster culture, heritage and environmental conservation. Yap Mun Ching, Executive Director of AirAsia Foundation, says that their earlier plans had been put on pause by the pandemic but they are now back in business. “We will be working together with Dr Jarina to develop community tourism activities in the Setiu Wetlands of Terengganu where Dr Jarina does her research on the interaction between people and their natural surroundings via livelihoods and traditions.”