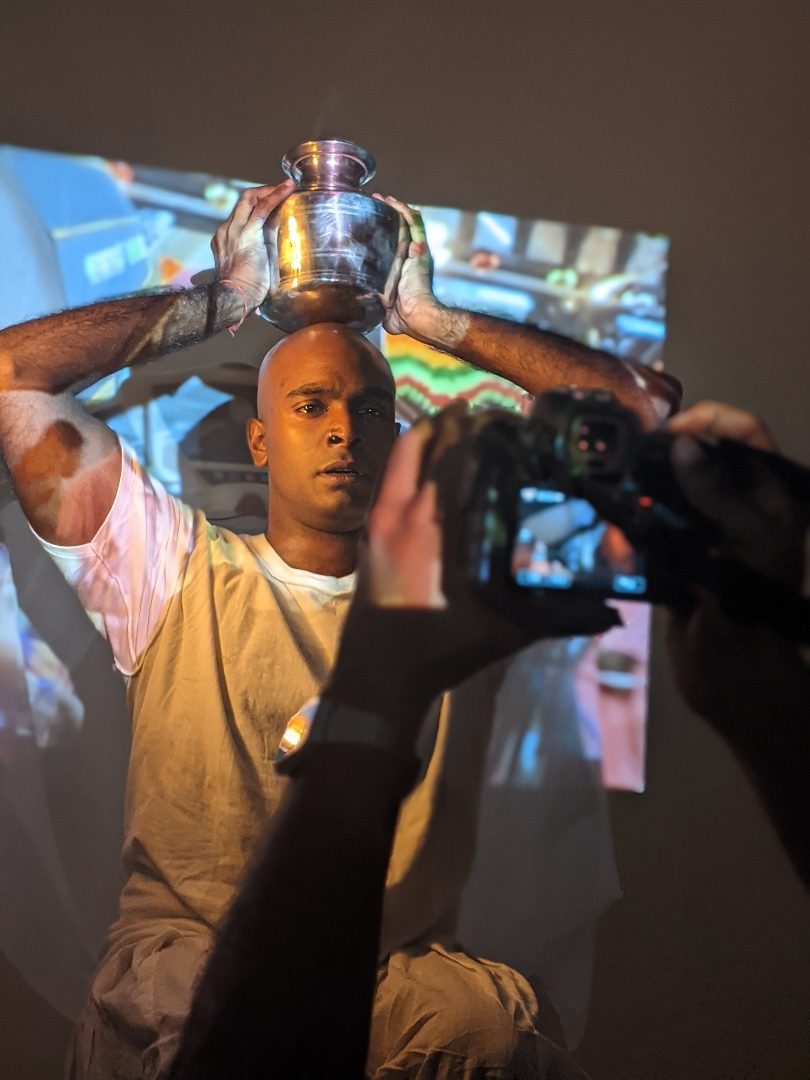 Skin manages to create a conversation about race, class, and gender, making us reflect on what our own skin means.

SKIN makes you incredibly aware of your own shell. Despite the self-labelled “poetic documentary” having no dialogue, the piece has managed to create a conversation about race, class, and gender, making us reflect on what our own skin means.

Showcased online in June 2021, SKIN is centred around the performers and producers Luvenia Kalia and Theyvapaalan Jayaratnam (Paalan), who are filmed performing a flow of movements in various parts of Malaysia. The performers are wrapped in a mix of modern and traditional clothing that complements the stunning shots of their surroundings. Through the act, we observe Luvenia and Paalan’s relationship with their skin.

SKIN influences the audience to draw attention to their own skins in its opening scenes. The performers are filmed feeling their own shells, hands brushing the hair on their chests and grabbing the meatier parts of their backs, making us feel as if our skin is being touched. The close-up shots of hairs bring sensations to the ones on our own bodies. When the performers tie their bodies with pearls, the clarity of the shot makes us feel the coldness of the beads.

Once we are aware of our shells, we are pushed to see our skin as a separate entity from our body. The film achieves this by shooting the performers bodies in fragmented shots in the beginning of the piece. These ideas are made concrete with the quote about butterflies, where the documentary states the performers are a “large amoeba of butterfly soup” that is “drowning in a shell”.

The concept of gender is explored in the piece through juxtaposing shots. A hairy chest complimented with a tight pearl necklace. A crop top on a male body. The male gaze is brought up in the quote “7 male bodies digest it, I watch their eyes soak it up like a parched sponge. I watched him consume it and regurgitate her shell”, making us think of how sexualised the female skin is.

SKIN encourages the audience to reflect on how their skin carries history and culture. We can see this through the shots taken at the temple, and performers making poses that resemble holy statues. We see both performers bathe in holy water and carry an offering vessel on their shoulders as they step on a treadmill, creating a modern allusion of rituals at Thaipusam. Understanding how religion and culture are embedded into the skins of the performers help us understand how we may judge someone based on their exterior.

Luvenia, who has a Punjabi and Chinese parentage, and Paalan who is of Sri Lankan Tamil descent, explore their heritage by performing movements in a rubber plantation, a place where Indians were once brought into Malaysia by British colonizers. We witness the performers connecting to their surroundings with their bare feet, falling to their knees in what seems like paying respects to their ancestry. Towards the end of this scene, there is an iconic shot of Paalan slumped against a rubber tree, forcing us to realise how our country’s history has shaped us.

These themes explored help us understand ourselves and others better. SKIN has created a space to help us step away from our judgments.

A highlight of the piece is the beautifully captured cinematography by Thinakkaaran Thamilchelvam, assisted by Khek Soon Law and edited and coloured by Quin Ooi. The crispy clear scenes were a visual feast.

Thinakkaaran captured subtle emotions of the performers so the audience would have a better understanding of them. We see an almost unrecognisable teardrop on the cheeks of Luvenia, that is wiped away with defiance. We see the hurt in Paalan’s eyes as he explores the rubber plantation. It is a pleasure to travel through parts of Penang and Kedah through the wonderfully captured backdrops the team has composed.

The piece would not be what it is without its soundtrack. The music gave allusions to religious chants, giving deeper meaning to the repetitive choreography. Shots and emotions from performers become more intense through the sounds, which help transport the audience to a space where they have a closer inspection of their skins.

SKIN can be a confusing piece for those not familiar with experimental performance. However, for those who find excitement in understanding the deeper meaning in an art piece, this poetic documentary is for you. Every visual, sound and quote is a reference to the conversation about skin the team is creating. You can spend hours trying to piece together the clues the performers are leaving on the relationship they have with their own shells. For those wanting to view the piece, you still have a chance to catch it. Purchase your tickets here. For those who are unable to afford tickets, you can write to the team as they strive to make art accessible. Screening has been extended until July 4.