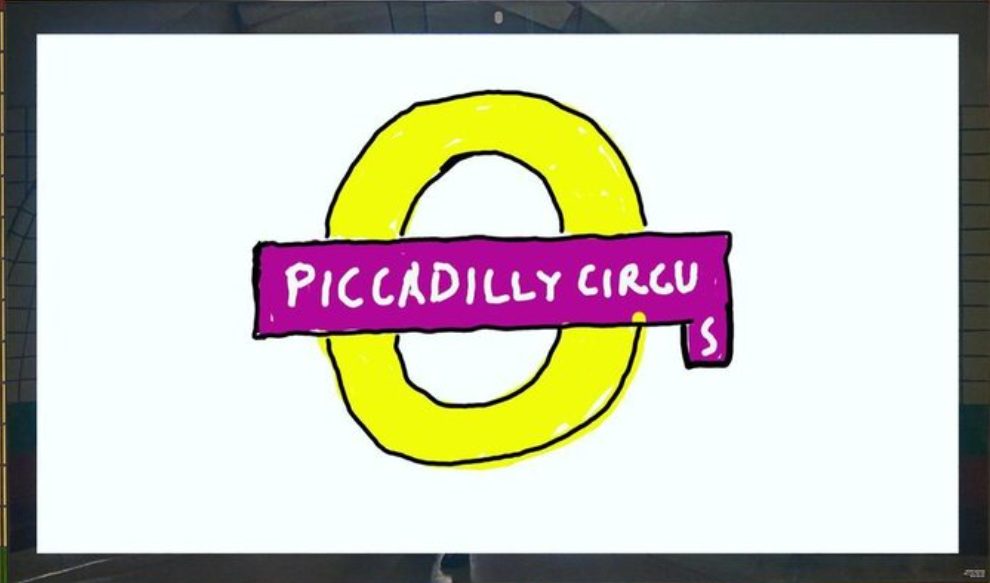 How do you entice people to take a greater interest in art? Perhaps we can take a cue from David Hockney, who has turned London’s Piccadilly Circus station into the talk of the town (and beyond!)

It’s been all over the Internet for the last few weeks. Influential 83-year-old British artist David Hockney has caused quite the ruckus with his latest work, the Piccadilly Circus signage in London.

As part of the “Let’s Do London” tourism campaign to reboot the troubled tourism industry in the great city, Hockney was enlisted to jazz up the iconic tube station logo, and came up with this pink and yellow scribble, with the runaway letter ‘S’.

Mayor of London Sadiq Khan called it “brilliant” while others have been less than impressed! “Take away his iPad please!” shrieked some and a slew of others have created their own versions on social media, mocking Hockney’s simplistic work.

British political and cultural magazine The New Statesman’s Elise Bell said that “over on the cesspit of arts criticism that is Twitter, anonymous accounts that decry all art made post-1920 as an abomination have ridiculed Hockney’s scrawl as indicative of the death of art. Other critics have rightly argued that the work feels like a red flag to a bull: fuelling culture-war debates about the legitimacy of public art, rather than encouraging the public to get onside.”

Bell continued saying, however, that the “silly little drawing feels like a breath of fresh air in the stale fug of the underground. Walking through London’s Square Mile and further afield, public art so often plays to the safe, sterile tastes of private developers keen to bring artistic flair to artificially created ‘public realms’ void of people or life” and asserted that successful public art belongs to artists brave enough to forcefully drag people out of the everyday. (Read her article here).

We decided to ask a few local artists what they think, and here’s what they said:

“It’s simple but it provokes! I think the idea is really smart, and will go a long way in boosting the mayor’s new tourism campaign. The idea of this public art was not trying to decorate or give a new image to London, but to provoke and invite participation from the public. Honestly, I can’t really differentiate between Hockney’s art and those paintings posted on Twitter making fun of the whole idea!”

Hockney himself doesn’t need to “prove himself” Lee says. “But the artwork really hits two birds with one stone: it has defamiliarised what is now a common symbol in the UK (the underground has more than a 150-year history in London) and at the same time allowed the public to approach one of the great British masters.

“I think public art plays many different roles in a community, it can be decorative, provocative, entertaining; the key point is how it can impact the community and how it transforms or utilises the public space.”

Lee said that feedback from the public must also be considered part of the artwork.

“Involvement doesn’t just mean standing in front of a work of art and taking a photo, but also raising a discussion or awareness about space, about the artworks or any social issue. It might define what the public is, and what the public’s right to the artwork is. Hockney’s work is a good example of this, or we also can refer to Richard Serra’s controversial public art in Manhattan, from 1981-1989.”

“The word ‘public’ in public art shouldn’t only refer to a common physical space, but a platform for everyone to respond and voice out their thoughts. Sometimes, it’s not how public art shapes the community, but how the community shapes public art. Both parts are so important.”

Visual artist/printmaker Mark Tan concurs with Lee. “I feel that this was a fresh concept to change up how the traditional sign looks. People from creative backgrounds like to push the boundaries and change how society views things. Hockney’s intent was very possibly to shake things up in London and see how people would respond. And respond they have!”

Why has the London public lashed out? Tan said: “If you look at things from a psychological perspective, everyone feels a little disgruntled right now, and are likely to find negativity in everything. Plus, projects like this receiving such scrutiny is really quite normal.”

Tan also brings up the pertinent point that throughout the course of history what constitutes art has been controversial. “If you look back to the 1960s when the graffiti movement first started in the United States and people were using aerosol spray cans to make art, it was considered vandalism, but today graffiti is considered street art and accepted in the mainstream.”

Shamin Sahrum (or Sam, one half of the multidisciplinary design studio @notoscale) gives a thumbs up too.

“It’s interesting that Hockney decided to use such basic and childlike graphics … to me, that says a lot about him as a master painter that he decided to ‘reduce’ his artform or make it more accessible to the public,” Sam said.

Sam, who is interested in readymades, memes and pop-culture, and uses a variety of mediums such as digital collage, built installations and writings, added that even more interesting is how the public has reacted to it.

“You might think it’s a form of ridicule, but in fact it’s quite a good conversation to have between the public, the governing body (London city) and the artist. You can say Hockney democratised art a little by toning it down to a childlike form and it’s interesting to see how the public reacted producing similar drawings, whether they be cute to the quite vulgar!”

Public art, according to Sam, is really important to a city but it has to be structured, planned, consistent, and must be done for a long term in order to see any real impact. “It also shouldn’t just be restricted to a city council’s efforts but also other grassroots movements who are allowed to initiate their own arts movements freely. Public art, and the arts, are so much more than merely being decorative.”

So, reader, what do you think about David Hockney’s Piccadilly Circus artwork? Whimsical wonder or waste of space?