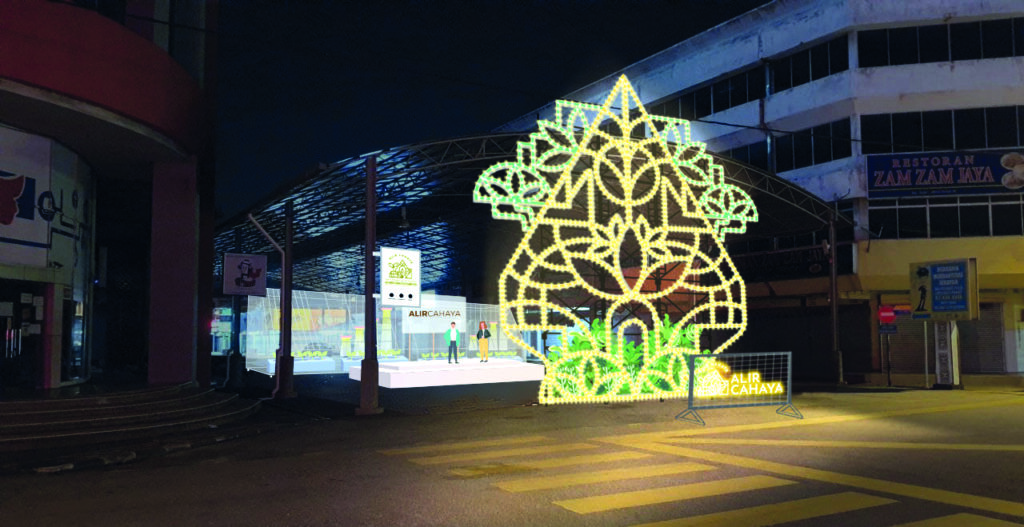 Artists Aisyah Baharuddin and Jaie Ramlee look back on their collaboration for the 'Alir Cahaya' multidisciplinary public art installation in Batu Pahat, Johor.

At a roofed area on Jalan Abu Bakar, Batu Pahat in Johor, a light-themed art installation, Alir Cahaya, has been on display for over four months, from Nov 26, 2021, to March 30, 2022. Recently dismantled, it was a herculean effort as far as local art installations went, with four artists collaborating to make the piece, not to mention the contractors and electricians who helped make sure it was installed properly. Throughout its run, it was host to many art workshops and performances. Alir Cahaya was part of The Light Project, an extension of CENDANA’s yearly event Art In The City, in collaboration with Think City to illuminate Malaysian towns with public art and performances designed to inspire the arts communities, stimulate conversations and create job opportunities.

BASKL spoke to artists Aisyah Baharuddin and Jaie Ramlee to hear their thoughts on what it was like to work on this meaningful art installation. Aisyah is a multidisciplinary artist who has created mixed media paintings, living art installations, performance art and street art. Jaie, on the other hand, has a background in graphic design and illustration. Putting their unique skills together, they collaborated with Hariz Ahmad, a painter, and Farhan Halim, a sculpture artist, to produce Alir Cahaya.

Alir Cahaya was intended to tell a story of human perseverance and recovery in the grip of a pandemic. The word “Alir”, meaning “flow”, symbolises how life continues to move forward despite difficulties just like the flow of the water current in a river, or electricity in a circuit. “Cahaya”, which means light, symbolises the glow of enlightenment that illuminates our minds, giving us feelings of warmth and security in the darkness. Put the words together, and you have Alir Cahaya, a piece intended to be uplifting during tough times. “It was created during the pandemic to inspire the public,” Aisyah says.

Aisyah further elaborates on the significance of light in the piece, “Other people may only focus on the aesthetics of the art, or how pretty it looks. But we also should consider the spiritual meaning of light. People around the world were looking for light during the pandemic. So it can represent hope. Other than that, we believe that as human beings, everybody has their own light. We try to call out all the light, which is why we wanted to collaborate with so many people. Art installations are about unity: getting everyone and everything together.

“We tried to incorporate local cultural elements and values from within Batu Pahat itself, because Batu Pahat has a very strong art history. The big idea that inspired this was the Pintu Gerbang Pelita, which is something they’ve done in Batu Pahat during Ramadan. Glittering pelita lamps to create beautiful pointillism style images at the entrance gate to the villages, to beautify the village during Hari Raya. Pelita lamps don’t use electricity, so the idea is to use natural light. However, we couldn’t use pelita lamps for Alir Cahaya due to safety reasons, so we had to find an electrical substitute and make it so that it was not too bright, to mimic the pelita. This was intentional, humans shouldn’t try to turn the night into day. We need to learn to enjoy the dark. Using so much electricity is not good for nature as well.”

Aisyah also says that Alir Cahaya also served as an introduction of the concept of public art to people. In her opinion, public art allows the artist to express their ideas to a larger audience. “Maybe it’s a new thing for them because they’ve only seen art in galleries and museums, but this is the way art should be, it can be expressed anywhere, it’s a medium for communication, to talk about current issues. Everyone was asking about what it was, because it was the first time they had seen something like this. The Light Project is an important step in developing the Malaysian contemporary art scene, it’s a good approach to get audiences closer to art,” Aisyah says, speaking about the interest Alir Cahaya had sparked among the public.

Jaie adds to that, saying, “This was an opportunity for Batu Pahat to really have a big art event that served as a gateway for people to collaborate and pave the way for the future of art in Batu Pahat.”

Aisyah also mentions that there are many traditional arts and culture practitioners in Batu Pahat, but they previously lacked the platform that the Light Project brought. “Perhaps art was never considered important enough to develop in the city. When we did this, we wanted to create historical value for the city as well. Nothing like Alir Cahaya has been done in Batu Pahat before. We hope that the local authorities will consider developing that area that we worked on as an art platform.”

Jaie says, “During this pandemic, a lot of people are facing challenges, not just monetarily but also in terms of their mental health. We wanted not just to inspire them through art, but also through creating work opportunities and building connections between the collectives. We wanted to develop the economy, so we used local businesses,” Jaie rattles off a brief list of people from all walks of life who helped bring Alir Cahaya to life such as electricians, signage contractors, plumbers and the designers for the promotional items.

While there were challenges faced by the team when working on the huge project, it was rewarding to work together with others. Jaie says, “We wanted to show the power of teamwork, how by working together, artists from different disciplines can create something more artistic and unique. It wasn’t just the four of us, we also collaborated with other collectives from around Johor. Public art is always challenging because it’s all about collaboration with other parties, like the funders, other agencies working with us, the town planner, et cetera. It’s not just about the aesthetics of the work, it’s about how we produce something together. We worked for almost six months, we met people from many different backgrounds, with many different ideas. We’ve seen so many things, and things kept on changing. There were miscommunications, misunderstandings. The artist needs to be spontaneous and ready to face these kinds of situations.”

The artists express interest in documenting the process behind Alir Cahaya. Aisyah says, “We don’t want to just stop with Alir Cahaya. I think it’s a good idea to show the process behind it, have a discussion. Maybe have an exhibition showing the sketches, drawings, videos, photographs. I think receiving critical feedback and sharing culture among the art community is very important.

“We are also thinking of compiling it into a book so it can serve as reference for other artists and knowledge for the public,” Jaie adds. Hopefully, Alir Cahaya will go on to energize the art scene in Batu Pahat for many years to come.

You can read more about The Light Project here . If you would like to see more pictures of the many events hosted at Alir Cahaya, check out their Facebook and Instagram pages.