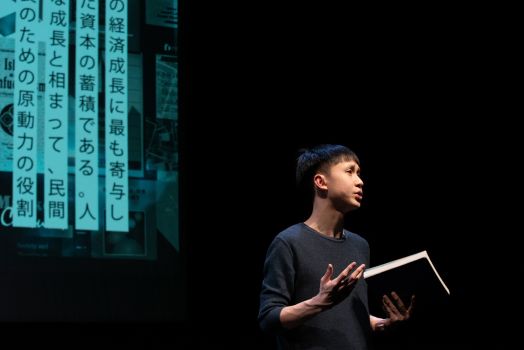 The West’s undermining of the East is not a new thing, and this attitude is reflected in “Asia the Unmiraculous”, one of the works from Ho Rui An’s latest solo exhibition, Look East Gone West. An hour-long video detailing the 1997 Asian financial crisis plays in front of an installation of books surrounding a floating hand. It is interesting to see how the tables have turned since then. In 2016 following the collapse of the Greek economy, it was a Chinese state-owned company that bought the Greek port of Piraeus. A lecture rounds up the display, during which Ho shares an anecdote about how, during a visit to Athens, a Greek taxi driver spoke highly of the Chinese.

This change in attitude really interests me as 2,500 years ago, the Greeks did not even know China existed, as seen in Herodotus’ limited map of Asia which stopped at India. The West had always viewed Asia as some place that was very backward from an economic and cultural perspective. They viewed Asians in a negative light, especially the Chinese, as they were seen as capitalist devils back when the Chinese migrated to the United States to help build the transpacific railway. Who would have thought an unknown country would eventually gain the financial power to buy the port of Piraeus?

Despite recent developments, this negative perception carries on today, and it’s interesting to see how Ho relates that to popular culture of the 20th century. He discusses the opening sequence in the movie Entrapment, which showed the characters going down engineered footage of a river surrounded by slums in Malacca, with the Petronas Twin Towers spliced in. It’s clearly meant to portray an imbalance in development, which displeased then Prime Minister Mahathir Mohamed as it showed a distorted image of Malaysia. Towards the end of the movie there was a millenium countdown scene with a 10-second delay, which can also be taken to mean that the country was lagging behind the West.

Another interesting sequence for me in this piece is a photo of International Monetary Fund director Michel Camdessus and Indonesian president Suharto at a signing ceremony signaling the end of the latter’s dictatorship. This occurred against the backdrop of the 1997 Asian financial crisis which deeply affected Thailand, South Korea and Indonesia. In the photo, Camdessus towers intimidatingly over Suharto, arms folded across his chest, exerting the aura of a master scolding his disciple for his failure. It is only later on we learn that it was never the intention, but merely the fact that at that moment, Camdessus did not know what to do with his hands.

What I got out of “Asia the Unmiraculous” is the changing the narrative on how the West views the East. Now, most of the Asian countries that were once viewed as weak and always in need of help are viewed as independent and strong nations, with some even considered superpowers standing proud alongside Western countries such as Germany and the United States. This shows that being strong financially is the key requirement to be on par with – or even overtake – the West.

Finally, there is a poster of the famous high-speed rail coin test in China and to me, the perspective has come full circle – from the Chinese making trains for the west during the construction of the First Transcontinental Railroad in the United States to developing one of the longest high-speed rails in the world, on home soil.