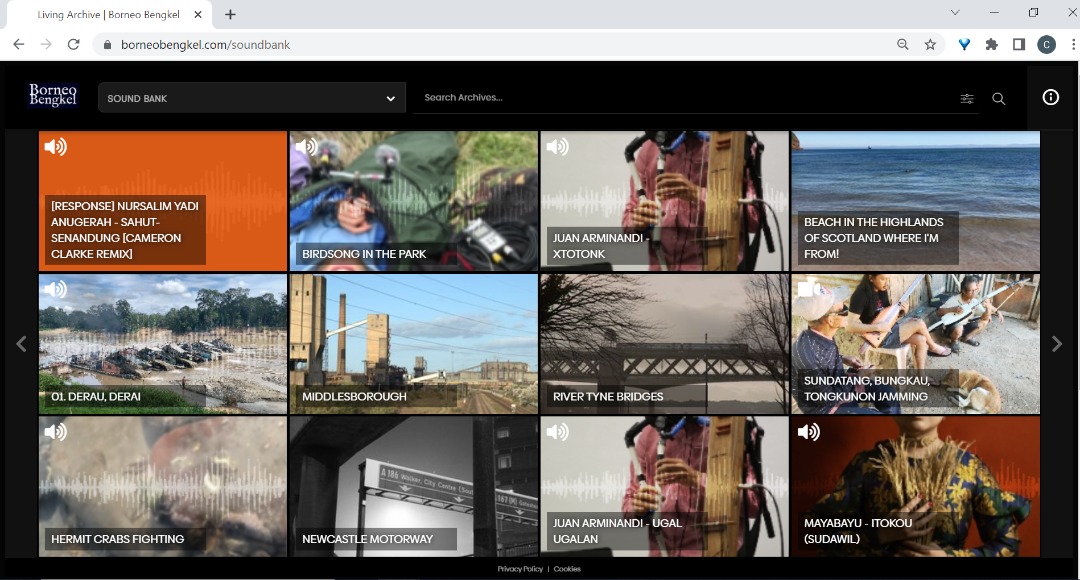 Launched on Nov 5, Soundbank is an online digital archive exhibition that presents words, songs and photographs from Malaysian, Indonesian and British collaborators.

Has a certain tune or melody ever sent you back in time? A song that you once dedicated to your ex, or one that played constantly on the radio during your travels?

Sounds have the power to shake up feelings, inspire emotions, connections and bring back memories and Sarawak-based creative platform Borneo Bengkel is celebrating this fact with the creation of Soundbank.

Soundbank is a living digital archive presented as an online exhibition. Recently launched on Nov 5, the online interactive exhibition explores the theme “Divided by Lockdowns and Borders, Can We Still Connect Digitally Across Oceans Through Sound?” and presents words, songs and photographs from Malaysian, Indonesian and British collaborators.

The archive showcases the work of 16 creatives and is housed on Borneo Bengkel’s website. The audience can skim through sounds, videos and photos and listen to snippets from the artists’ everyday lives, melodies and even endangered languages.

Soundbank collaborator Adrian Jo Milang, a celebrated Sarawakian cultural practitioner working to ensure the preservation and continuation through practice and performance of the Parap and Takna’, an oral tradition of the Kayan communities of Borneo, said: “For many, many months I haven’t been able to visit the community elders whom I usually sing with. Taking part in this project, and sharing our music and recordings on the soundbank, gave me a chance to connect with others and see that the work I do is part of a much bigger story of indigenous representation and preserving endangered languages.”

The soundbank archive, supported by the British’s Council’s Connection Through Culture grant, features recordings in over five indigenous languages, a number of them highly endangered, Kayan, Dusun and Gaelic to name a few, demonstrating the diversity of the collaborators involved in this international project.

Scrolling through the virtual gallery, visitors can experience sounds such as birds twittering in a park in Newcastle upon Tyne, a symphony of rainforest sounds featuring the songs of cicadas and insects chirping, and people jamming on traditional instruments in Ranau, Sabah. When compiled on Soundbank, these sounds that may often be taken for granted have the ability to transport the listener so clearly into another space.

Soundbank juxtaposes the old and with the new, uploading historic cultures onto a digital world where they can be revived and reach new ears. This joint effort to capture cultures which are slowly dying is commendable. Take for instance, the folk music and classic ballads that have been added to the archives.

Scottish singer Kaitlin Ross has uploaded a recording of her singing an old Gaelic ballad Uamh An Òi, while singer Maya Bayu from Sabah performs Dusun indigenous poetry written by linguistics professor Dr Rosliah Kiting. It can be quite an experience to click through Soundbank and hear musicians from completely different parts of the world sharing songs sung in old languages and on traditional instruments.

In some cases, creatives even heard each other’s recordings and remixed them to create new pieces. British sound artist Nick Williams, for example, has remixed Maya Bayu’s vocal recording of traditional Dusun poetry overlapping it with field recordings and repetitive beats.

“Maya Bayu’s Sabahan Talaala is beautiful and really resonated with me. This response is not a finished work, rather, it is a sonic thinking-through of the original. It is also an attempt to weave in some of my sound-design techniques into composition,” said the British sound artist and developer of Living Archive, the digital app that the Soundbank interactive exhibition is presented on.

Borneo Bengkel was founded in 2017, and is run by a small team based in Kuching, Sarawak. Based on an island divided into three nations, members of Borneo Bengkel have often felt disconnected from their fellow Borneans, which is why the platform has striven to host creative residencies, workshops, exhibitions and talks with collaborators from Sarawak, Sabah, Kalimantan, Brunei as well as West Malaysia, and internationally.

“The platform was developed during the pandemic, as a way to present and share work when no live performances could happen. It’s really exciting to see how this project is uniting people from thousands of miles away, who have never met, and providing a platform for them to share and learn about one another’s lives and creative experiences,” added Williams.

Borneo Bengkel aims to create spaces which explore indigenous cultures, and honour their land and ancestors. The platform acknowledges that indigenous identities are not fixed or consigned to tourism videos and museums, but are evolving concepts that can adapt, respond to and push back against contemporary times and conversations.

“Sharing our culture and traditions, and being proud of our ancestors’ wisdom is really important for us Sabahans,” said Gindung McFeddy. “For culture to live and survive we must learn about our past and respect it, but also try to experiment with modern styles and technology so that it means something for young people today.”

McFeddy is a member of arts collective Pangrok Sulap and musician from Ranau, Sabah works with elders to research and document the sundatang, a wooden lute that is highly endangered and traditionally played by Dusun, Kadazan and Rungus communities.

As a Soundbank collaborator, he uploaded several recordings which include a series of traditional instruments such as the sompoton, tongkunon, and belikan. His recordings are from the initiative “Borneo Boat Lute Revival”, which he collaborated on with Maddocks.

“Looking through Soundbank and seeing what other musicians have been doing in different parts of the world has been really interesting. I’d never heard Gaelic songs before, or traditional Irish bodhran drums which are like the Malay kompang. I liked hearing Maya Bayu’s songs, too, which are spoken in Dusun, my own indigenous community, because it is rare to hear Dusun songs these days.”