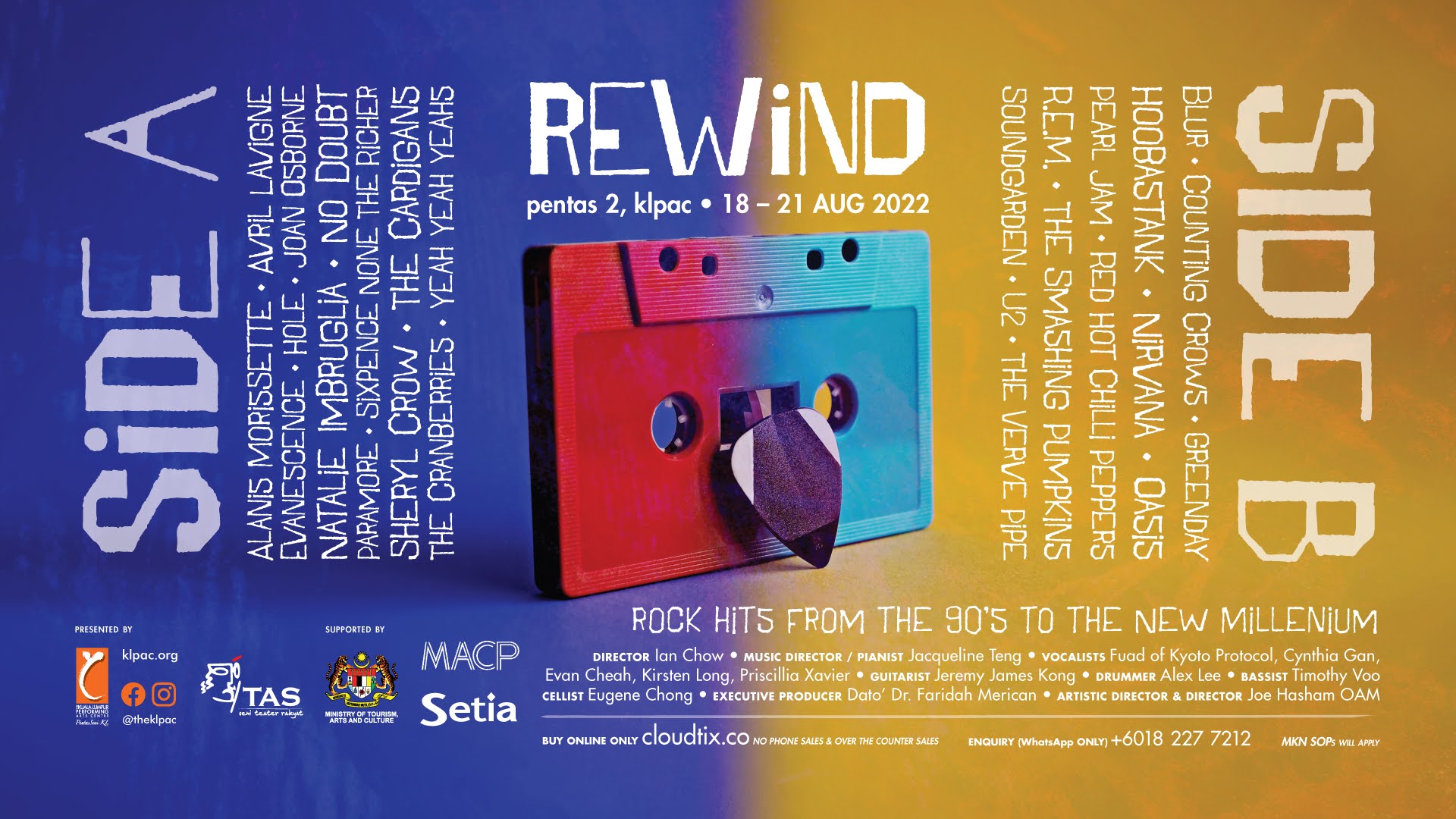 Rock on with this blast from the past.

Director Chow calls the hot-selling show a soundtrack to his teenage years – as you can imagine, it’s angst, turbulence and great memories all rolled in one! To make the rock concert more interesting, Rewind is designed to feel like two sides to a mixtape, with Side A featuring songs from female rockers (like Alanis Morisette, Avril Lavigne, Sheryl Crow, The Cardigans and Yeah Yeah Yeahs) and Side B presenting guy bands (like Blur, Green Day, Hoobastank, Nirvana, Oasis and Red Hot Chilli Peppers). On top of that, Pentas 2 will be transformed into arena staging to amp up the experience. This way, the audiences sits in a circle, with the performers in the middle.

Curious about the details of the show? We speak to Chow and Fuad to gain snippets on the making of Rewind.

Chow: Before the lockdown in 2020, I had this idea to direct a music concert featuring songs from the 1980s (the working title was Mambo Jambo) but my interest was tapered down by the third lockdown. A lot of the performers were very eager to go back on stage with two highly-requested productions: the next instalment of Let’s Rock (a rock concert but done with a combo of klpac symphonic band, choir, 4-piece rock band and 3 soloists) and Yesterday Once More (an English golden oldies production featuring song from the 1930s up to the 70s). There came a point where I needed something a little higher energy to recharge myself, so Yesterday Once More wasn’t in my priority list. I wasn’t in the mood to do sentimental love songs nor to revisit Mambo Jambo, but I felt as though Let’s Rock had the energy that I was seeking. From planning it with a huge number of performers and production team, I scaled down on the concept, thought of another staging method and refined the song choices to what is now Rewind. I couldn’t ask for more as rock is my most favourite genre!

Is now the best time for a concert like this?

Chow: I don’t think there is really a good time or a bad time for something like it, where the audience and performers could feed off each other’s energy, have a good time, reminisce about the good old days or just simply to feel alive. Music speaks to us differently and in ways that we may not be able to imagine. Just lose yourself in the 75 minutes – be free of your worries for a while.

Fuad: We can finally go out again! Live shows are happening again! Need I say more?

Chow: The A-and-B-Side concept stems from me being greedy and wanting to feature as many songs as possible – my initial list was about 70 songs. In a single show, the maximum I can go is approximately 16 songs before the audience has enough of us. Songs that didn’t make it onto the current Rewind list include those from The White Stripes, The Offspring, Blink 182, Foo Fighters and Bon Jovi. By having two separate shows, I would be able to feature more songs. There are so many great bands that weren’t featured here but will be featured in Let’s Rock 3 (which is coming in March 2023)!

Fuad: From my experience with Kyoto Protocol, I’ve learned that each musician has his or her own inherent sound. Even if you play a piece note for note, there will still be an intangible difference from one musician to the next. This way, we inject our unique DNAs into the song and elevate the pieces to a level that is not possible during a solo act. It’s hard to put into words and is best experienced cathartically in the flesh! It’s great to have a mix of ages and experience levels within this cohort. It’s my first time dealing with a group of singers this large. We’re each relearning how to sing and developing stamina to last for a near two-hour show. We hope that the audience will be able to sense our blood, sweat, tears and commitment to this performance!

Who this concert is for?

Chow: Everyone and anyone. This is certainly not a prim and proper concert that has a dress code – just rock along with us!

Fuad: I would definitely expect people of my vintage – born in 1984, ahem – to revel, but would also like to see curious cats who fall outside of the expected demographic to come too; I hope they would come to love this era of music. To me, it’s still the best era of music bar none!

And whether their teenage selves would be coming to Rewind…

Chow: I have always wanted to be performing in such a show to a huge stadium crowd! Which is why I used to shower for 30 minutes at a time then, imagining myself as a performer. I was a true bathroom singer then. The arena staging is perhaps a way of me realising this teenage fantasy.

Fuad: The answer would be a resounding yes. There was always something primal that drew me to rock music of the 1990s. I’d like to believe that no matter which parallel universe, this music will always be part of me. Younger Fuad was always struggling with identity: he didn’t like to stand out too much, but was not content to be like everyone else. He’d probably head out wearing something safe-ish, like flannel. That being said, I’m in awe of today’s youth. They have a sense of freedom when it comes to expressing themselves through fashion and it’s very empowering.

I think I would have truly enjoyed both Side A and B. It never mattered if the singer was male or female. Good music was good music. Younger Me would struggle to find the superlatives to relate the emotion, but he would be able to tell you if the music was good.

Rock on and Rewind from Aug 18 to 22! Tickets are priced at RM65 for one programme (either Side A or B) and RM100 for both programmes (both sides A and B) for any show date combination. Tickets can be purchased here. Glow sticks provided!