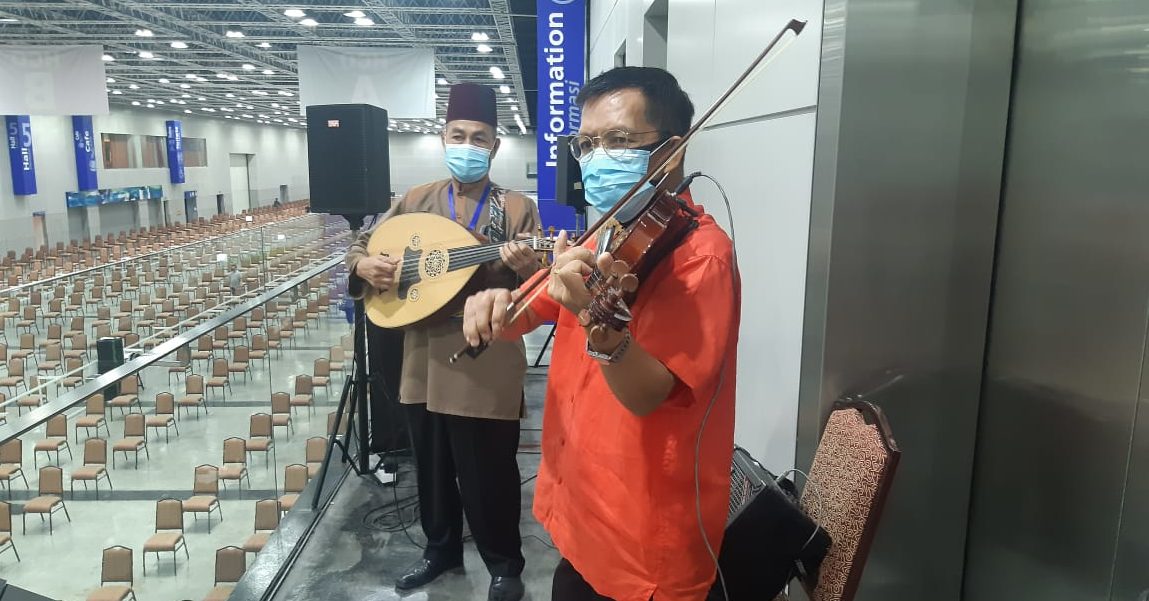 Getting your vaccine at the KLCC Vaccination Centre (PPV) anytime soon? Spend a moment or two to bask in the soothing and stunning sounds of Malaysian traditional music!

The COVID-19 pandemic has impacted a lot of people and their means of earning a living. This includes a long list of Malaysian musicians who have suffered through a performance hiatus for over a year now. But true enough, when the going gets tough, the tough get going! Earlier this year, the Vice President of Musicians for Musicians Malaysia (MFM), Edwin Nathaniel, came across a brilliant idea. Inspired by Thai artists’ performances at their vaccination centres in Bangkok, he was eager to try the same act here.

In June, the suggestion was brought up to the Science, Technology and Innovation Minister – also the coordinating minister for the National COVID-19 Immunisation Programme – Khairy Jamaluddin. With the aid of the COVID-19 Immunisation Task Force (CITF) and Ministry of Tourism Arts and Culture (MOTAC), a trial run for live vaccination centre performances was put in place not long after. Adhering to strict standard operating procedures, a list of MFM-registered musicians are selected to perform at the KLCC and Bukit Jalil vaccination centres respectively for two weeks, starting end July.

The two selected centres came alive with a spectrum of different musical genres, but what piqued our interest immediately were the occasional appearances of musicians playing live traditional music. BASKL had the pleasure of chatting with some of the performers at the KLCC vaccination centre to find out more about these sessions.

ASWARA instructor and ghazal music enthusiast Norihan Saif and his session partner, Abdullah Saharan, pair the gambus and violin to produce alluring joget, samrah and zapin tunes, one after the other. “I’ve known Abdullah for a long time. He and I were in the Armed Forces together,” says Norihan, reminiscing. “He was at one time, a violinist at the Kuala Lumpur City Hall.”

Both musicians share a soft spot for traditional Malay music and wanted to bring the joy they derive from them to others the vaccination centres. “I used to sing with the National Symphony Orchestra,” he notes, “And as much as I’d like to sing during the sets, I admit that it doesn’t go well and is truly challenging with the face mask on!”

Percussionist and dikir barat buff Mohd Shafic Aminuddin Husin – who goes by the nickname Mat Din – shares the unique experience with accordionist and pal, Abdillah Firlany Abdul Malik. Mixing things up during their sets, Mat Din says, “We alternate between different musical instruments to change things up when we can. I play the rebana and Abdillah plays the gambus during one set, then the accordion on our next one.” He notes that zapin tunes are a hit with staff, volunteers and vaccine receivers alike.

Of course, playing music at the vaccination centre is a different feeling entirely. “I’m used to – and quite miss the feeling of being in the company of a full band. Here, it’s just the two of us,” adds Mat Din.

Musical instructor and conductor, Chen Kam Chien pairs up with his wife, Khoo Siok Bee, to bring forth traditional Chinese music to the KLCC vaccination centre. They both are adept at playing a line of traditional instrument, but Chen decided to play the two-stringed erhu for this occasion while Khoo takes on the multi-stringed guzheng. “We used to play together during roadshows,” marks Chen.

Together, they want to expose more Malaysians to the beauty of traditional Chinese songs. They play their favourites at the vaccination centre – soft, romantic classical and folk songs inspired by picturesque hills and river.

“But we have Malay folk songs in our list too, like Rasa Sayang, Can Mali Can and Lenggang Kangkong,” he says. Like fellow musicians Norihan and Mat Din, Chen is joyful for the opportunity to perform. Although so, he notes, “We’re quite distanced from the audience.” Truly, he too misses intimate interactions during performances.

In spite of the challenges posed, all three duos are ecstatic to have the chance to play, and do so from their hearts. “From what I see, most Malaysians welcome all types of genres, which is amazing. Most people are open to new sounds and express admiration and appreciation,” says Norihan.

Mat Din, reminded of his first session on Aug 1, says, “It’s heartwarming to see people waving towards our ‘performance balconies’, some giving us their thumbs up. A few would even openly dance!” Khoo says during our chat, “All of us are our most careful selves while performing out in the open. But I could never deny the excitement.”

As Hari Kebangsaan grows nearer, the duos are also trying to pack in some Merdeka-inspired songs to their set lists. For those of you scheduled for vaccinations at the KLCC PPV centres, make sure you keep an ear out for these soothing sounds. Mat Din and Abdillah make their return on Aug 8. Norihan and Abdullah will be performing again on Aug 10, while Chen and Khoo will be there this Aug 14.