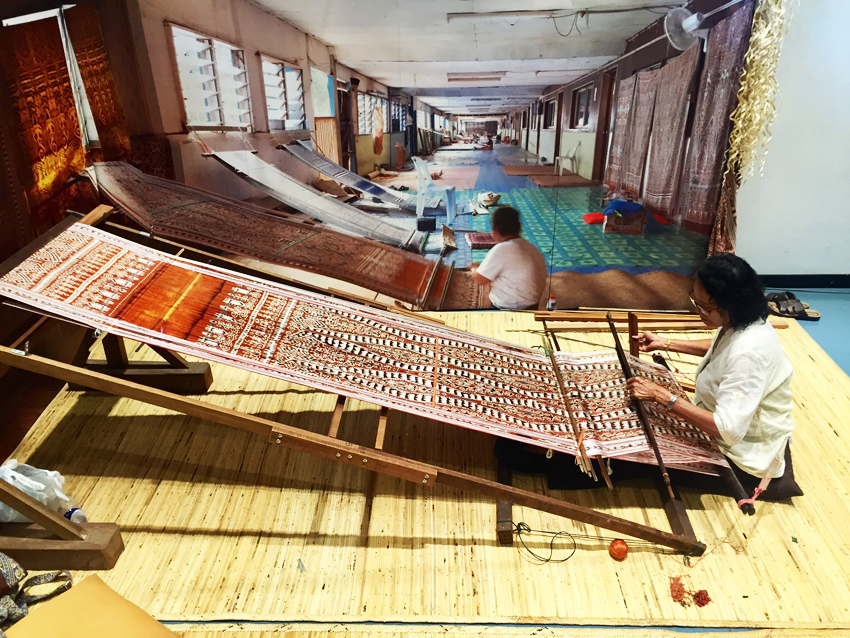 It starts with a dream and then turns into motifs and patterns that tell a story of ancient times. How Pua Kumbu came about is as enchanting as the textile itself.

By ATIKAH HANAFI for LENSA SENI

Borneo is a treasure trove of rich cultural heritage and tradition. Hailed for its ethnic diversity and tribal beliefs, Sabah and Sarawak offer many relatively unexplored arts and traditions including the exquisite hand-woven Iban textile known as Pua Kumbu.

Pua Kumbu is the Iban equivalent of a “blanket” – meaning “to cover”. It refers to a tie and natural dye resist textile hand-woven exclusively by Iban women. Aesthetically speaking, this sacred tradition carries rich allegorical symbols, legends, stories and rhymes that are quintessential to Iban beliefs and origins.

Pua Kumbu also serves as an important intangible cultural heritage to Iban culture and the ancestral knowledge of creating this traditional textile has been passed down across generations.

In the past, Pua Kumbu was mostly regarded as a ritualistic cloth, used in sacred ceremonies and in rites of passage to mark one’s birth, death or marriage, as well as a healing ritual. Nowadays, however, Pua Kumbu has entered the consumer’s market as tailored clothing and scarves. Some motifs are said to possess formidable power, and therefore only certain designs and patterns are considered safe to use.

Since there are no written records that capture the history of Iban culture – let alone the origin and development of this traditional textile – the only way to unearth Iban histories is through oral tradition in the form of engap, pantun, sabak and renong. The origin of Pua Kumbu can be traced in many myths and folklores. Among the most prominent ones is the story of Menggin and Dara Tinchin Temaga.

Menggin’s meeting with Tinchin was an accidental one when this skilful hunter went to the forest in search of game. Menggin’s hunting turned into a fruitless escapade until he encountered a hornbill. After hitting the bird with his blowpipe, he rushed towards it only to be greeted by a woman with exceptional beauty, named Tinchin, crying in pain. Their encounter led to marriage and later, the birth of a baby boy. As days passed, Menggin could not help but notice that his wife was constantly gazing at the sky while feeding their child; she was also able to intricately weave clothes of exquisite craft.

From the start, Tinchin forbade Menggin from asking about her lineage and background. Hence, her origin always remained a mystery to everyone. Soon, Menggin’s curiosity became too overwhelming, so he asked Tinchin to reveal her true identity. His wife finally revealed that she was Dara Tinchin Temaga, the daughter of the Iban God, Singalang Burong. Tinchin later decided to return to her original place, leaving her husband and son behind.

Before her departure, she left the two handwoven clothes for her husband and son to wear so that they would be able to visit her in her realm. These clothes were later known as Pua Kumbu. From that day on, the clothes were passed down for many generations and Iban women continue to weave similar clothes as a means to attain proximity with their God and the spiritual realm.

The origin is not the only thing that has traces of mystical elements. It is said that the elaborate motifs and patterns used are not personally inspired or planned by the weaver. Instead, according to belief, the inspirations for each design are whispered and depicted in dreams – an ability only those deemed as master weavers are blessed with. Once they receive the sacred dreams, it becomes the weaver’s responsibility to fashion them into material form.

Before the weaving process begins, spiritual rituals must be performed by the community and this includes a ceremonial cleansing of the longhouse, prayers and chants to ward off evil spirits, as well as self-cleansing in a river by the weaver herself. Once all these rituals have been performed, only then may the weaver begin preparing the fabric.

From the spiritual world, the weaver then steers towards nature. Natural ingredients such as sea salt, ginger water, essential oils and leaves are heated and used to treat the yarn. After the yarn has been treated and conditioned, the weaver can move on to dyeing the strands, and once again nature plays its role.

Vivid dyes are produced using natural ingredients extracted from plants such as engkudu, engkerbai and Tatum plants and combined with different ratios to produce various shades of reds, browns and yellows. The final yarn, after three days of washing and drying, is then arranged on a wooden frame before the weaving begins.

The Iban believe that nature and living things in the form of birds, animals, insects and plants are closely related to the spirit world. Hence, natural elements such as motifs of plants and animals are often embedded into Pua Kumbu designs. The intricacies of each woven work also serves as the foundation of their beliefs and brings forth a tale known only to trained eye or natives of the Iban culture.

Although it is exclusively associated with the Iban people, Pau Kumbu has largely been synonymous with Sarawak. The unique motifs and patterns of Pua Kumbu have captured the hearts of many and this has led to mass printing in the forms of blouses, bags, scarfs and more.

The commercialisation of Pua Kumbu has value in familiarising the world with the patterns and motifs that are signature to the artform.

The idea behind handmade crafts lies in their exclusivity. When it is made by hand, it takes      time to finish just one. In fact, a piece of Pua Kumbu takes more than a month to finish, which means that only a limited number of pieces can be produced at any given time.

Various efforts such as the one initiated by anthropologist/writer Dr Welyne Jeffrey Jehom, known as the “Rh Gareh Pua Project” have been introduced to help the Iban community to improve their traditional weaving techniques while customising their designs for commercial purposes. Balancing between these two is difficult but extremely necessary to preserve this important intangible cultural heritage.

Atikah Hanafi is a participant in the CENDANA ARTS WRITING MASTERCLASS & MENTORSHIP PROGRAMME 2021.