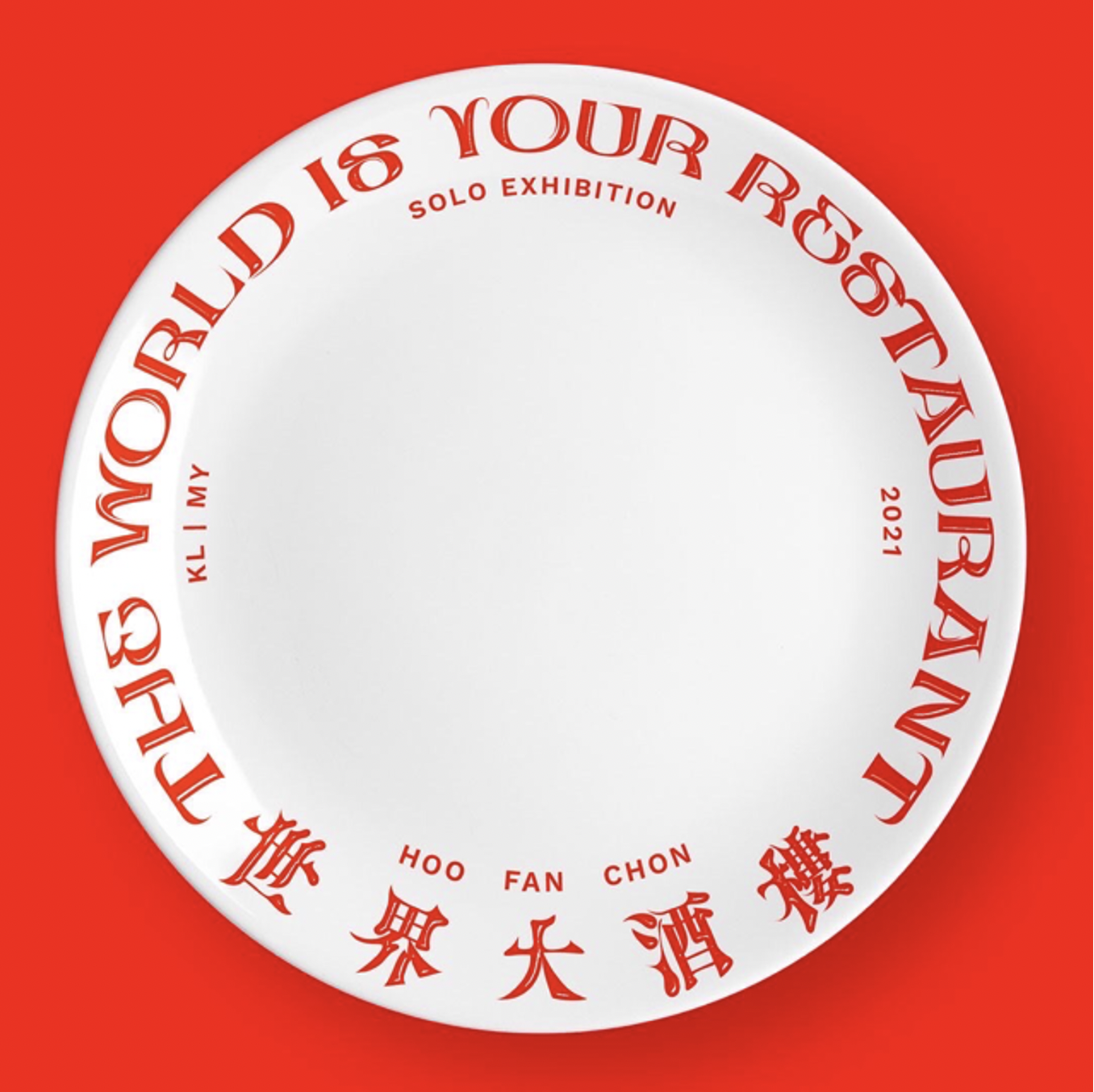 Hoo Fan Chon utilised simple everyday settings to depict the depth in tradition, inviting audience to embark on a journey of reminiscing.

Story and photos by MIRA S for Lensa Seni

Nostalgia is a powerful thing. It helps us retrieve the comforting memories locked up in our minds and extracts the feeling of warmth from what used to be. Artist Hoo Fan Chon shared his nostalgia through his art in an exhibition late last year.

Titled The World Is Your Restaurant, the exhibition offered Hoo the opportunity to lament over his past in the most quintessential Malaysian manner – through the gastronomical experience of eating at a restaurant. From the puzzle pieces of his youth, he shared his occasional experiences of dining at lavish Chinese banquets. In the idyllic Zhongshan Building, Hoo set up a typical setting of a fancy, family-friendly Chinese restaurant accompanied by a group of food related paintings to enhance the mood.

The incorporation of familial elements into his work

The start of the exhibition offered visitors a chance to familiarise themselves with the theme of his work – family. Mounted on the walls were portraits of family members in very vintage style 1970s style framed photos. The subjects had what today’s generation of kids would call “quirky” and “retro” fashion with their puffy sleeves, striped T-shirts and straight cut mom jeans. The sepia toned pictures indicated that they were captured on film cameras and developed in an old school photoshop. Another interesting detail Hoo slipped in, was that the pictures consisted of people eating at Chinese banquets. Maybe they were pictures of his older family members enjoying dinner in the similar setting that slowly evolved with the times. Tradition, like the dishes at Chinese banquet tables, is passed around from one generation to another.

Right after, Hoo offered the audience an intriguing poster of meticulously arranged tiny pictures of fish across it. At first glance, one would think it was an infographic of the different types of fishes and they would be right. Hoo painted kitschy images of the various preparations of fish usually served in a Chinese restaurant over the images of commercial marine fishes on a poster produced by the Fishing Department of Malaysia. Like a gastronomic feast, Hoo depicted the dishes in great detail. They have chives, lemons, chillies and onion rings as garnish and are served on the typical oval white plastic plates. The use of a poster as a canvas to paint dishes exhibits familiarity, considering Hoo grew up in Pulau Ketam, a renowned fishing village. This piece is a merging of both the culture he practises in terms of the food he eats and his upbringing in a town famous for its seafood. In expensive banquet terms, fish is seen as a source of nutrition, but the marine industry is seen as harmful to ecosystem. Hoo could have been raising the issues of class, as privileged diners feast on such meals in fancy restaurants, where they eat nutritious, expensive food at the expense of the environment – which faces destruction left behind  by the ruthless fishing industry. He also included quirky paintings of different types of seafood being deshelled to be eaten. Since peeling shells off prawns and crustaceans can be messy and tedious, doing so for another person is a simple act of love. Many people can relate to the idea of their parents or grandparents scooping out fatty prawn flesh for them and it is a point to reminisce on with fondness.

The merging of culture and art

Next was the main piece, the star of the show. Hoo perfectly encapsulated a Chinese banquet dinner by displaying its core piece – the table setting. Across the table, a bright red soft tablecloth was spread out, the kind commonly used in Chinese restaurants. On the table were the essential condiments such as the red-lid soy sauce in a cylindrical container, a transparent jar of toothpicks and the ultimate starter – a generous serving of roasted peanuts on an orange plastic plate. In the centre was the Maneki-Neko, the one-armed golden waving cat that is believed to welcome good luck and prosperity. Across the table at every seat was a white plate, a pair of chopsticks and the famous clear glass used to drink Chinese oolong tea.

Since folded napkins are also a pivotal part of Chinese culture, Hoo emphasised the fact by placing a book titled “The Art of Napkin Making” on the table. Another interesting element was the rotating tray, and how it was constantly moving in his exhibition to portray its importance in a Chinese banquet setting. The whole process of sharing food, passing dishes and condiments is made easy by a Lazy Susan. The details even spanned to the chairs placed near the table: the red, plastic chairs with the foot rest at the bottom and no back support.

The symbolism of these banquets could also uncover the relationships family members have. Circular tables also provide family members with an easy way to communicate and meals like these usually allow for tighter bonds between kin. There also lay another form of symbolism in the layers of Hoo’s exhibition. Such banquets were a luxury in the 1980s and 90s when successful businessmen would flock to the city to consume delicious food. Perhaps, Hoo was focused on exposing the perks people in the upper class possess when it comes to the luxuries they can spend their money on.

All in all, Hoo did an excellent job of depicting the evergreen tradition of Chinese meals in fancy restaurants. There were so many intricacies to his production and even though the setup itself was simple and mimicked your typical Chinese restaurant, Hoo managed to weave in some personal touches and allow social issues and other matters to surface. The beauty of Hoo’s exhibition was that he played into nostalgia using a very common, everyday setting. Most people have experienced a Chinese dinner at a restaurant, it is a very common activity, especially in cities. He injected some familiarity and accessibility to it, so people from all walks of life would surely have been enamoured by his work. Nostalgia is, after all, a sentiment that should be enjoyed by many.