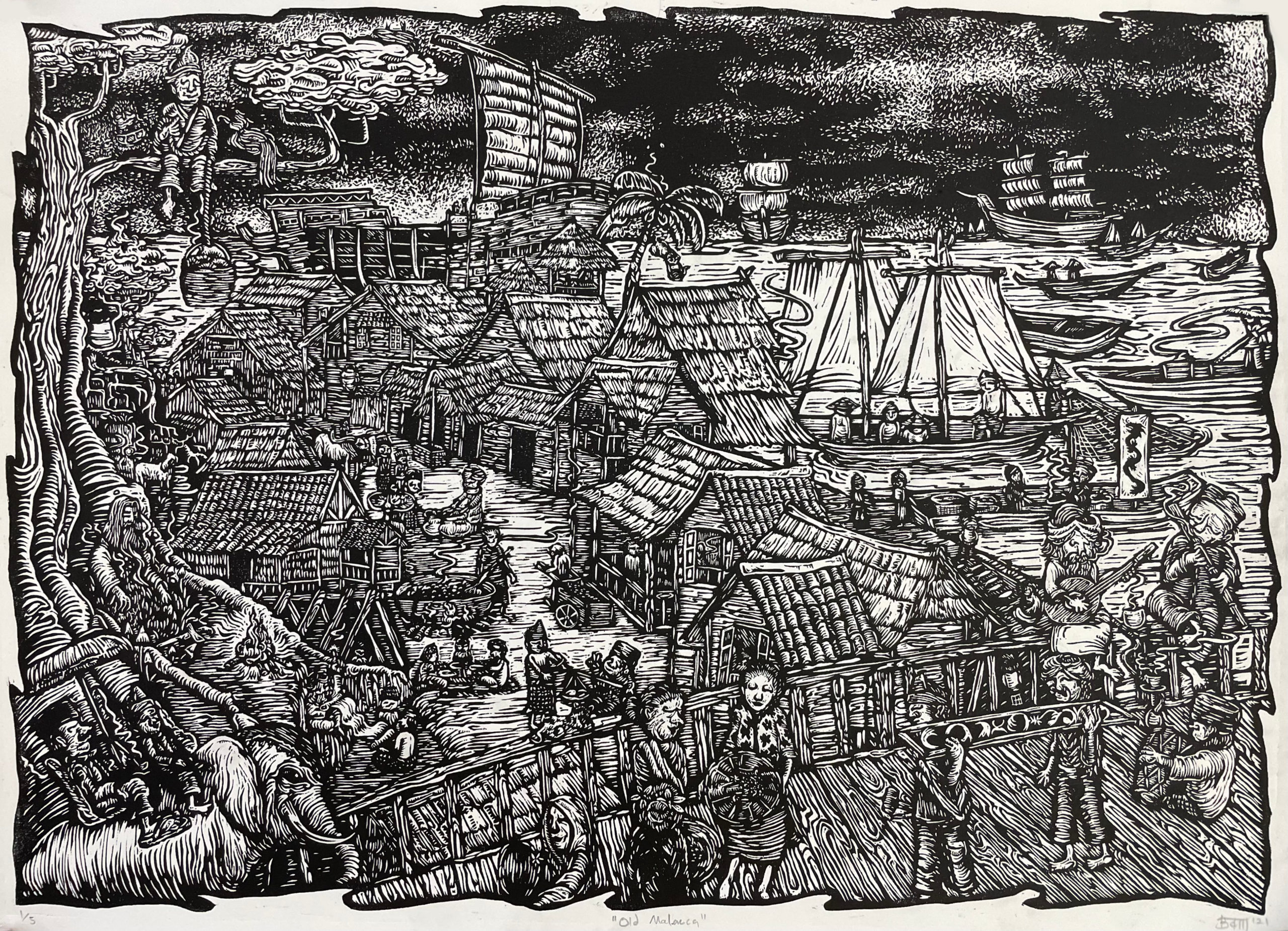 All the Lands Within the Seas at The Back Room KL invites visitors to expand their imagination on the maritime linkages and outward stretches of Melaka as a cultural image.

The word melange comes to mind when thinking about All the Lands Within the Seas: A Visual History of Maritime Melaka, currently on at The Back Room KL until Nov 14.  Archival photos from places as far-flung as Japan and West Africa come into conversation with art from present day Malaysian artists, supplemented by talks by academics on topics such as the position of the Orang Laut in local historical narratives and concepts of Melaka’s hinterlands. The exhibition is by Cloud Projects, a Kuala Lumpur publisher helmed by Lim Sheau Yun and Ong Kar Jin.

So how “Melaka” is this exhibition that bears the historical entrepot’s name? Very much, one posits, but by design not fervently focused on Melaka as landed territory.  All the Lands Within the Seas invites visitors to expand their imagination on the maritime linkages and outward stretches of Melaka as a cultural image, a node of interactions and a notion instrumentalised to advocate certain viewpoints, such as the power and command of a Malay kingdom.

The presentation is appealing. Set against an eggshell blue wall in the cozy Back Room at the Zhongshan Building, framed images hang in groups, reminiscent of artful interior design catalogues where frames of different sizes are arranged to form a unified assemblage with their own language. The catalogue of exhibit captions and the curatorial statement can be a lot to take in at one go, but there are other ways of engaging.

For example, Ong Kar Jin’s curatorial tour video. Going for around 30 minutes, it does that helpful thing of welcoming visitors, sharing a little bit about the exhibition’s background and highlighting a select few exhibits. The tour breaks things down into digestible smaller pieces. This is especially helpful given the expanse of the topics covered, going from histories of slavery in the Nusantara to imperial battles in Venice.

The reflexive tone of the curatorial statement conveys an embrace of a state of not knowing. The opening line announces the project’s roots in the notion of absence, while the treatment of Melaka is described as such:

“We take Melaka not as a centre, but as a point of transit: we travel its world, from the reaches of the politics of Deshima, Venice, Havana and Masulipatnam; its dwellers and sojourners from the Orang Laut, the Sama-Bajau and the Luçones; to the Dutch, British and Portuguese colonists who sought to capture it.”

The inclusion of woodcut prints by Bam Hizal, a Sabahan artist and member of art collective Pangrok Sulap, seems a bit out of left field at first instance, considering how steeped in history and Melaka the exhibition is. But then again, why not? This is an exhibition comfortable in disparity and diversity. Overarching themes do emerge.

Bam Hizal’s Imperialismo orients one well to the exhibition. On the wavy seas, a large wooden ship takes centre stage, a flag that reads “1511-1641” jutting out from its side, which one understands as the years of Portuguese conquest of Melaka before the Dutch took over. Practically cowering in its presence are sampans with anchors and spanners with “empire”, “monopoly”, “new order” and “conquer” written on them. In the corner on the back of one sampan is “Daulat Tuanku” in Jawi script.

Another local artist featured is Amanda Gayle, with digital collages that integrate cartographic images in hues that suggest the passing of time and keepsakes.

Interested visitors can also partake in a series of accompanying talks such as The Orang Laut in the Sea of Islands by Dr Leonard Y. Andaya from the University of Hawai’i, available for viewing here.

As a research and text heavy exhibition dealing with history, nation states and the not quite nations, All the Lands Within the Seas reminds one of In Our Best Interests  held last year at Nanyang Technological University.

It is an example of how history can be understood from a variety of sources, including an exhibition that assumes liberties in interpretation, dances about and enjoins playful imagination in understanding a historical port city.

For more on the exhibition, visit the The Back Room KL’s FB.