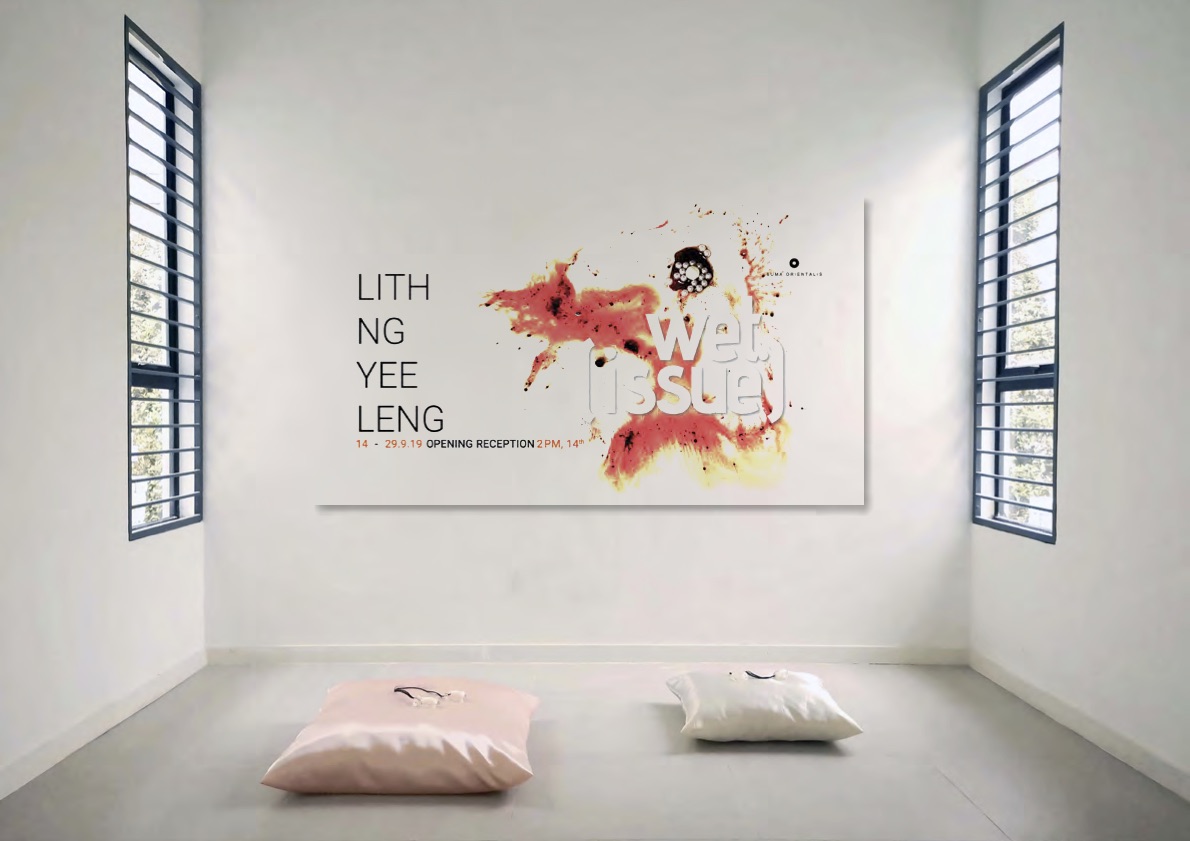 Artist Lith Ng Yee Leng encapsulates the gritty, ‘dirty’ aspects of owning a vagina – the bleeding, the pain, the excretion of various fluids – with sculptural resin as her medium of choice. Ng’s entire show was built around the growing pains of womanhood, through which she wanted to embrace all things that were deemed “gross”. This made for a very intimate body of work that would definitely touch certain members of the audience.

As a viewer, her work without a doubt gave me a very visceral experience. Perhaps it’s my haemophobia at play but the bloody visuals prevalent in the show definitely made my knees feel a little jelly-like. Her display, Everyday a Part of Me Dies With Time, which featured a large resin rectangle with an abstract arrangement of henna to mimic blood splattered on bathroom tiles, was the first thing to catch my eye in the entire exhibition, and not only because of its large size. In the formalist sense, the arrangement of the dotted streaks of henna in an almost uniformed flow is undoubtedly pleasing to the eye. Blood on bathroom tiles are a familiar sight to the monthly bleeder, and I think she managed to portray it in a way that immediately reminds the knowing viewer of the less-than-pleasant event. Her play on the theme of bleeding also makes me think of miscarriages that women have had to endure, perhaps alone in the shower.

In a smaller room, her display entitled “The Instinctive Playground is The Only Luxury I Dream Of” was also a standout. It consisted of resin moulded in condoms with synthetic pearls dangling from metal chains on a metal clothes rack. Meant to represent ovarian cysts and fibroids, the work made me think of how these very common physical ailments are rarely openly discussed. Her use of chains came across to me as a reminder that at the end of the day, we are chained to our bodies and every possible complication that comes with being human . It also made me think about how an entire faction of society is chained to these possible health complications merely because of the genitalia we were born with.

Some of her more aptly named pieces were “I Put You On A Pedestal, You Put Me On The Pill”, which featured red stained resin flowing down a wooden block and “Let Me Know When You’re Done With Me”, which featured a single piece of condom-moulded resin with a steel chain over it. The visual experience aside, her titles felt equally impactful. These two pieces in particular depict the struggles of being sexually active as a woman, from the risk of pregnancy to societal stigma to being viewed only as an object of sexual desire from the male species. Through her work, she indicates that women bear the brunt of the burden in the area of birth control – far greater than the burden put on men. Her titles brought out in me feelings of helplessness and disappointment.

The recurring elements in her artwork such as hair and blood are very normal, everyday things within the female human experience, but are never discussed openly in conservative Malaysia where they are still considered taboo. Social stigma surrounding the female body rules how we discuss – or rather, not discuss – these issues. The recurring theme of sex in her artistic expression is uncommon in a country where censorship is a major barrier to self-expression.  What some might find off-putting  about her work makes me appreciate it even more. The honesty and rawness in her art is remarkable and brave, and highlights the urgency of creating open – and potentially life-saving – dialogue around women’s bodies

Natasha P. is a participant of the CENDANA – ASWARA Arts Writing Mentorship Programme 2020-2021