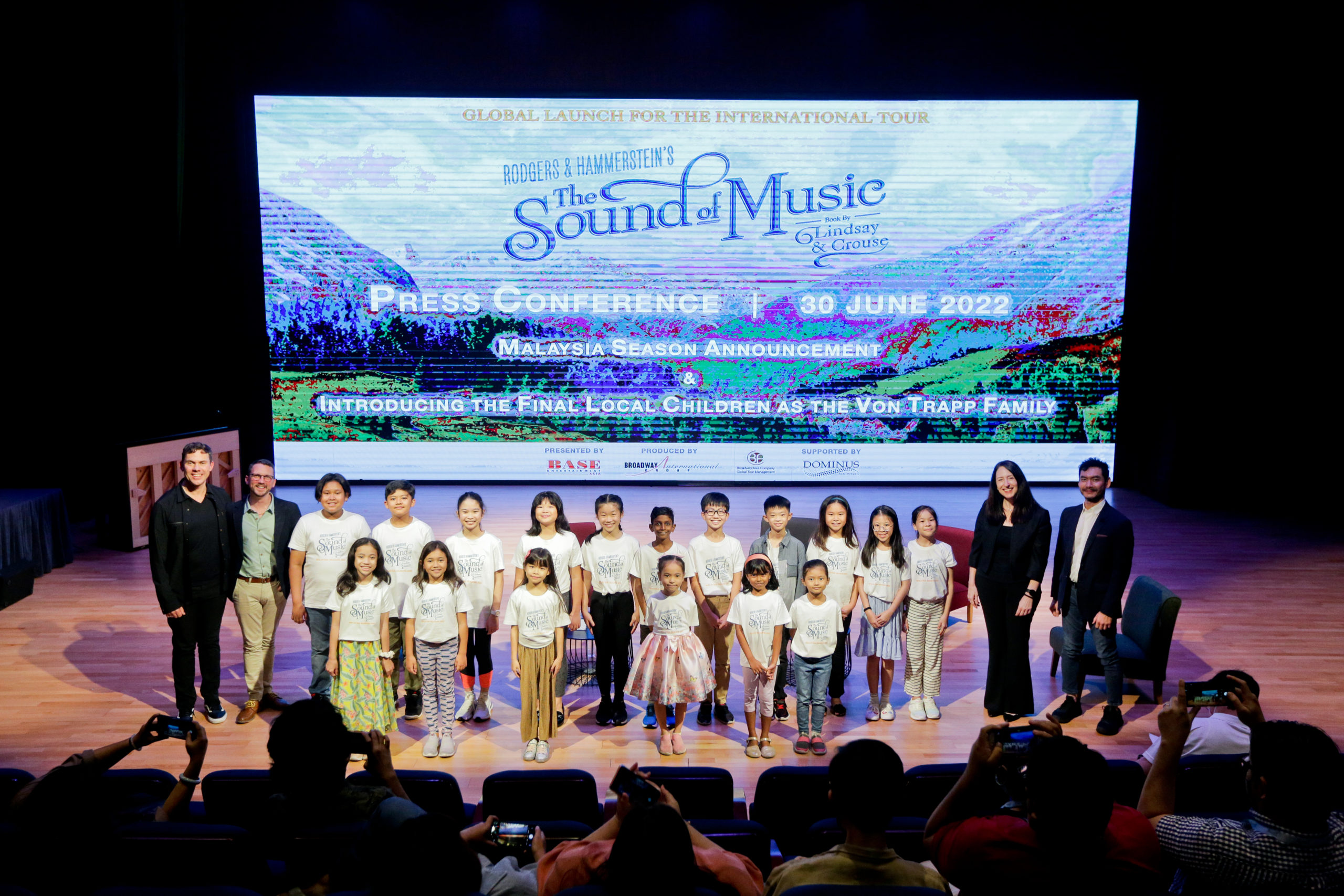 The Broadway production has found its Von Trapp children in Malaysia; 17 chosen from over 400 hopefuls.

The Sound of Music, one of the world’s best-loved musicals, is set to premiere in Malaysia this December, performed by a Broadway cast and featuring Malaysian children in the roles of the six younger von Trapp children.

Winning five Tony awards including Best Musical and spawning multiple live productions and adaptations across the world, the musical tells the true story of Maria, the governess who enters the lives of Captain von Trapp and his seven children, and re-introduces them to the joys of music. They make their escape together over the Austrian mountains amidst the turmoil preceding the outbreak of World War II.

“For us, The Sound of Music was just the logical musical to bring to Malaysia,” says Chantal Prudhomme, Chief Executive Officer of Base Entertainment Asia, presenter of the production. “We were thinking, ‘what do we want as the first musical post-pandemic?’ Well, we wanted something happy. The Sound of Music was the perfect choice for that. It’s a beautiful, classical story. It’s about family, it’s about love, it’s about getting over adversity. And that’s universal.”

After a nationwide search for children to play the roles of the von Trapp children, The Sound of Music held its auditions from June 28 to 29. The response was far beyond anything the production had expected, as over 400 children and their parents from all over Malaysia showed up for auditions, each hoping to be chosen to be a part of this momentous production.

Clearly, there is no shortage of interest in the performing arts in Malaysia. “I’ve never seen anything like this,” Prudhomme says, remembering her surprise at seeing hundreds of people waiting at the gates of Dominus Arts Venue, Wangsa Maju, Kuala Lumpur where the auditions took place. “We were blown away when we were told the number of children who had registered for these auditions,” Anthony C. Daniel, associate tour director adds. “How in the world are we going to see that many children?”

Nevertheless, they made it work, and after two days of auditions, 17 children were chosen to play the six von Trapps, and perform in rotation throughout the Malaysia season.

Daniel, James Gray, and Nate Patten from the Broadway creative team travelled all the way to Malaysia from New York to personally choose the children. The overall energy during the auditions was highly positive. The children supported each other with great camaraderie and innocent joy, while their parents beamed proudly at them. The creatives from Broadway treated the children with the utmost respect, patience and enthusiasm.

All the children who had come for the audition were put through acting, singing and dancing auditions in order to select the best possible fits for the roles. First, the children were brought into the auditorium and asked to sing lines from the musical with accompanying music. The most outstanding children were then chosen to move on to subsequent rounds of auditions. Their height was also measured to ensure that they would match the height of the characters: the von Trapp kids’ height and age are directly proportional – with older children being taller than their younger counterparts. “We changed the way we did the audition so that we could give enough time to every child,” Daniel says. “I do not want this to be like a factory. We made sure every child had their time.”

Other than their performing ability, the personalities of the children were also something the creative team emphasized. “We really wanted to make sure that every one of these children brings an essence of themselves to the show,” Daniel says. “Not just ‘can you sing the songs, can you hit the right notes’, but really finding their individuality and personality, because that’s what makes these children so special. I have to say, the talent that we saw is phenomenal. And that made it even harder to make a choice. It has been a wonderful two days of being blown away by such incredible talent here.”

From now up until the premiere in December, the children will undergo training and rehearsals to prepare themselves for their roles. Their formal education will not be neglected either. “There’s a tutor who helps balance the rehearsal hours with schooling hours,” Daniel says. “For the first couple of weeks, they’ll be doing rehearsals in the evenings after school, and on weekends. As we get closer to the show, having multiple casts of the children helps us balance the workload and rotate through the casts. The schoolwork is just as important as the show.”

Hopefully, the astounding response to the auditions and the success in finding the von Trapp children will encourage future international performing arts productions to cast Malaysians as well or otherwise provide job opportunities to Malaysians. The 17 children will not be the only Malaysians involved in The Sound of Music. More than 100 Malaysians will be engaged to work on the lights, stage, coordination and food for the production, bringing much-appreciated economic opportunities for different sectors adjacent to the performing arts industry in Malaysia.

The Sound of Music will premiere in Malaysia on Dec 27, 2022, and run until Jan 8, 2023. Tickets have already gone on sale. Hurry on over to the website before they sell out!