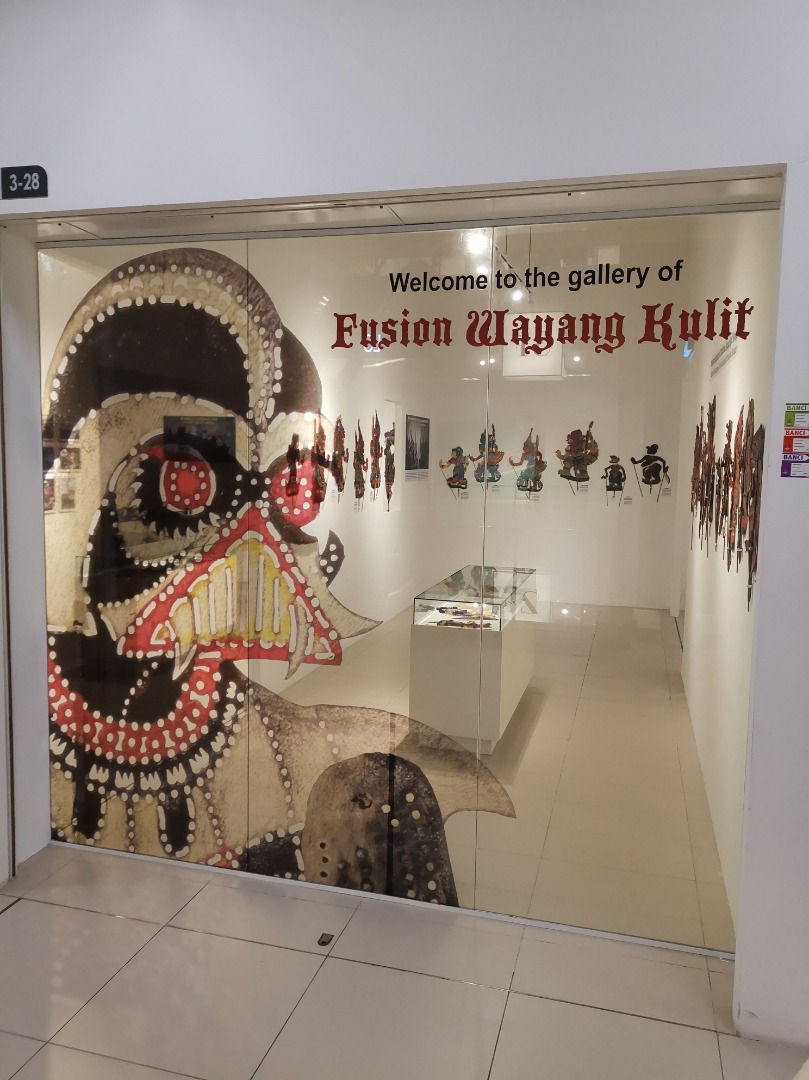 Here at the Fusion Wayang Kulit gallery, the traditional art of wayang kulit is given the superhero treatment.

As I ride the escalator up to Level 3 at the GMBB Mall in Bukit Bintang, Kuala Lumpur, I am immediately greeted by a stark image of Darth Vader on a glass wall. With a look of imposing menace, this figure towers over me, a larger-than-life presence who stares at viewers passing by, as if beckoning them to join the dark side.

Or perhaps, on a less sinister note, his image welcomes visitors into the gallery of Fusion Wayang Kulit.

Having heard about this modernised take on the art of shadow puppet storytelling, and wanting to know more, I visited the space after reading up about the gallery’s concept and its organisation’s humble beginnings.

Fusion Wayang Kulit (FWK) started out in 2012 as a collaborative project between its founder Tintoy Chuo and co-founder / art director Take Huat. The initial idea was to revitalise the dying interest in wayang kulit by merging shadow puppetry’s traditional form with modern pop culture to tell stories for a new age.

FWK’s first project was a retelling of the epic Star Wars franchise, renamed as Peperangan Bintang, which has been met with applause and critical acclaim – even recognised by Lucasfilm Ltd, the production company and creators of the Star Wars franchise.

Since then, FWK has gone on to present its puppets and host performances worldwide while gaining the interest of a diversified audience. This award-winning team continues to add to its collection of puppets by adapting a number of well-known characters from superhero movies and Hollywood blockbusters. The gallery officially opened in 2019, and now offers visitors a brief yet tantalising view into the world of wayang kulit, while getting to see these beautifully designed puppets up close.

But to fully appreciate the new changes to this art form, one should first go back to its traditional roots. The gallery first introduces us to characters from the Ramayana, one of the oldest epics from ancient India, and an early staple of wayang kulit performances. We get a glimpse of heroic warriors such as Lord Rama and Hanuman the monkey god, along with the evil Ravana and his minions, as both sides clash in a spectacular battle. There is also a display of characters from traditional Malay folklore, showing necessary innovation as wayang kulit has spread from its origins in Javanese culture to other South-East Asian countries including Malaysia, where it is still performed today in the state of Kelantan.

Of course, the main attractions here are the various puppets from Peperangan Bintang, particularly Darth Vader – renamed as Sangkala Vadeh, the first puppet created by FWK. Just as Vader is an instantly recognisable icon from Star Wars, it is only fitting that his wayang kulit counterpart becomes the face of this gallery. After all, Sangkala Vadeh’s giant face is literally the first thing visitors see when they step in.

Upon a closer look, I noticed how Vadeh’s mouthpiece has been modified to have two tusks curling downwards, while his lightsaber, despite being a futuristic weapon, has been redesigned with flame motifs surrounding its blade. Fiery motifs appear to be a common design adorning the costumes of these puppets. For the finishing touch, Sangkala Vadeh stands atop a vessel combining the futuristic look of the Imperial Star Destroyer as well as traditional patterns from an ancient Malay war ship. Although the characters from Peperangan Bintang are adapted directly from the Star Wars movies, it is fascinating to see how a blend of tradition and modernity have resulted in their final designs.

Another notable example is the Stormtrooper puppet (Hulubalang Empayar), which has an unusual yet intriguing approach, even for a supporting character. It is mostly painted white, a colour often associated with good and purity. Yet the Stormtrooper’s evil nature is still reflected through its design that closely resembles a skeleton, complete with a blaster that looks like a ribcage up close. This puppet also has a black version, renamed Hulubalang Maut, a nod to the Death Troopers from Star Wars: Rogue One.

A mounted screen in the gallery’s centre allows visitors a chance to watch some of FWK’s previous performances, as well as to witness the creation of these unique puppets.

From some of the clips shown, Tintoy Chuo describes the extensive detail that goes into creating the basis of a character, and then sketching out the designs onto paper.

“The first thing is the design. Of course, I have my master around, so I’ll ask him to make sure that this is done correctly according to the format of wayang kulit,” says Tintoy, referring to FWK’s wayang kulit authority and tok dalang (or puppeteer), Pak Dain, on the traditional elements that need to be retained in each puppet.

Next up, a glass case display depicts a step-by-step procedure of how the finished paper designs are pasted and cut onto cowhide, before coloured markers are used for the finished look, and some wooden sticks added to allow for movement of the puppet’s joints. The use of colours is especially important for Malaysian wayang kulit, as the audience should be able to see the puppet’s distinctive colours even when projected behind a huge screen.

But FWK is not limiting itself to Star Wars. Some of the team’s most recognised puppets are superheroes from both the Marvel and DC films. It was a joy to walk through the gallery and discover the wayang kulit renditions of the Avengers, and even members of the Justice League such as Superman, Batman and Wonder Woman.

These puppets have been meticulously designed, and even for non-Marvel or DC fans, it is still easy to identify the good guys and bad guys based on the puppets’ appearances. The heroes are given more human-like faces and bright colours for their costumes, while the villains have sharp and elongated teeth, and their facial expressions contorted into monstrous grins.

Naturally, being a fan of Star Wars and superheroes, I spent longer than intended at this gallery, completely immersed in this refreshing take on beloved pop culture characters.

As someone who teaches media studies, I have also noticed the similarities between the nature of wayang kulit performances and superhero movies. With both art forms drawing heavily on inspirations from myths and archetypes, the thematic core of good versus evil has been constantly adapted and retold for generations to enjoy.

Before leaving, I felt reassured in the idea that wayang kulit lives on with a blend of traditional and modern aesthetics in each puppet, thus maintaining the sacredness of this art whilst still being relevant to a larger audience.