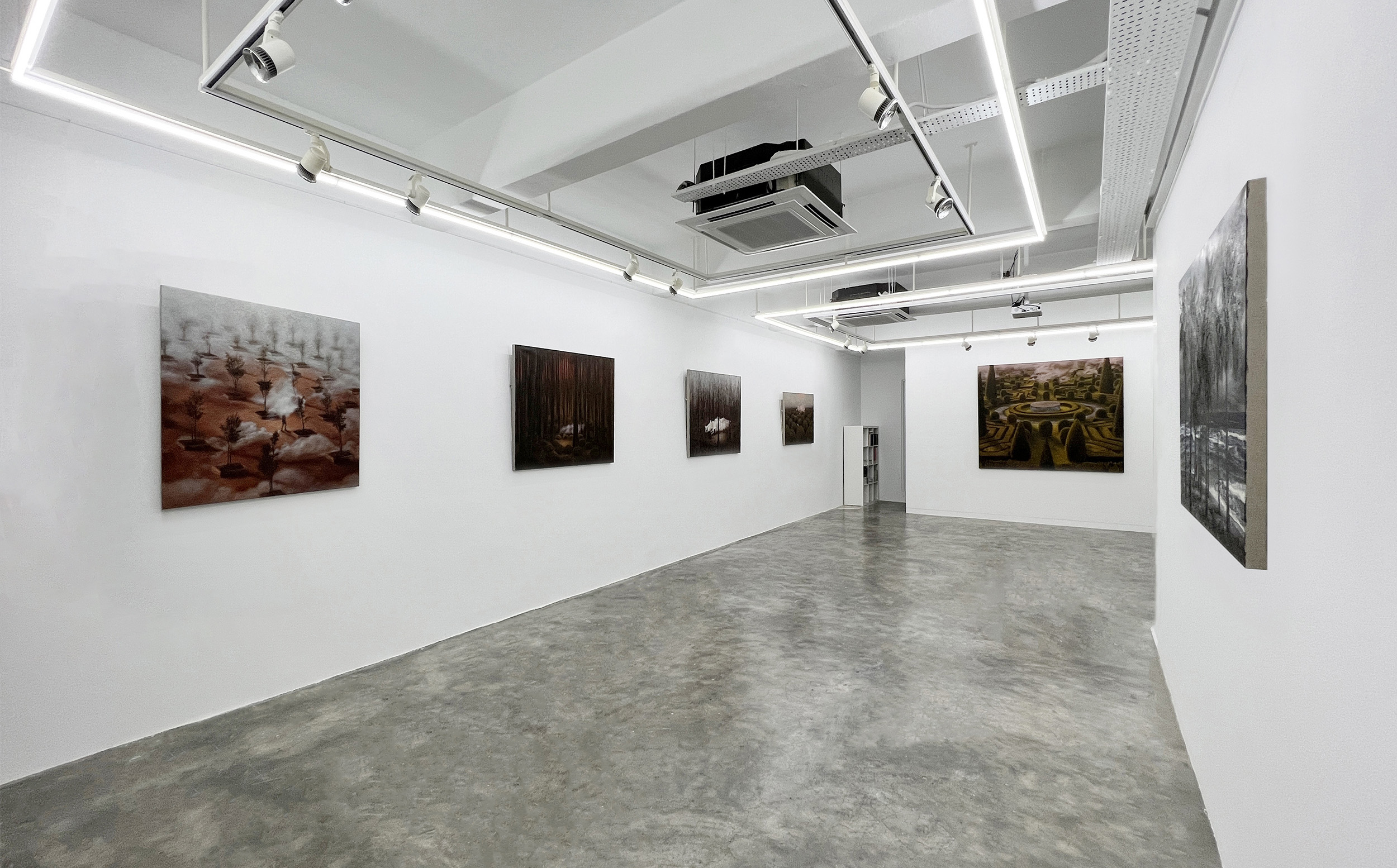 “Harvest”, Pachara Piyasongsoot’s first solo exhibition in Malaysia, featured 10 of his latest oil paintings. His surrealist landscapes lament the military’s consistent interference in Thailand’s political matters and left us wondering, ‘What are we left with when our political decisions are increasingly made in the interest of stability?’

A garden has a variety of associations depending on its context. Within a neighbourhood, it might be a place to unwind after a day’s work and for children to run free. In a religious setting, it could be associated with introspection, purity, and paradise.

However, when looking back into history, it is also often an expression of power by rulers, of control over the natural world and the people who live in their reign. These were some of the recurring themes found in Harvest, Pachara Piyasongsoot’s exhibition displaying 10 of his latest oil paintings at Richard Koh Fine Art last November.

This series featured a range of visual metaphors, through which Piyasongsoot laments the military’s consistent interference in Thailand’s political matters. From overthrowing absolute monarchy in 1932 to the rise of the current military junta in 2014, coup d’etats have been a consistent part of the nation’s political processes.

Mounted on the brilliantly white walls of the gallery was a set of ominously surreal imageries. The vast and mystifying landscapes were rendered with dark muddy colours setting the tone of the show and gave an emotional weight to the atmosphere, the kind that a non-Thai visitor may not fully grasp but could sympathise with.

The paintings were generously sized, allowing for a range of experiences at different distances.

The title “Horse Play Dead” suggests a naïve reading of the painting, which is then subverted by the painting itself. An imposing tree is placed dead centre with a suffocating crop applied to the top and sides, this composition is carefully planned to evoke an unnerving visual tension. The trees here are in uniform, arranged and trimmed into rows of cylinders. Under the shadows of these foreboding cypresses lies a foal in its playful innocence.

A field of well-manicured boxwood hedges lay across the ground of “The Beach”. By applying paint with a palette knife, Piyasongsoot renders the rough edges of the leaves up close that when seen at a distance, turn into an even texture, fuzzy yet still gripping to the eye.

Slightly off center is a figure made to look small in comparison to the oversized hedges, curled up in a fetal position, as if to mimic the shape of the hedges. The fabric on his back is painted with a muted flesh pink and tender brush strokes, conveying a sense of vulnerability against the violent impasto of the hedges.

The largest painting in this series, “French Garden”, is unambiguous with its reference. The principle of formal French gardens lies in the celebration of what was believed to be our innate human trait, rationality, as the source of truth and ultimate beauty.

This is what allows for the manipulation of our environment, from the scale of shaping the land we stand on, to moving bodies of water to our fancy, and clipping the leaves of hedges into perfect volumes, all to suit the needs and desires of those in power.

From design to construction, landscaping has always had a close relationship to power. André Le Nôtre designed the garden at Versailles to have paths that would accommodate military parades for the royal family. In construction, the technology to move earth into shaping ramparts or defensive barriers for warfare was also deployed in gardens to form stepped terraces where the royalties could have their promenades.

However, it is not enough simply to have control; it must be expressed with confidence and grandiose to convince other parties of our prowess. Hence, the adjacent painting “Toys”, where the trees resemble chess pieces neatly arranged by an unseen entity, raises the question of who is being played by who, and to whose benefit?

In contrast to Piyasongsoot’s previous exhibition, Eternity Village, 2020, where he surveys a village in poverty and paints their built environment at eye level, the views in Harvest are set beyond human height, far above ground looking over the garden. This ties back to the belief in rationality as a higher plane of existence and of truth, but also physically to the stepped terraces where royalties would have commanding views over their subjects and the little paradise that they have made for themselves.

Unlike the ever-expanding landscapes in the other pieces, the elusive “Gardener in Red” presents to us an island of trees in the face of a storm. Their leaves remain stiff amidst the wind, and their barks have turned into steel.

The crashing waves are captured through a turbulent undercurrent of brushwork, with the energetic splatters and impasto above forming the wave’s crest. The gardener wearing a red shirt pulls a pipe from far away, standing firmly doing his job of watering. But why is he watering trees next to the sea? Why is he watering when a storm is brewing? And looking closer, why is he watering at the sea?

This first solo exhibition of Piyasongsoot’s work in Malaysia was clearly rooted in the daily life of Thais, references such as the lamp posts in “There is no no.979” and the title of the piece “Himmapan” would resonate more intimately to the heart of a Thai than they would to foreigners.

However, even when viewing from outside of Thai culture, these breathtakingly haunting landscapes should stop us in our tracks to reflect on our “progress”. They might lead us to ask, what are we left with when our political decisions are increasingly made in the interest of stability? Just as the rationality of the 17th century serves only the royal family, who is benefitting from the rationality of today? And who are the ones left behind?