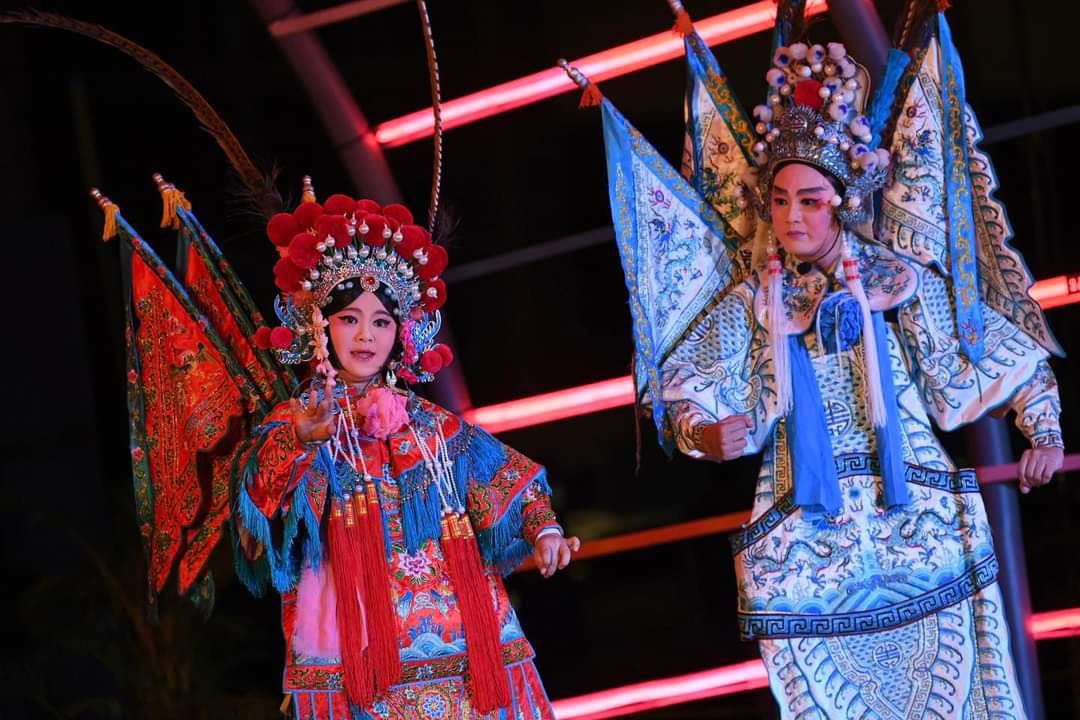 Ling Goh of Teochew Puppet and Opera House talks about the history and the real meaning of Teochew opera.

If you grew up in a Chinese household, you would probably be keenly aware of the Hungry Ghost Festival, otherwise known as Zhongyuan Festival. Your parents would have surely told you about the myriad customs and superstitions dictating what you can and cannot do during the month, and you may have seen the entertainment put on for both living and dead in the form of getai and Teochew opera. But other than knowing not to sit in the empty front row reserved for ghosts, how much do you really know about the ancient tradition of Teochew opera?

Two performers in painted faces and ornate robes of the Chinese ancients move around the stage languidly, singing to each other in warbling falsettos. Their deliberate movements are accompanied by the energetic melodies of traditional Chinese instruments. This is a Teochew opera performance of Butterfly Lovers: Maiden Meeting, an ancient Chinese love story as recognised among the Chinese community as Romeo and Juliet is in the West.

Ling Goh, the founder and director of Teochew Puppet and Opera House, a puppet show museum and performance space, says that Teochew puppetry had its origins in two-dimensional shadow puppets performances similar to Wayang Kulit in the Central Plain of China. The puppets were made of dried leather and controlled by iron rods. In a twist of fate, refugees fleeing from barbarians during the Southern Song period brought the art form to Chaoshan in eastern Guangdong, China. In the Teochew-speaking land of Chaoshan, the two-dimensional shadow puppets gained a third dimension, becoming more realistic.

The next step was the creation of the Teochew opera we know today. Teochew puppet performers of old wanted to infuse their performances with a larger-than-life sense of grandiosity. The logical evolution was moving from manipulating the puppets by hand to actually playing the roles themselves. Goh states that the stories performed on the stage included romance tales and ghost stories from the Ming, Tang and Qing dynasties. The elaborate costumes and flamboyant makeup are synonymous with classic Teochew opera, allowing the performers to stand out and highlight their facial expressions. Without it, much immersion would be lost and the impact of the scenes would be lessened.

In the past couple of years, all public performances were put on hold due to the Covid-19 pandemic. This year, Teochew opera, just like its more modern brethren, can finally return to the public stage. BASKL speaks to Goh as she returns to public performances after the forced hiatus.

Goh, hailing from an unbroken line of opera performers stretching back into the 19th century, has been surrounded since birth by the operatic tradition of her ancestors, who brought the tradition from Chaozhou, China into then-Malaya centuries ago. Her mother, Toh Ai Hwa was the founder of Kim Giak Low Choon Puppet Troupe in 1989. She and other experts trained Goh since she was seven years old to skillfully manipulate the iron-rod puppets and to masterfully embody each prominent archetype of character in Teochew opera, although usually, she takes on the female characters. In her training, she was also schooled in opera singing and instruments like the drums and dulcimer. With her wealth of experience, Goh is a foremost authority on the Teochew performing arts in Malaysia.

During the pandemic, Goh’s Teochew Puppet and Opera House was not exactly sitting idle. “We did do a few online activities and classes,” Goh says. “We also accepted projects, so we didn’t completely stop. But now, slowly, the temples have started to open up again for religious activities, and this month during the Hungry Ghost Festival, we’re operating at a hundred per cent capacity again.

“Actually opera and puppet shows originated from the Chinese imperial court,” Goh says. “But eventually the tradition spread to the common folk of China. These cultural performances became linked to prayer, a way to communicate with and thank the gods. There were then two meanings to the performances, one to thank the gods, and one to entertain the audiences. Unfortunately, as people started to encounter modern forms of entertainment, like pop music, for example, they lost their appreciation for traditional performances. And now people think the opera is done just for the gods or the ghosts, when actually it should also be for the people”

Goh also believes that the classes that her puppet and opera house, and other classes like them, help to teach people the culture and meaning behind the performances. “Once you understand, you will start to appreciate,” she says succinctly.

Goh also wants to dispel the aura of superstition surrounding Teochew opera. “A lot of old people teach the young that these opera performances are something to be wary of, due to the associations with ghosts. They will then become afraid of doing or saying something wrong at the performance and end up not attending. While we must appreciate and respect the religious aspects, we should stay away from superstition and encourage children and youth to see it as a cultural thing.

“I think it is also important to modernize,” Goh adds. “Social media is good for reaching out to the younger generation. Once they see the beauty of opera, they’ll be captivated and more willing to open themselves up to appreciating it. We also had crossovers with different artists. Recently I also performed a local Malaysian story, Si Tanggang, using Teochew puppets.”

Goh has also experimented with incorporating modern stage elements like projections, jazz bands and subtitles, so that her work can be admired by a larger, more modern population.

“Operas and puppet shows are Chinese culture,” Goh says seriously. “And they communicate many positive moral values that are integral to Chinese culture. It’s something very beautiful and important that needs to be passed on to our audience, and a society that sorely needs these traits – filial piety, loyalty in love and friendship, humility.”

Goh and her troupe will be performing in Penang at temples in Lebuh Cecil on Aug 13 and 14, Campbell Street Market on Aug 18 and 19, as well as Lebuh Armenian on Aug 24 to 26. Check out Teochew Puppet and Opera House’s website and Facebook page for more!