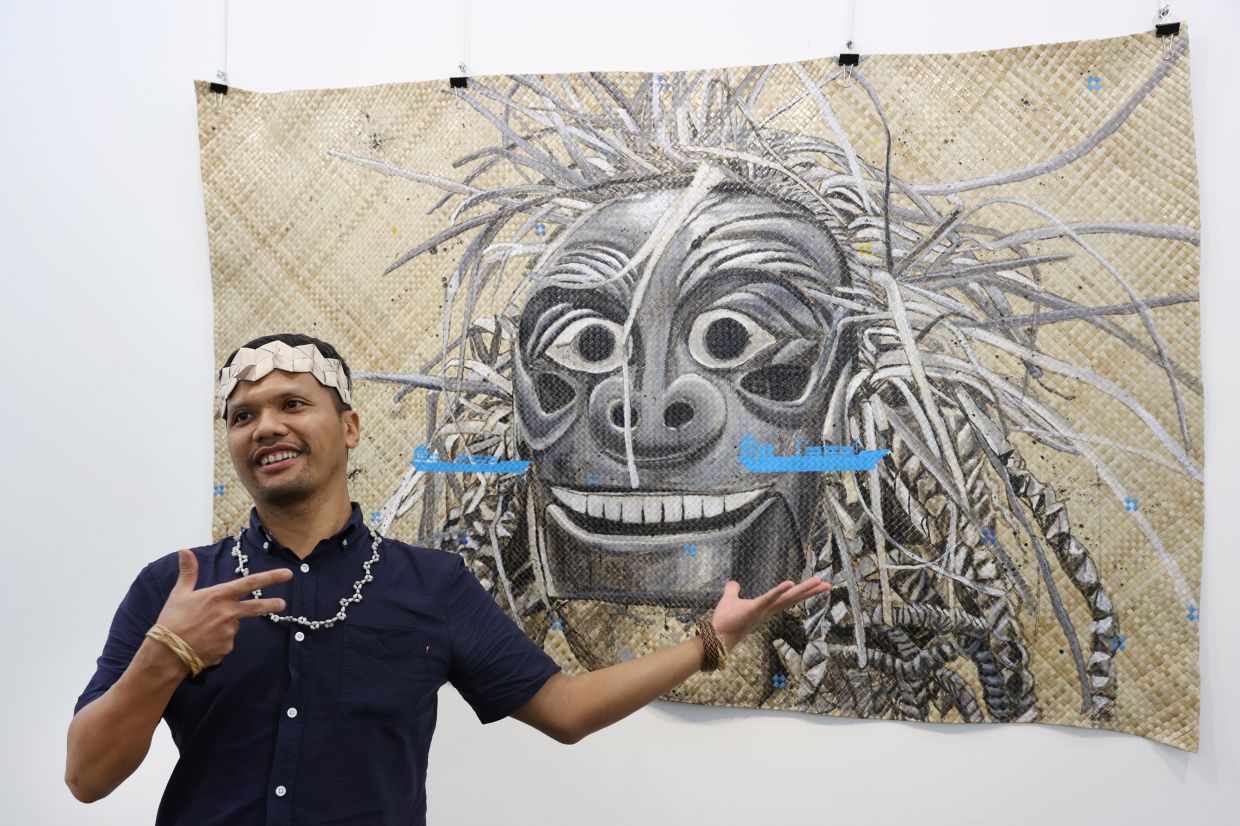 By MURGAN GOVINDASAMY for Lensa Seni

Art is more than just pretty paintings or magnificent sculptures. Though it can be just that, often, the aesthetic of a piece is but a junior partner in its relationship with the message or the story that piece is built around. It is just a fact of life, even outside of art: our stories and how we choose to tell them are what defines us and our world. In the case of Shahar “Shaq” Koyok, there are very few stories that are as important as the one he aims to tell: that of the Orang Asli people.

Hailing from the Temuan tribe, an Orang Asli ethnic group native to the western parts of Peninsular Malaysia, Shaq Koyok uses various mediums of visual art to showcase his culture and highlight social issues faced by Orang Asli communities. In order to speak about his works, it is important to establish what these issues are to begin with.

The Orang Asli have for a very long time had a delicate way of life rooted in tradition, communal ties and balance with nature. In the modern day, however, with deforestation, climate change and the displacement of their communities, the Orang Asli find themselves facing difficulties in sustaining that traditional way of life. Unfortunately, as our country heads into the modern world with full steam, the Orang Asli may not be able to resist the force of development but face the lack of the avenues necessary to fully integrate with modern society.

Shaq Koyok uses his art as a form of activism to fight for land rights and culture, among other things. From the outside looking in, the career of Shaq Koyok also explores important questions, such as what place will the Orang Asli have in this new world, at what cost does this development come with, and how can they, without their traditional way of life and dwindling numbers, retain their culture, heritage, and identity.

Shaq Koyok uses a multitude of media, fusing old and new in his works. He uses traditional Temuan woven baskets and mats as well as oil and acrylic paints. In his earlier works, he utilised acrylic on canvas media in a kind of stylized realist way to symbolise the dilemma the Orang Asli find themselves in. The common theme in many of these works is that they normally present tribesmen, painted in a rainbow of colours set against a backdrop of the threats to their community painted in bleak and realistic colours. Such works include “Still Life: the Fall” where a rainbow coloured tribesman is seen in free fall into a table with alcohol and oil palm seeds spread on top, and “Confession of Palm Oil” where tribesmen stand facing a field of palm oil saplings. The contrasting colours of the subject and the backdrop here are deliberate, with the rainbow colours representing the purity and spirit of the tribesmen and the bleak backdrop representing the ills that modernity brings to the Orang Asli, often just for the sake of palm oil profits. These works, though presenting powerful messages, seem somewhat generic and the symbolisms used seem a little too over the top from a purely artistic sense.

His later works, however, show much greater artistic maturity and distinctive style. In his exhibition “Land of a Thousand Guilts” held in March 2021, Shaq Koyok presented numerous pieces painted on Temuan woven baskets and mats besides just canvas works.

The weavings were done by his own family members and friends. This added another dimension to the artwork, as it was a subtle nod to the communal and self-sufficient way of life the Temuan would have led in their villages, where people bonded strongly and relied on each other. These tapestries were used as a canvas by Shaq to provide a painted depiction of everyday life in the Orang Asli village.

The focus seems to be on the people themselves, more than the surroundings, with subjects including men and women, of all ages. These works focus more on the purity and the innocence of life in the villages with pride, and act more as a reminder of what could be lost.

Almost poetically, this not only applies to the culture and livelihood of the Orang Asli in the paintings themselves, but also the very material that the mats on which Shaq Koyok paints on, the pandanus leaves, which are becoming increasingly scarce.

The progression of Shaq Koyok as an artist is a remarkable one. Besides sticking to one medium, he is willing to use a multitude of methods to further his fight for Orang Asli identity and rights.

However, the rise of Shaq Koyok is also an important one in highlighting the problems his people face as they are often left as an afterthought in public discourse. In a country where many Orang Asli are living in extreme poverty, their children have high school dropout rates, and they are constantly displaced from their ancestral lands, Shaq Koyok stands defiantly proud, not against the modern world, but within it as a success story.

The knowledge, customs, stories and ideas of the Orang Asli are traditionally passed on from times unknown to present day through oral tradition generation after generation within their tribes.

This is why their way of life is so fragile. In order to maintain the succession of knowledge, strong communal bonds and a sacred relationship with the land are necessary. When they are thrust into the modern world they are separated from their ancestral land, and their communities risk being broken down. Consequently, their stories stop being passed down and ultimately may never get heard.

Activist art like Shaq Koyok’s is key, as it serves to break this silence by combining old and new, contemporary art with traditional inspiration to perpetuate the passing of these stories and ensuring these issues become central in public discourse.

From a community whose fate has often been decided for them by outsiders, Shaq Koyok stands not only to bring attention to their issues, but he is also a symbol of hope and self determination, using his own skill and talents to make the most of his life in the modern world while not only retaining, but actively promoting his heritage.