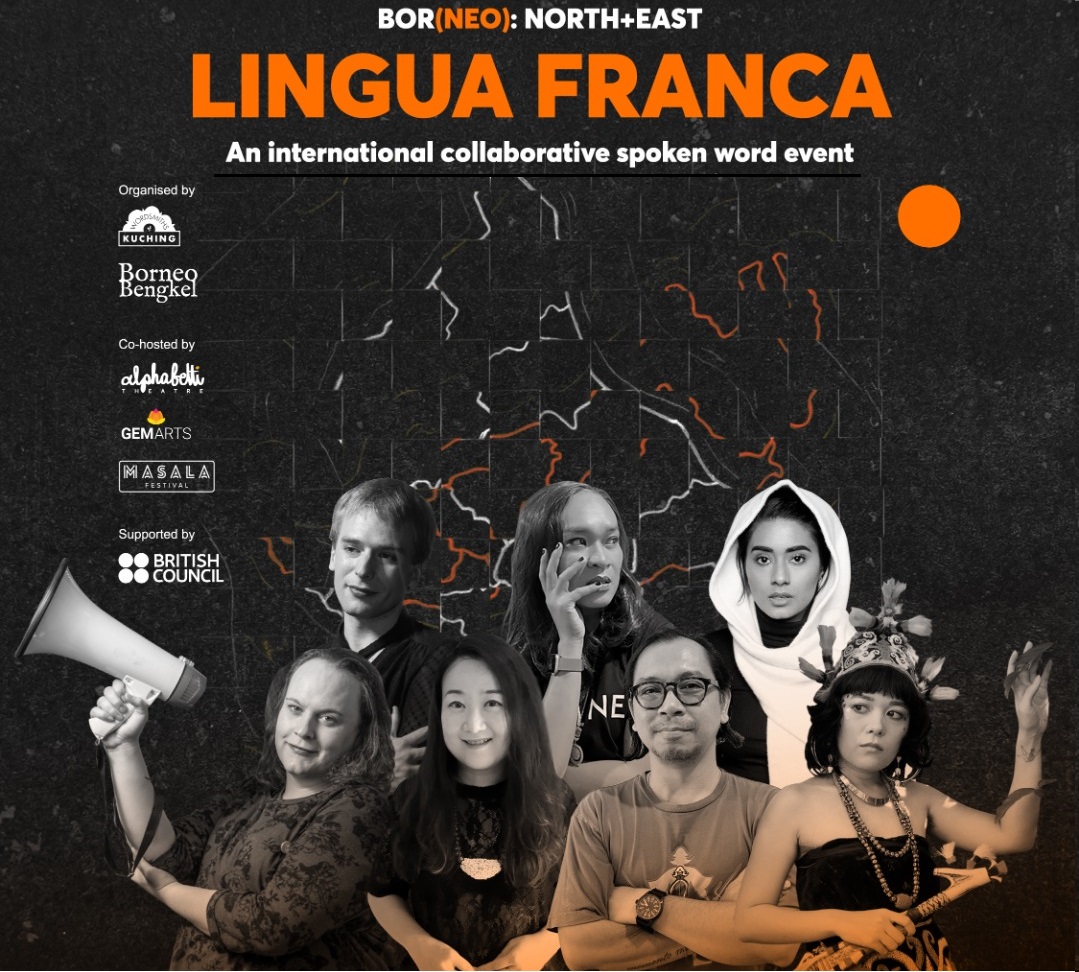 We’re snapping our fingers for our Malaysian poets at Lingua Franca, an online spoken word event part of the GEM Arts Masala Festival that took place mid July. For those unaware, “snapping” is the slam poetry equivalent of clapping. Usually, the audience snaps when they relate to something a poet recited. This year at the festival we could really relate to a lot of poems, especially those recited by the Wordsmiths of Kuching, a poetry collective in Malaysia.

Lingua Franca launched the eight-day festival on two stages which were live streamed on Facebook, one being HAUS Kuching Malaysia and the other in Alphabetti Theatre in Newscastle upon Tyne in England.

Lingua Franca was curated by Catriona Maddocks from Borneo Bengkel, who lived in Sarawak for 11 years before returning to the United Kingdom during the pandemic.

Maddocks says the event came from the realisation that the digital world has given us many opportunities to connect with people from distant places. “We want to try to encourage conversation between people who wouldn’t normally have the opportunity to speak to one another,” she explained, expressing her excitement for being able to bring creatives from England and Malaysia together to learn about each other’s lives and perspectives, using poetry as a medium to talk openly about race, gender, religion, sexuality and identity.

This year on stage, we had the privilege of seeing Wordsmiths of Kuching, a Malaysian poetry collective that consists of Angelina Bong, Bethany Balan, Neyna Radzuan and Maclean Patrick. From England, Tahmina Ali, AJ McKenna and Matt Miller were on stage.

The event was pay-as-you-wish. Fortunately for all, it is still available to view on the Lingua Franca Facebook event page. The 76-minute showcase is a treat for those Malaysians who are looking for a creative space of connection to understand the complexities of a Malaysian identity.

The poetry at Lingua Franca touches souls intimately. Both British and Malaysian poets performed, but here, we spotlight our nation’s artists.

Neyna Radzuan, a poet who tells an honest account as a transgender woman and was described as “a bold performer who is not afraid to address something that is considered taboo”, performed her piece A Story of a Mortal and a Malaikat. Neyna’s  heart-wrenching poem is written as a letter to her “angel”-like friend Lynn Wahab. At a time when Neyna was almost giving up on herself to her own illness, her friend tells her “Let’s be alive together. Let’s do all the things we’ve always wanted to do.” This verse haunts us when Neyna talks about unexpectedly losing her friend, who struggled with their own inner demons, during the pandemic.

Maclean Patrick, the Iban co-founder of Wordsmiths of Kuching, performed a piece titled in Iban which translates to “I do not know how to speak”. In a fiery performance, Maclean spoke about how Ibanese people were colonised, which contrasts to his experience of growing up in the UK during his formative years, where he walked the streets of Bedford eating fish and chips whilst learning a language far removed from his native mother-tongue. Maclean shared that he returned to Malaysia to replace the “intellectual colonisation” that had happened to him. “I do not know how to speak…racism…hatred…speak for a greedy government…for I learnt how to speak other languages…always knowing love.” Maclean related.

Bethany Balan, a biracial poet who is part Kayan, performed her piece called Gaps. She looked at the disconnect between her father tongue, mother tongue and national language, as well as her experience of being a minority in Malaysia. Dressed in a beautiful beaded Kayan headwear, Bethany shared: “My life is a series of gaps of conversation,” and went on to explain her struggles of not quite grasping each language from each of her ethnicities. The piece was textured and frankly quite stunning, creating a relatable experience for those who don’t quite fit the identities given to them.

Angelina Bong created her piece What is my own language? based on a question she often gets asked on her travels. She’s from Borneo, with ancestors from China.

“I’ve been milked and fed all my life on this soil of maggi mee, milo, nasi goreng, nasi lemak, ais kacang yet some still call us ‘Pendatang, Immigrant!’” Bong tells us, drawing on the complexities of her Malaysian identity.

“It is no wonder people with my eyes are flocking to be second class citizens elsewhere. Right now being spat on, chinese virus, asian hate. Even Uncle Roger gets punched in the face. Would we ever feel like we’ve truly feasted from the hands of this land like its first-born”.

Lingua Franca provided a stage for Malaysian poets to share their vulnerabilities and most intimate feelings. It was a brave act, and we were honoured to have the chance to listen.

Head over the Lingua Franca Facebook event page to listen to these talented poets.