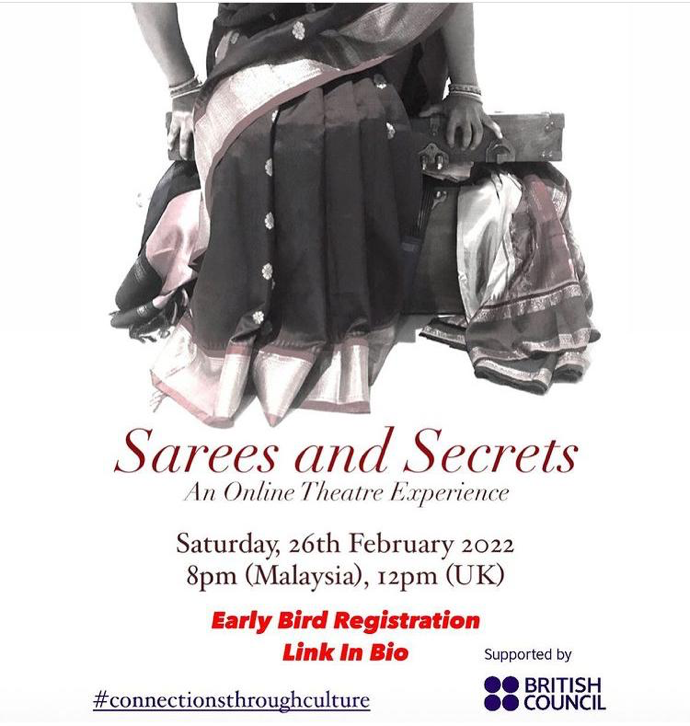 'Sarees and Secrets' explores these questions and more! In this online theatre performance, viewers were invited to explore our relationship with secrets - all while celebrating the saree!

What’s the secret behind a saree? What lies hidden between the endless pleats, what stories are embroidered in the silk? Sarees and Secrets explores these questions and more. It was quite an unique experience, which can be simply described as an online theatre performance. However, this show was much more than that. Sarees and Secrets explored our relationship with secrets, from the unique perspective of the Indian diaspora.

The show was performed over Zoom, and employed live, pre-recorded and interactive segments, fully utilising the online medium to give an all-encompassing experience. The hour-long, one-woman performance in February featured media professional Sumitra Selvaraj, founder of the Instagram account “Sarees and Stories”.

The first act opened with Sumitra in a room wearing a saree. With an innocent tone she talked about her first memory associated with a saree. She recounted instances from her childhood, where she would sneak into her mother’s room to try one on in secret. In this instance, the saree was the secret! She later implored the audience to share their earliest memories associated with the saree. For me, personally, the sight of sarees laid out on the floor, with a woman folding them, is all too familiar. Although I didn’t share any memories in the chat, other viewers did, and their stories ranged from memories of their grandmothers, to getting their first saree for a festive occasion like Deepavali.

The next segment was a pre-recorded video of Sumitra in another room, folding sarees on the floor – almost as if my saree memory had been read and turned into a video. Unlike the previous segment, however, this one took on a hidden meaning. She began explaining another secret behind a saree, which was how to preserve it. “The secret is to keep wearing it,” she explained, adding that the fabric is almost “alive” and needs to breathe for it to retain its quality. The longer you keep it locked up, the faster it deteriorates. Here, the saree is an allegory for one’s true identity. The best way to preserve it is to wear it proudly for all to see. This was when things took a darker turn, as Sumitra explained what identity meant to her. She spoke about how she views depression as her identity, like a saree, it has been with her for as long as she remembers and just like a saree, she oddly feels safe in it. It is all she has known, and she sees it as central to who she is deep down inside she feels afraid of losing it one day. Thus, she reasoned that it is best to wear it with pride. In this segment, Sumitra challenged the popular, overly positive discourse surrounding mental health, giving a deeper and more nuanced view of the challenges a depressed person may face.

In the third segment, Sumitra opened up about her grandmother, or Aatha’s pink Kanchipuram saree, with honeycomb motifs. Later in this segment, viewers were asked to participate in a poll to share their relationship with secrets. Questions included things like “who are you keeping your secrets from?” and “what are your secrets relating to?”. In the end the results were revealed. What intrigued me was when we were asked “Do you feel alone with your secret?” and “Would someone understand?”, the responses were evenly split. It was interesting to see that we really don’t know what could happen if we exposed our secrets, and it is that lack of certainty that necessitates their existence of secrets. It was also heartwarming to see that we don’t have to be alone in our secrets. Even those who said they felt alone, could take solace in knowing others feel the same.

In the final segment, Sumitra tried to bring out the answer to the question , “why do we have secrets?” Thinking about it, it takes a lot of work to keep a secret, much like wearing or maintaining a saree. Unlike a saree, however, secrets tend to eat away at us. Going about our waking hours guarding, deep in our psyche, the knowledge of something that cannot be shared, can be very taxing.

Sumitra asked the audience whether it was shame, regret, or fear of rejection that held us from revealing our secrets. She went on to argue that if a secret could eat us alive, we should not fear rejection. Ultimately, family or friends who really care will not reject us for our secrets.

Indian society can be very self conscious. We are constantly worrying about what others might think or say, all while being too aware of others’ lives. Living a life contrary to the standards set by society will invite judgement from those closest to us, so it is more appealing to just keep things a secret.

Sumitra urged us to break free from this, and to wear our secrets proudly like she wears her saree. The highlight of the show for me was when an anonymous chat box was opened and participants were encouraged to share their biggest secret. It must have been overwhelming for many participants, but judging by the nature of the confessions made, it was equally liberating. Topics ranged from sexuality, abuse, love, life choices, and family. For me, seeing the plethora of confessions reminded me of the sheer diversity of human life, and all its complexities. Everyone bears in them the burden of a secret, with no way for others to know just how dark, bitter, or bizarre they may be.

When given the opportunity to share a secret anonymously, most didn’t hesitate. This goes to show that people aren’t afraid of the secret per se, but the thought of people associating that secret with them specifically. It is that message that Sarees and Secrets was built on. With that, I left the show feeling a little wiser, and a little more human, with the reminder that everyone has a secret and if we would all be a little less judgemental, we could make the world a better and safer place.