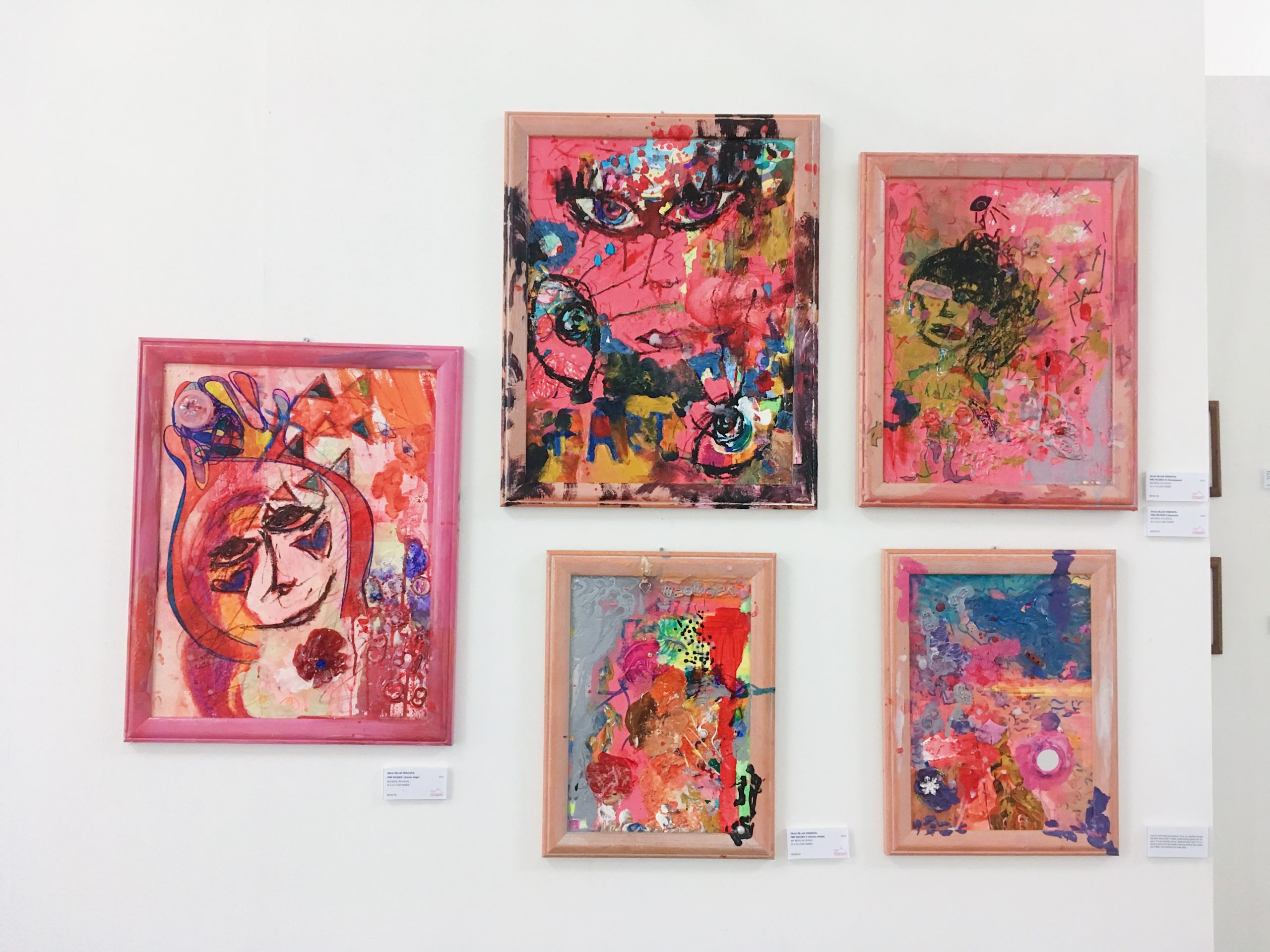 “P!NK, A Group Art Exhibition” at Rumah Tangsi featured the work of Anjali Nijjar Venugopal (ANJU) who takes the viewer on an introspective journey through her collection entitled “Pink Violence”. Grappling with what it means to be a non-binary person who loves the colour pink, she urges viewers to essentially rethink and reimagine the colour and its associations – femininity, softness, docility. So what if pink was queer? What if pink was rash and violent? What if pink didn’t care? She aimed to show these perplexities through her art with mixed media as her choice of medium.

The common theme in this exhibition was the depiction of mental health struggles and it came across rather obviously, especially in the titles of the pieces. Her style is distinct and abstract – even messy at times – and that truly helps encapsulate the visual of a chaotic mind and volatile emotions.

Two sets of leering eyes stare at me. In this piece, titled “PINK VIOLENCE I (Anxious anger.)”, the sense of anxiety and mental chaos, in the form of colours abstractly painted over the canvas, with random spots on the frame – is blindingly glaring. Instantly, I can visualise the calamity she tries to depict, adding on to her use of  the word “anger” in the title. Red is more often used to express anger but here, she uses pink. To me it seems less like a depiction of an explosive type of anger, and rather a more subdued frustration that feels like an never-ending buzz.

“PINK VIOLENCE II (Obsessive.)” is visually the most cohesive piece in this collection, mainly because of her choice of sunset hues. It’s a deranged face with purple hearts on its cheeks and abstract shapes over its head. She also uses buttons, zippers and paperclips to further punctuate the work. Below the face there is a big red blob of paint, which has little pins stuck in it. I can only assume that it represents the human heart when filled with obsession – it looks shapeless, enlarged and painful. The purple hearts strongly hint at how obsession can become all-consuming when humans become fixated on the idea of loving someone else. Often blinding, nonsensical and demented – quite like this face – we are forced to rethink our own familiarity with obsession.

My favourite piece is “PINK VIOLENCE III (Dysphoria.)”. Dysphoria is a feeling of disconnect to one’s gender and I think she managed to encapsulate that very well. It features a disproportionately bodied person with a pink plaster over their eye. They have lipstick on, breasts, and black scribbles next to their face. The background is pink with symbols haphazardly arranged all over. It stood out to me because it looked absolutely chaotic and unintelligible, much like the feeling of dysphoria – chaotic, misunderstood and hard to imagine unless you personally have it. The disproportionate body definitely shows a sense of disconnect. In fact, looking at the piece in whole and its framing, it looks like a person looking at their reflection in the mirror and feeling an absolute whirlwind of emotions because of the disconnect to oneself.

The stand-out detail of this piece for me had to be the tear, which Anjali holds together with a safety pin. Whether intentionally or not, the pink tear resembles a vagina with the pin piercing its clitoris, perhaps to depict the pain she feels about being viewed as a woman by society’s archaic gender norms, despite being non-binary.

“PINK VIOLENCE IV (Discomposure.)” and “PINK VIOLENCE V (Anxious solitude.)” are her only two pieces that lack the elements of a face or human body.  They both feature abstract painting styles on canvas with the addition of little beads, bra sliders and rings to represent her attachment to femininity. Both are very pleasing to the eye, despite the random strokes and concentrations of paint. Anjali has an eye for colour, and it works in her favour because her art looks tasteful even though it depicts very heavy and challenging emotions.

I think that it is very important that we give queer and trans artists a platform to share their stories and struggles because their experiences are unique and personal. Anjali’s depiction of dysphoria and mental health is so important because there is never enough talk or representation of those who are atypical – in every sense of the word – especially in this part of the world. She gives us valuable and vulnerable insight into the sometimes scary bits of her mind with the use of the word “violence” in her titles possibly hinting at the repercussions queer people face for being themselves. Through this, we get the opportunity to take a deeper look into our own minds and reflect on the norms we have been fed – and to question them.