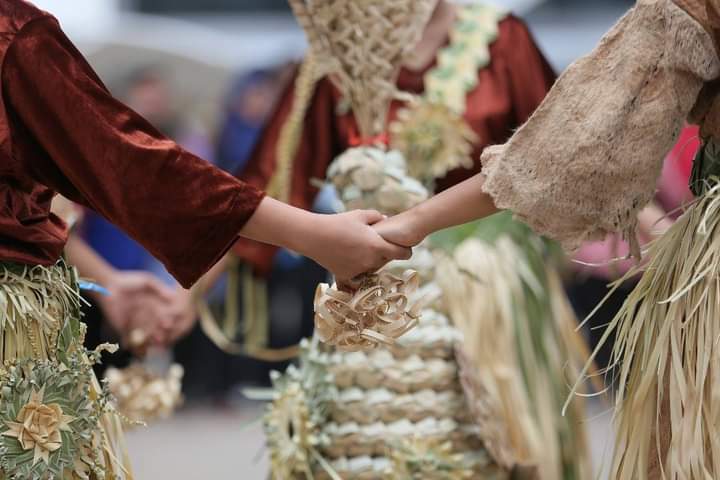 The upcoming Panggung Rakyat performance features the wedding traditions of the Mah Meri Community, painstakingly put together by the people themselves, under the guidance of one woman who sees them for who they are.

CENDANA’s Panggung Rakyat series has been a lifesaver amidst a time of cultural silence. For the last year and a half many cultural practitioners all over the country had been forced to put a halt on their activities; and with their livelihoods still on the line, one wonders if these individuals will ever find an outlet for their craft once more.

“My relationship with the community started out as employer-employee” said Norlia. “But after 10 years of working with them, we became like a family.” Recently, for example, she was sought out to help obtain vaccinations for two teenagers in the community. “When they need help, they will come to me, and I will always try my best to assist them in any way.”

“In 2017, we established the Mah Meri Cultural Club, with members from the community. The club’s primary function is to educate the community on the work that I do, and to involve them in the planning and execution of various programmes that the club organises.”

When the club was first founded, one of the major issues it faced was the lack of interest from the younger generation to continue the artistic and cultural practices of their community. “At the time, our main focus was to help them understand, learn and practice the traditions that have been passed down to them,” she added. “We also organised various programmes to help elevate the youth’s knowledge in craftmanship. The Mah Meri people are known for their wood carvings, weaving, song and dance, all taught by members of the older generation. These programmes provide training platforms for the young to learn from their elders.”

Norlia also mentions how one of the club’s goals is documentation. “There has never been a formal documentation for the community’s traditional art forms. We are working towards archiving their poems, music, lyrics, as well as the intricate processes that goes on behind the crafts they produce. That is our mission.”

Norlia is not of Mah Meri blood herself. Hailing from Johor, she has worked with indigenous communities for almost 30 years. She began her work with the Temian and Temuan peoples. With the same goals, Norlia’s focus has always been on the youth and the women of these communities.

“I have always believed that the development of a society is dependent on its women. A woman who has no income will find it difficult to manage the family. The men will provide basic needs, but it is the women who will ensure that their children have clothes, possess good moral values and a healthy emotional upbringing. Thus, I believe, a harmonious family unit is primarily the responsibility of the women.”

When she first began working with indigenous communities all those years ago, Norlia admitted to feeling rather disinclined to offer her opinions on their work. However, slowly, she began offering advice regarding their products, and was then able to generate income for the people through the sales of their handicrafts.

“We also organise educational programmes for students from schools and universities. When they come to visit the village, they become interested in the Mah Meri’s work, and often leave with souvenirs of their own,” she said. Programmes like these generate public interest to the Mah Meri, and Norlia finds herself making orders for handicrafts, in order to sell to the public, with the proceeds going back to the people.

Norlia and the Mah Meri people came to work with CENDANA through a chance, almost coincidental, encounter. “We have always wanted to collaborate with government agencies; however, the process is usually very difficult. Then I came across an advertisement from CENDANA stating that they were coordinating ‘Adiguru’ programmes. I know many individuals from Orang Asli communities who deserve to be acknowledged as an Adiguru, yet they do not have the recognition from any official body. That’s when I decided, ‘Why not? I should try’.”

When asked if the Mah Meri people had stories they could showcase on CENDANA’s platform, Norlia immediately responded with confidence and reassurance. When asked for suggestions, Norlia recommended the story of “Moyang Lanjut”. However, reaching that conclusion was difficult. She had to discuss with the villagers, as well as consult the elders. “CENDANA wanted the involvement of the older generation, those who were recognised as a ‘guru’.”

Pleased at the insistence of proper representation, Norlia and the Mah Meri people began assimilating the experiences of the old with the nowness of the young.

“We did not want the showcase to be just dancing, but to have a story, something that came from the people itself,” Norlia explained, adding that she had requested that the actors featured in the performance consist of individuals from the people itself, even if they lacked acting experience. “This idea was supported, and CENDANA also provided a platform to sell products made by the people”.

This platform is important. During the Movement Control Order, many people were out of work and income for two years. Getting the people back to work was a priority, and providing them with the right tools, materials, and resources to resume their craft for business purposes was a step in the right direction.

“However, once they began work, who would they sell their products to? This is where CENDANA stepped in. They assured us that they have a platform, and thus made many orders for handicrafts,” said Norlia, stating that these are the kinds of initiatives government agencies to implement to really help the community.

The upcoming Panggung Rakyat performances tells the story of a traditional Mah Meri wedding ceremony. The main character is Moyang Lanjut, a figure that originated from wood carvings.

“This story is special. It involves love, loyalty, and unrest within society. It is a tale of forbidden love, yet Moyang Lanjut is stubborn. She still wishes to marry the man that she desires. Her stubbornness however leads to tragedy; Moyang Lanjut loses her life. It is a belief amongst the people that once somebody passes away, they transform into other forms, such as spirits.

“The Mah Meri marital traditions are complex and extensive. Many rituals and practices have to be completed before a proper marriage takes place. A unique aspect of these traditions is that the bride and groom have a say who they wish to marry. An example would be through a game; a man that wishes to marry a woman of must undergo a game, however, if he wishes to reject the bride, he will pretend not to be good at the game. The families will then consider the man as unfit to marry,” she explains. “As for the women, they engage in a hide-and-seek of sorts. If the woman chooses to not be married, she will hide her hands from view, whilst the other women will display their hands. The man will then circle the women, looking for a hand to pick out. A woman who refuses to marry will not present her hand, and thus the man is unable to find his bride.”

These aspects show that the Orang Asli have traditions that make them a civilised people.

“This is why I decided to focus on a wedding for this Panggung performance,” said Norlia. The performance even highlights penalties. “In the story, the main character chooses not to marry, and thus she hides herself, cancelling the wedding. This is a big issue in the community, due to the complexity of the ritual itself. The penalty is usually angled towards humiliation, in which the person in question will wear a coconut necklace, which makes noise. This penalty is meant to serve as a reminder to others in the community regarding the sacredness of the rituals, and that they are not to be taken for granted”.

Moyang Lanjut is folk character of the Mah Meri people. She is often portrayed with long hair, and breasts that hang low. These characteristics are meant to act as a guide for her would-be husband, her breasts as a way to her soul, and her breastmilk as a symbol of nourishment. Her face is usually that of an elderly woman, showcasing her long, patient, wait.

Norlia reminded that representation is important. The performance is sacred, ritualistic, even. She firmly believes that there are some instances during which non-community people can be involved, but there are times when it is vital for members of the community themselves to be showcased and celebrated, even if it means that the rehearsal process will take a lot longer.

“I want people to watch this performance and rethink the stigmas they have towards the Orang Asli. There is widespread belief that the Orang Asli are savages, with no customs and decorum. That is simply not true. We hope to change that.”

In conjunction with Art In The City 2021 and in partnership with DBKL, the seventh episode of Panggung Rakyat will feature Mah Meri Traditions and Culture, in collaboration with the Mah Meri Cultural Village. Tune in for the premiere this Saturday, Nov 27 at 8.30pm on CENDANA’s Facebook. Subsequently you can watch the episode, along with all previous shows, here at BASKL.