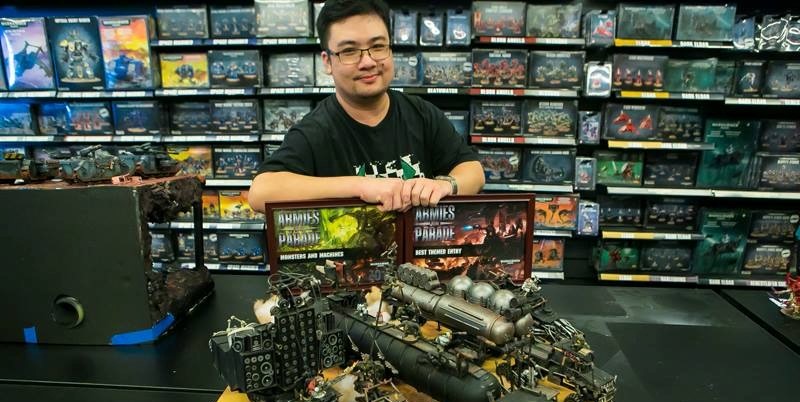 Carl Lum, a former paint technician at the famous Weta Workshop and freelance miniature and collectible painter, speaks about his career.

Carl Lum has a career that many a hobbyist or pop culture geek would be envious of. Not only is he a freelance miniature painter, he also worked for the world-famous Weta Workshop painting props and costumes for big-name Hollywood movies like the upcoming Thor: Love and Thunder.

From a young age, Lum loved painting. “Back in Form 3, I remember one of my friends came back from the UK, and gave me a present. It was this box of white metal miniatures. He said: ‘You need to paint them yourself, build them yourself.’ So I thought, ‘Wow, this is a really interesting hobby because it requires a lot of effort to get something done.’ Not everyone would be interested of course, but for me I really liked it. I started researching how to build something like that.”

At the time, Lum, like most other teenagers, was only exposed to arts and crafts at school. It was only through his own research that he found out kits like the present he had received required superglue, plastic cement and other professional materials. And that made him even more excited to learn more about the tabletop wargaming hobby.

“I used watercolours to paint,” Lum chuckles. “You’re not supposed to do that, you’re supposed to use actual model acrylics. And as I understood more, I found shops that sold these kinds of products, and I started to get to know the owners and how they brought the models to Malaysia. I went deep into the rabbit hole. Fast-forward to now, I’m very addicted to this hobby. I paint every day.”

When Lum ventured into freelance miniature painting, it was difficult at first. Being a niche market, not many people would commission a professional to paint their miniatures. “But when I hung out in hobby stores, the others would always see me painting something. They would say, ‘Oh Carl, you can paint, huh? Maybe if you paint my stuff, I can give you some money.’ So I thought maybe I could make something out of it. So I gave it a try and I enjoyed it. I learned how to paint fast, and with quality.”

Things changed for Lum in 2019 when his friend told him about a job opening at the renowned Weta Workshop, a New Zealand-based special effects and prop company, responsible for providing effects for some of the world’s most successful movies. “They were hiring general crew at the time. I really liked Weta Workshop because of the work they did on The Lord of the Rings, and the practical effects they did for many other films,” Lum says. Naturally, getting into a company like Weta is very difficult. “These are the most sought-after jobs. It’s the pinnacle,” he says.

Fortunately for Lum, he tried his luck, sent in an application, and managed to get an interview, which led to him being hired to help with painting the Mini Epics line of collectibles for Weta. He was overjoyed. “Me? Just a random guy from Malaysia?”

He moved to Miramar, New Zealand, an area where a lot of film production is based, with many studios, sound stages, pre- and post-production facilities present. Weta Workshop is most famous for its work on props, such as the weapons and armour for Mulan, or the scale miniatures of the skyscrapers of Blade Runner 2049. But in the first few months, Lum founnd himself mainly working on painting 3-inch to 6-inch collectibles. After nearly a year of that, as Weta got more film work, he was given the opportunity to work on movies.

Lum says, “It’s very different from painting collectibles. You’re painting a large surface, like a suit of armour for an actor. It has to look realistic for the camera. Not only that, I had to paint it real fast, because the turnover is very fast. Unlike with collectibles, you don’t have a lot of time to scrutinise the work. For example, an actor may need six suits of armour. One may be hero armour, where the camera will zoom in real close to see the fine details; another might be stunt armour which would be quite rough but you only see it from the back or when the actor is rolling around on the ground, so you have to take all that into account.”

During his time at Weta from 2019 to 2021, Lum worked on various movies. As some have not been announced to the public yet, he is only allowed to talk about a few movies. “I worked on Thor: Love and Thunder,” Lum says. “It’s a group effort, I helped with painting and masking out Thor’s suit. It’s a very intricate design, there are a lot of patterns there that you have to paint separately. The whole suit is metallic chrome, red, blue, and yellow, so certain parts have to be masked for certain colours to be painted on first and vice versa.

“You need the entire workshop to work on it. First, there’s a design phase where it has to be approved. Then the suit has to be made of a certain material, it has to be moulded, then cleaned up. Then it has to be painted, and then costuming may add cloth to it, then it might go back to paint to touch up. The paint department always gets the glory or the flak from the client, depending on how good you’ve done since it’s usually the last stage.

“As for other films that I worked on, I’d say everyone had a hand in the latest Avatar movie, Avatar: The Way of Water. I did paint some of their props, but a lot of it is still under a Non-Disclosure Agreement because not everything has been shown to the public yet. I did some of the armour, like the leather straps. I also worked on one of the props for the new Obi-Wan Kenobi TV series, one of the starships. That’s as much as I can reveal.”

Lum reminisces fondly on the happy times at Weta. “Every day you’d walk into the office and you see all sorts of wacky stuff that’s being done. Things that cost millions of dollars that you’re holding and painting, so some of us were pretty terrified. I tried not to think about it so I could work comfortably. A lot of things happen there. You could be painting 100 swords, or 50 suits of armour, or a sports car, or you’re applying prosthetics to someone’s face to make them look like they’re scarred. There was this blacksmith area, where two guys worked, and their entire role is to make swords, actual medieval swords. It’s fun to talk to people like that because they’re really into their craft. That’s what I love about Weta, a lot of unique and crazy things happening.”

After his contract with Weta ended, Lum resumed his trade of freelance miniature painting in Malaysia. He still keeps his eyes open for any opportunities similar to his stint at Weta as a paint technician. “In the film industry, when there’s work, they’ll start calling in more and more artists for the project. And there’s a downtime period after the film is done and everyone rests until the next project. I’d like to work again for Weta, but it’s up to them if they can slot me into their timeline or not.”

For more on Lum you can check out his pages on Facebook and Linkedin.