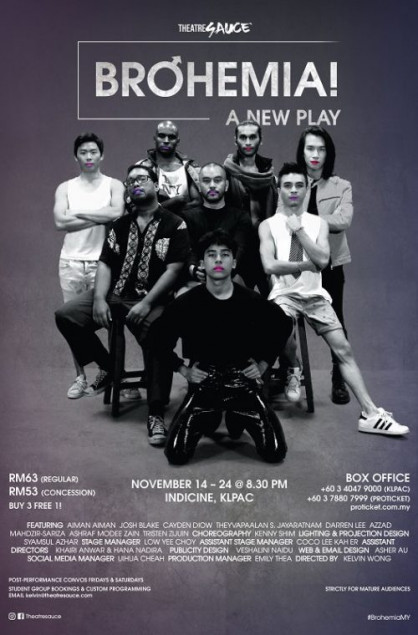 By NATASHA P. for Lensa Seni

BROHEMIA! is about a fictional utopia of men whose ideals celebrate very stereotypical traits of masculinity. As the city celebrates its 7th Annual City Parade, the Mayor launches Vitamin M, a controversial drug that claims to permanently enhance the lives of all Brohemians. While most celebrate this move, a sceptical few embark on a journey of revolt to change the course of BROHEMIA!, for good.

The play, which ran a total of 120 minutes with an intermission, was set in a utopian city which is supposed to be a haven for minorities. The real minorities however, are not as you’d expect. Racial minorities do exist, but the marginalisation, in its essence, was against effeminate men and trans women. And the play centres around that, following a group of friends who, in the eyes of Brohemian society, are considered too effeminate to be on the right side of the law.

The play brought to light certain prejudices plaguing the LBGTQ community that outsiders wouldn’t even know existed; unwritten rules created by the so-called “ruling class” of the community who are essentially very masculine cis* men.

The mayor of Brohemia introduces a pill called Vitamin M to Brohemians to rid them of their feminine traits – conversion therapy in a pill, if you will.

For a queer-centric production, the play’s binary approach to gender came across as self-contradicting. It seemed to me like the only portrayals of masculine and feminine in the entire show were that of very “typical” traits, such as “powerful, angry, macho” as representations of masculinity and “empathetic, kind, emotional” as representations of the feminine. The play’s portrayal of its effeminate characters was hyper-sexualised and degrading. There were two scenes in which two separate characters recount getting violated. The first was a rape scene in which the actors’ bodily movements were exaggerated – probably to create more impactl – but that made it uncomfortable to watch. In the other, Aiman Aiman’s character was beaten up for being flamboyant and seemingly transgender. I suppose the scenes succeeded in being evocative, but the graphic nature made me want to leave the room.

The play was meant to be satirical, but certain moments were so outrageous it was hard to take the production seriously. One example was at the end, when the characters took matters into their own hands and vowed to avenge the life of their sacrificed friend, and they attacked the mayor and castrated him. His testicles were held in the air and squeezed, which I assumed was for dramatic effect. The scene was about the reclamation of power, sexual liberation and punishment for rape – all heavy issues – but it was done in a comical manner that I felt reduced the significance. Was the comedy necessary for this scene? If so, who was it for?

Another issue that rubbed me the wrong way was the tone-deaf portrayal of race. It pitted an abusive, masculine Chinese man against an effeminate Malay man. It is a known fact within the gay community that Chinese men dominate the dating scene in Malaysia, as they are the least likely to fall victim to the weird discriminatory labelling in Grindr culture, where toxic masculinity thrives. The Chinese character beat the Malay one up and later committed suicide. At his funeral, everyone mourned him,including the character he’d abused. The bully was glorified after his death, whereas the trauma of the Malay character was forgotten and deemed less important. This was a poignant moment for me, as it highlighted the reductive way abuse and mistreatment is seen within the gay male community.

The tone-deafness of the play further extended into the use of capital punishment for being effeminate. It was ridiculous, redundant and inconsiderate on the part of the creators to completely disregard the very real possibility of resurfaced trauma among  the audience. A queer play is bound to have a queer audience and queer people are being murdered and punished around the world, including Malaysia. It struck me as neglectful on the director’s part. In conclusion, I felt like I had to dumb myself down to actually enjoy the play. For a play that ended with a sense of justice restored, it seemed to me like it didn’t do many of its characters justice at all.

*cis gendered: a person whose gender identity corresponds with that assigned at birth