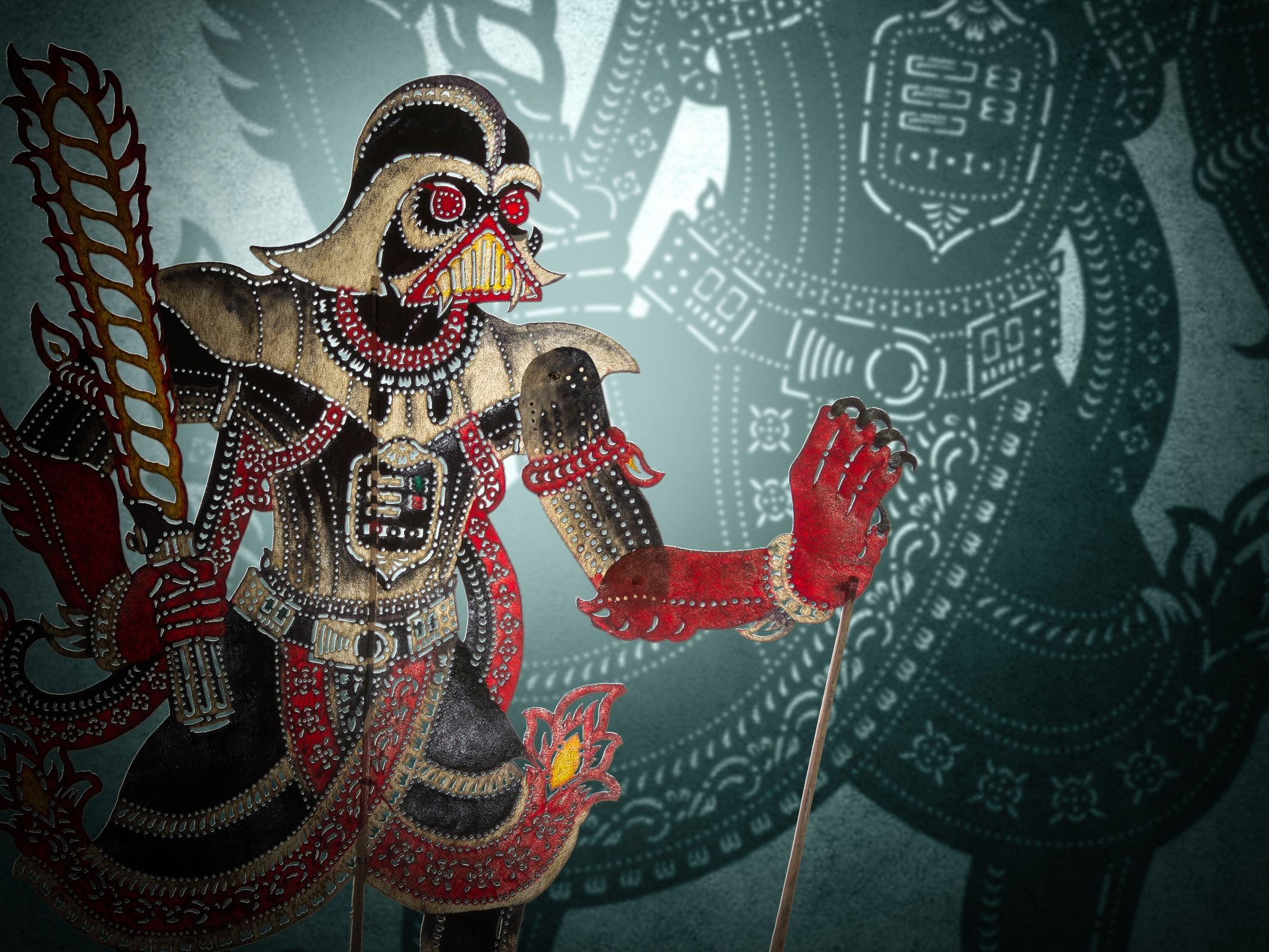 Wayang Kulit is an ancient tradition. Centuries-old, predating the arrival of Islam in the Nusantara region, Wayang Kulit is theorised to have originated in India. Spreading throughout Asia, just about every Asian country has its own variant of the art form. Tintoy Chuo, co-founder and character designer at Fusion Wayang Kulit, worries about the decline of the art form in modern Malaysia. That was the reason Fusion Wayang Kulit was founded, to marry the ancient tradition with modern pop culture in hopes of keeping the practice alive, even if encased in a shiny new shell. “In order to preserve a fading art that not too many people know about, I needed to get something that is very popular,” Chuo says. “Even my mom knows Star Wars.” That was Chuo’s key strategy to reach a wider audience.

Walking into Fusion Wayang Kulit’s gallery at GMBB mall in Bukit Bintang, Kuala Lumpur, one is bound to be enraptured by the beautiful puppets hanging on the walls. Modern icons like Batman and Darth Vader hang beside traditional puppets like Wak Long and Pak Dogol. The fusion-style puppets are rendered in Chuo’s unique, highly stylised art style.

“When designing, I always refer to the traditional puppets or to get approval from my master puppeteer, Pak Dain,” Chuo says. Making sure the puppet designs stay faithful to tradition and the principles of Wayang Kulit while still looking innovative and modern is of great importance to him.

Chuo is very purposeful about how he incorporates the principles of Wayang Kulit in his new designs. For example, Malaysian Wayang Kulit puppets often hold objects representing their role or occupation in their back hand, which is held closest to their bodies. The princess puppet would be seen holding a flower, allowing for identification of her role in the stories. Chuo ensures his pop culture characters follow this pattern as well, such as the Batarang clutched in Batman’s hand, or the lightsabers and guns held by the Star Wars characters. The main characters in the traditional Wayang Kulit performances are usually depicted standing on dragons to represent their status. Likewise, the Star Wars characters stand proudly atop starships and other vehicles. Batman, not to be left out, is perched atop a gargoyle.

This writer had the opportunity to participate in Fusion Wayang Kulit’s workshop, in which participants were able to carve out and colour the Wayang Kulit puppet of their chosen design. The cost of the workshop depends on the complexity of the puppet you choose to create, with the cheapest being the traditional Wak Long and Pak Dogol puppets, costing RM90 per puppet. The pop-culture-inspired puppets are more expensive due to the complexity of Chuo’s designs in translating the iconic designs into the intricate Wayang Kulit aesthetic, costing RM130 to RM180 per puppet.

For the workshop, this writer chose the Batman puppet design, which while extremely beautiful, may not have been the most practical choice for a complete novice, as the duration needed to complete the puppet was about five hours, far longer than the simpler puppets which can be completed in half the time. The template for the puppet was provided by Fusion Wayang Kulit, the outline drawn out on a piece of paper that was pasted onto a piece of rawhide. Then, the participant would use a mallet or hammer and a special tool, called tatah, to punch designated holes through the rawhide, which have been clearly marked by the template provided. This was the most time-consuming part of the process, requiring the patience to stay focused for a few hours.

With that completed, the next step was to cut out the puppet according to the outline of the template provided using scissors. While punching out the holes in the previous step was time-consuming, this step was probably the most challenging, as some skill was required to exert enough force to cut through the rawhide while also carefully adhering to the precise outlines of the puppet.

Once the puppet had been cut out, the final step was to colour it in. Traditionally, artisans use layers of paints derived from plants. However, for the layman participant, marker pens are able to achieve a pretty enough effect. References for the colour schemes of our puppets were once again provided by Fusion Wayang Kulit, but we were free to use our own creative judgement to give our puppets personalised colour schemes.

All in all, the workshop is highly recommended for anyone interested in spending an afternoon learning about this beautiful art form, or anyone who wants to own a puppet of your favourite Star Wars or comic book character, given a Malaysian twist.

Chuo laments the disinterest the general Malaysian public shows in our cultural heritage. “Each country has its own culture,” Chuo says. “If a country’s culture becomes less and less prominent, it will lose its identity. It will just be skyscrapers, iPhones, Nike. Wayang Kulit is part of our culture. It is something representative of our country. We should do something to keep it alive. This art form is fading, people think of it as a sunset. I hope to pull it back into the afternoon,” he adds with a smile. His hope that Malaysians will one day care again deeply about their culture and roots is indeed infectious.

Fusion Wayang Kulit is open from 11am to 6pm daily at GMBB mall. For the workshop schedule, head on over to its Facebook and Instagram pages, and don’t miss the next workshop on Sunday, July 24!