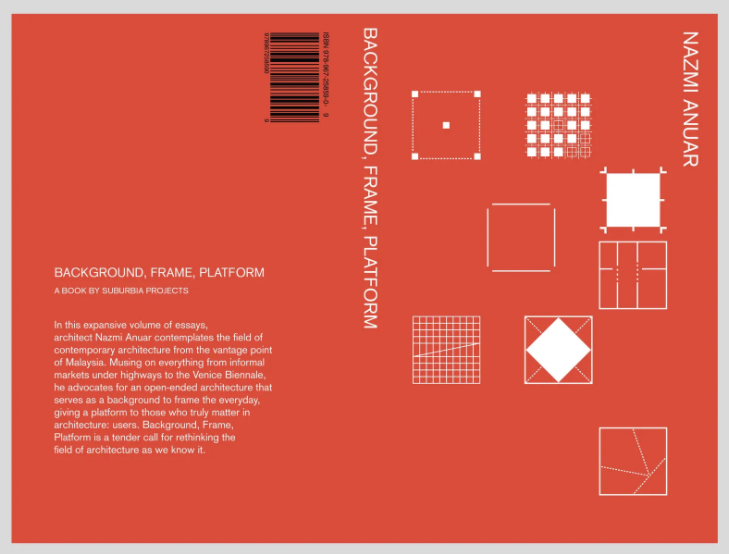 “Background, Frame, Platform” are familiar terms percolating in the field of design. Three generic words. Abstract enough to be applicable to many contexts, but specific enough to construct a book. The author, Nazmi Anuar, alongside the publishers Suburbia Project present the ideas in the form of a book and an accompanying exhibition.

Background, Frame, Platform guides readers expertly through the fussiness of our incongruous Malaysian cities. Using a short, often expertly titled short essay format, each piece is a nutritious nugget for the architecturally inclined. These essays are personal, often littered with referential questions. Nazmi writes in a comfortable voice, pulling out typical Malaysian phenomena through an architectural lens. The urban environment we are faced with every day is unexpectedly recentered in the small volume.

Nazmi Anuar navigates elegantly through the everyday. When he isn’t writing, he is either collecting images under the hashtag #normalandboringstuff, or chairing a design studio unit about ‘Tropical High-rise Dwelling’ at the School of Architecture, Building and Design (SABD) at Taylors University, or making post-rock music (with some friends he is part of a post-rock band called Tentang). Nazmi is culturally inclined.  He also runs an aptly named practice, Normal Architecture, which is featured extensively in the postscript of the book.

The book holds a set of tender essays, criss-crossing between unexpected flooding (albeit somewhat an untimely reminder) at Nazmi’s first built project (he built his parents house no less!), an assemblage of aunties and uncles underneath flyovers, bridges occupying residual spaces in the car orientated poly-centric city of Kuala Lumpur. Nazmi reminds us to embrace the disarray of urban phenomena in the city.

The book is delicately designed, written and edited. Published by Suburbia Projects, edited by Lim Sheau Yun and designed by Amanda Gayle, a lot of care and consideration has been encapsulated in a tiny maroon book. The text is supported by photographs printed in black and white and sprinkled with delicate references. My eyes darted between the footnotes and Nazmi’s words often, with a laptop nearby hurriedly looking up the references. Reading the clear articulated ideas facilitated by the careful design process, the book pinpoints many holes in the built environment of Malaysia.

The book begins with developing five RUKUN (reference to rukun negara, the idea of creating a set of commandments) written in capital letters embedded in the phrase “THE 5 RUKUN OF NORMAL ARCHITECTURE”.  The first rukun immediately directs the reader to “Question(ing) (the) Norms”. Then comes a series of small paragraphs detailing the other four rukun before returning to the Malaysian context.

The most compelling section is titled “Some (Fragmented) notes on Teaching and Learning Architecture” which begins with an anecdote on “A Teacher is a Student”. Education is a process of collaborative learning and to maintain a constant curiosity for our collective and ever-changing built environment. Another hilarious and witty chapter is “One doesn’t Invent a New Architecture Every Monday Morning,” dispelling any land-shifting and world-altering convictions of any architecture student. Nazmi instead offers to acknowledge what has happened in the past by collecting precedents, slowly harnessing a collection of selected ideas from the generous field of arts and culture.

Launched alongside the book, an exhibition was held at Suburbia Projects – a single storey terrace house in the suburbs of Section 17, Petaling Jaya. Held from October 23 to Nov 7 last year, the two week show was segmented into three sections of the book title.

In Background, the curators exhibited a careful selection of books, sketchbooks, rough drafts and photocopied pages on a low elongated white table. The table was held up by cement bricks, the very foundation of mass housing. Nazmi’s sketchbooks of the past eight years, binders of scrawled notes and a bound copy of his master’s thesis, “The Big Box or A New Generic” were displayed for all to leaf through. Alongside personal fragments of ideas, several published books decorate …

Frame, marked in red. The display frames the corner of the small exhibition space, demarcating the extents of the exhibition. Displayed here were references which informed Nazmi’s teaching for the graduate students programme. Collated in the centre was a series of terminologies to describe the references identified for

Platform, which simply displayed piles of the book itself and postcards of the same book cover. The graphic designer of the book, Amanda Gayle, had interpreted the book chapters into square icons.

The collection of thoughts formatted in between an exhibition and a book invites multiple entry points for all interested in thinking about the city, about Malaysia and our shared tropical climate. There is a personable tone to Nazmi’s writing, questions and photography. You can leaf through any page and take away a rich assortment from an architectural wish list for a new Malaysia, declarations on affordable housing and living or finding “FREESPACE”. The two formats revealed rich, largely untapped musings on the city, the people and wishes for our Malaysia.

The exhibition has since concluded (do have a look at Suburbia Project’s Instagram for photos), however the book, Background, Frame, Platform can be purchased on Suburbia Projects.