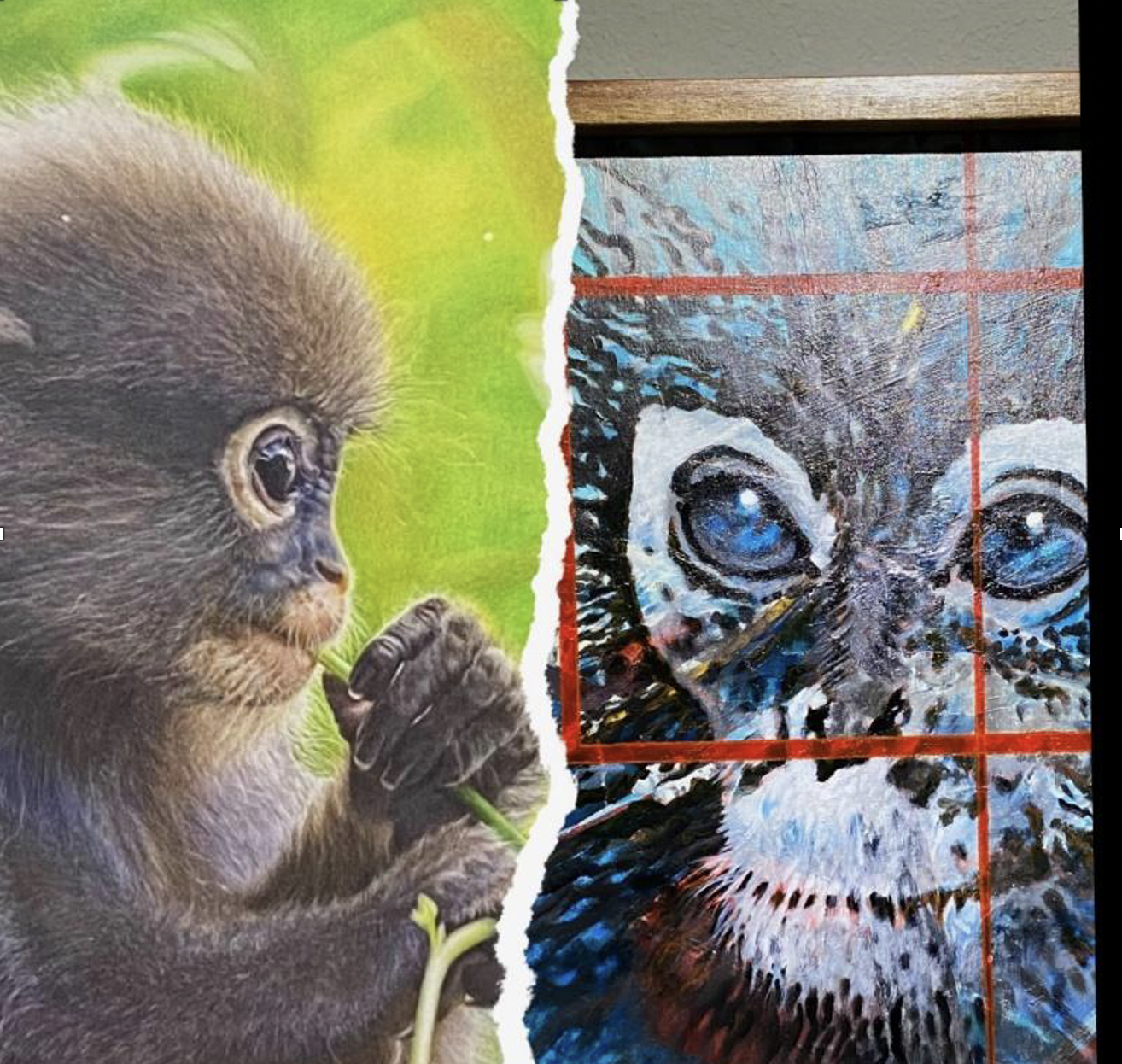 60 artists. 60 artworks. One Mission. LangUR: Building Bridge Between Our Worlds seeks to send us an urgent message: Time is running out for the dusky leaf monkeys.

Story and photos by KOAY CHOON SEAN for Lensa Seni

“Heartless” Perhilitan shoots dead a family of endangered monkeys. Like it or not, negative news headlines rake in reads, views and clicks. A case of schadenfreude, one might say. There’s some evidence that people react faster to negative words. Or threatening statements, even.

And that was exactly what happened when I stepped into the LangUR: Building Bridge Between Our Worlds exhibition at the Penang State Art Gallery late last year.

I admit I did not expect to be this invested in an exhibition about a particular species of primate. I couldn’t distinguish between a macaque and a monkey. But that headline – coupled with the ominous, crackling noise in the exhibition space – drew me in. It wasn’t long before I realised that it was the sound of a burning forest. It set a gloomy tone befitting the story which I was about to delve into.

Emotions began to run high halfway into the exhibition. Most of the 60 artworks exhibited by 60 artists seemed to share a common emotion: anger, or perhaps frustration. I did find myself asking this several times as I moved about the space: “What right do we have as the more intelligent being on Earth to be nature’s greatest predator?”

You would have found no shortage in the variety of mediums used in this exhibition, from watercolour, acrylic, oil painting on canvas, to photography, ceramic, mixed media and (surprisingly) jewellery. I was expecting to be overwhelmed by the sheer number of artworks on display – particularly after a hiatus from visiting a physical exhibition – but the flow was well designed to tell a wholesome narrative of this ill-fated creature.

Then again, I shouldn’t be too surprised. The curator, Ivan Gabriel, is an educator at heart, and storytelling is second nature to him.

The exhibition started off with an interconnected first and second section, aptly titled “Family Matters First” and “Parents & Child”. It gave us glimpses into the world of the timid and elusive species of the dusky langurs, who are also part of IUCN’s (International Union for Conservation of Nature) Red List of Threatened Species. A watercolour artwork by Koay Sheng Tat (“Happy Together”) showed a happy family portrait of the dusky langurs in their natural habitat – unperturbed by the looming encroachment of development. I felt a stab in the heart when I came across a polystone sculpture by Lee Yi Hui (“Mother’s Love”). A baby langur bearing a smile of innocence – yet to witness the ugly side of the world – clings close to the mother who seems to stare into us bearing the question: What happens tomorrow?

Then came the coming-of-age part of the story, just like what any of us has gone through. We move beyond the family unit to explore the world, with chances of encountering situations that threaten our very existence. The third and fourth section by the theme of “Individual (Moving Out to the World)” and “Threats” respectively, began to take on a more despondent tone. Two very contrasting pieces, deliberately placed across one another, could be interpreted as a form of communication between the artworks. In Jivarasan Chandrasegran’s “Homeland”, the mother embraces the child with a look of fear after witnessing Zaini Zainul’s “Back Off”, which shows a langur being besieged by the threat of weapons, cages and (predictably) human hands.

A similar interactive element was observed in another two artworks from those sections. The centrepiece, Sharon SS Kow’s “Look Deep into Nature” showed a young langur staring vacantly into the distance, perhaps to the atrocity that is the murder of his kin by Perhilitan in Port Dickson, as depicted in Bibichun’s “Entah lah”. It put the spotlight on the question: what happens now that the heroes have turned into the villains?

The lingering sense of loss carried on to the next section with the theme of “Death”. A row of monochromatic artworks presented a scene close to that of a funeral procession, and momentarily transported viewers to the afterlife. Are their deaths really the end? Amir Mansor’s abstract piece “(Anak Emas)” seemed to disagree. The diminishing circle as presented in the artwork was reminiscent of a dying star, and perfectly exemplified the petering population of dusky langurs.

It had good pieces set up to that point because the narrative builds upon one another. However, I felt thrown off from the main plot shortly after. I found myself at a loss between crossing from the second to the third act. Perhaps, it was meant to give us a quick breather after the heavy build-up. Fair enough.

Having said that, I liked it. It gave me moments to truly dive into the story of my two favourite artworks in this exhibition. In the most unexpected section, to say the least.

ERYN’s “Mother / Orphan / Pet” is rather unassuming at first glance. When the artwork is activated – by intentionally removing a significant piece from it, the repercussions are undeniable. A perceptible hole in the heart of the mother from the loss of her child, forcefully taken away for trafficking or unholy deeds. It brought to mind the message of an earlier piece by Azmi Hussin “(Missing)”. A closing performance involving that piece was slated for the closing week in December 2021. That warranted a revisit.

Throughout the exhibition, I couldn’t shake off the need to check out the source of the earlier crackling noise. Sweet as a lullaby, yet you were not able untangle the sense of ill from its rhythm. It reminded me of a fireplace, but I couldn’t be more wrong. An animated digital illustration by Sumidik (“home sweet home”?) painted the scene of a burning forest with the dusky langur being trapped in it. As the only source of sound in the space, it certainly spoke volumes.

Before the exit, there was a tribute corner to the late Nasir Nadzir. This exhibition paid homage to the Kepala Batas artist’s true-to-life paintings of nature through his three artworks on the dusky langurs.  The 31-year-old passed away on Jan 24 due to complications arising from Covid-19.

At the end of the day, what surprised me the most in this exhibition was not the artworks on the walls. Rather, it was the curator, Gabriel, who carved out the narrative of the artworks to life through his method of very personal storytelling.

That morning when I was there, he clocked in the 34th curator walkthrough since the exhibition started – and it was only Day 8! We informally agreed that he was now very much part of the exhibition, just as much as any of the artworks on display. He told me that despite undergoing three rounds of curation before the current manifestation, there is still more to be done.

Naturally, he left me to ponder upon this: “Can we co-exist? Is it possible, in the future, for us humans to accept urban wildlife as part of our concrete jungle environment?”

I can’t say I had any answers. And even if I did, I felt incapable of voicing them.