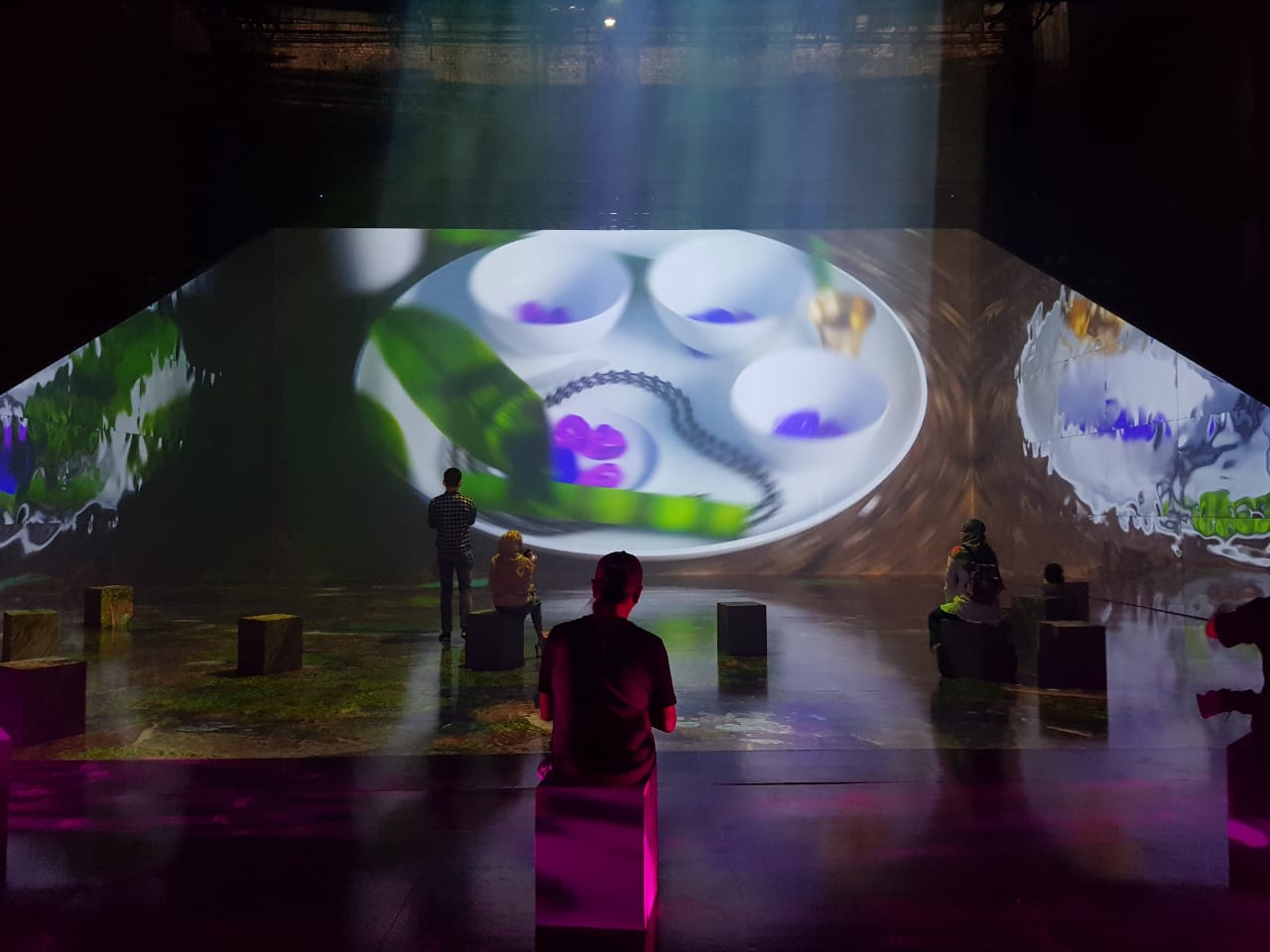 “Book your ticket more than once.” Thus recommends Yap Sau Bin, curator of Sensorium of Inversion/Immersion (SENSORii), a digital media showcase that explores interpretive viewpoints about altering actualities. Twice in two consecutive hours will be revelatory, Yap affirms, highlighting the exhibition’s immersive premise. “It’s an opportunity to learn more about the work, the space and ourselves in how we actually experience the art.”

In SENSORii the artists explore the many different ways to tell their stories, mainly underpinning memory. Yap’s conceptual framework is a catalyst to allow artistic manifestations to intersect. As part of this process, he does not dictate what the artwork should become. Instead, he hopes these pieces will go on to another life after the exhibition, growing in dimension. “This is the evolving vitality of digital art.”

The visually stimulating pieces on display encourage audience immersion in the 40-minute show. Metaphorically, the inversion aspect of the sensorial experience lets the audience admit themselves not only into the work, but also into the space. Not only that. “The other level of the inverting is that we are able to watch ourselves watching, while being inside the projected space.”

To elevate this progressive media expedition, specially composed music accompanies the artists’ aesthetic ideas. “The experience of incorporating live instruments, sampling and electronic loops just blew me away in terms of the boundaries that I could steer myself in writing music,” enthuses musician and composer Ahmad Muriz Che Rose, Director, Music Talent Development & Management, Malaysian Philharmonic Orchestra. He likens the experience to a rhapsody of feelings, creating sounds that at the end become inseparable from the visuals. For this novel collaboration, Ahmad Muriz worked with seasoned album producer and sessionist Firdaus Mahmud.

Instead of focusing on dedicated elements of each artist’s work, Ahmad Muriz, a member of CENDANA’s Industry Advisory Panel, translated his music into a language that would amplify the essence of the art works. The most challenging yet exciting component of his contribution to the show is the evolving realisation of each respective work, “As a composer, I had to translate the underlying intentions to match the visuals.”

SENSORii conveys myriad permutations of intersecting stories, unconfined by physicality or realities. The artists have taken liberties in their perspectives, stripping conventional, confining constructs. Says Yap, the vitality of being human, living in resistance to restrictions and continuing to live with these limitations is very significant. Especially in the last two years during the pandemic, “I think resilience of both our inner space and psychological space, as you see in a lot of this work, deals with memories.”

Hoping to unearth something even more exciting than he had imagined, Yap is looking forward to when the doors open at the repurposed cinema, REXKL. “We used to watch from about 20m away, but now it’ll be right in front of us and we are actually inside the image,” he explains. “We are shadows, projected onto the wall, floors and ceilings.”

Yap expects the space to be as illuminating as the artworks. A custom-built structure about 14x14m wide, and 7m high was built to accommodate the artworks. He considers it quite monumental to human scale, but comparatively it takes up only about a quarter of the size of the old cinema hall.

The raw interior of REXKL, says the show’s Technical Director Melissa Teoh, provides a multitude of possibilities. “REXKL is an iconic building which definitely adds another layer of character to the exhibit,” she asserts. This is despite several technical challenges such as having to level existing floors, rigging masking from the ceiling with limited access and safety pathways and replacing existing masking in the entire venue.

The structure design went through stages before the team found the right fit. Creatives, production, technical, suppliers and contractors have all integrated well in terms of working around limitations and challenges. Teoh has managed many international productions. These include musicals and festivals in South-East Asia, the United States and Australia, as well as Edinburgh, Scotland. She refers to synthesising the various elements: “… light, technology, art and music – interdependent and equally crucial in their own aspects.”

The immersive projection mapping that lands on the surfaces is the result of cooperation between artists and composer. “Viewing the video from a 2D flat screen and viewing it in an immersive L-shape structure is very different,” reveals KC Tan, co-founder of Fabu Design. Tan, whose clients include Khazanah Nasional, Maybank, Bank Negara and Petronas, not only collaborated on one of the artworks, but also leads his team in the artistic technical unit responsible for multimedia technical and solutions. The team provided the curator with technical suggestions, built tangible prototypes and a VR prototype of the structure. An LED prototype was also constructed for artists to load their visuals to test, allowing for full-scale implications.

“The beauty of digital work lies in its layers of manipulation, allowing for reinterpretation within the image of the artwork itself,” declares Yap, himself an artist whose work has been featured in the Havana Biennale, Venice Biennale, Shenzhen & Hong Kong Bi-city Biennale of Urbanism & Architecture. “In Primordial Memory, the play was in the binary setting, exploring complexity of the mediation between the organic and the digital.”

In the midst of this on-going pandemic, Tan is motivated by inspiring people. “To see possibilities at this time, inspiring the community to appreciate new media art and offering viewers a different perspective of city.”

For Melissa Teoh, with this project the word ‘communal’ strikes a chord. This is because everyone has been mostly confined to their own spaces during the global health crisis. “Being present in a space together and having a shared experience like SENSORii provides a platform for conversation, discussion and exploration.”

Many will feel, as she does, that art as a form of healing cannot be more relevant than in the present time. Both for the creators and for the viewers.

Join the sharing session with the SENSORii artistic and production team to learn about the processes and behind-the-scenes of the immersive media art exhibition this Saturday (Dec 4) at 2pm. Register for the talk here.

SENSORii takes place at REXKL from today (Dec1) until Dec 28 from noon to 8pm everyday (closed on Mondays). Admission is free but you must register here.