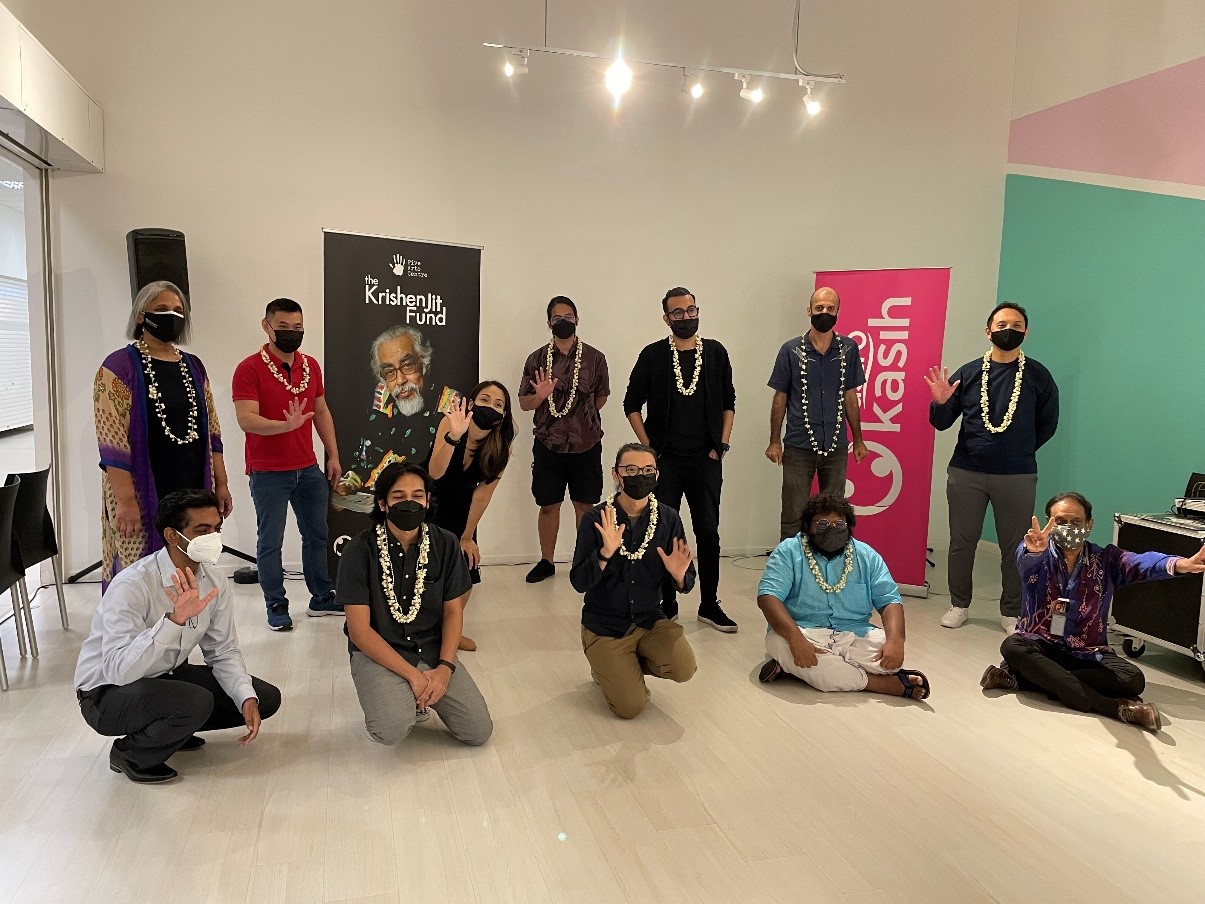 An unprecedented 11 grants were given out this year to 11 outstanding artists, all unique in their artistry and vision.

The Krishen Jit Fund was named in commemoration of the late Dato’ Krishen Jit, a Malaysian author, playwright, theatre director and critic. The fund’s main objective is to carry on Krishen’s work of supporting and celebrating Malaysian creativity as manifested in all areas of the arts.

It is no surprise to anyone who has been following the arts that many artists were hit hard by the Covid-19 pandemic. In response to this, the Creador Foundation greatly increased the support given to the Krishen Jit Fund, which allowed the fund to award 11 grants this year, a huge step-up from 2020’s four recipients.

The Creador Foundation is one of the organisations supporting the Krishen Jit Fund, the other being ASTRO. Creador Foundation has made many efforts to empower local communities. They have developed financial literacy and education platforms to help Malaysians, contributed to healthcare by providing medical equipment for hospitals and food aid, as well as provided support for klpac and the KLWKND event. ASTRO needs no introduction, being one of Malaysia’s leading content and entertainment companies.

Going through the list of winning recipients and their projects, one will notice how fresh and exciting their ideas are. Here is what they had to say on topics such as what inspired them to pursue their current projects, what they would be using the funds for, how the Covid-19 pandemic had affected them, and their advice to the younger generation as well as their personal musings on art.

Jeffrey Lim is a photography artist. His last project, Kanta Portaits, was about the oral narratives and collective memory of the indigenous folk of Malaysia and Taiwan and their concepts of identity. Khemah Kamera is a project to build a mobile canopy tent instant camera and to explore live projection of any objects from within the tent. The photographer also intends to engage and document communities providing services during the pandemic.

“It’s mainly a way for me to talk about oral narratives and collective memory,” says Lim regarding his Khemah Kamera project. “What I’m going to do is build a device that can do that.” He explains that the project is a way of capturing the unwritten, intangible experiences of his subjects.

Lim is overjoyed to be awarded the funds to make his project a reality. “I’ve had this idea in my head for a long time, and now I’ve finally put it to paper. All the funds will go towards the production. Building the device, and also collaborating with several artists.” He expressed interest in seeing how other artists will be able to use the device to talk about different narratives, and different subject matter. ‘I’m going to invite performing artists, dancers, storytellers.” According to Lim, the Khemah Kamera will not just be used as a mobile camera to take big pictures, but also to explore its usage as a performance device via projection of light.

“The pandemic affected me severely,” Lim said. “But it also gave me time to reflect on my work, and what I could do with it and where we can go with it to reflect our current times. This project came out of the pandemic.”

Rezza Coebar has experience in theatre, live music, sound design, projection work, and acting. Earthshine is a multidisciplinary showcase with a focus on technicalities. The aspects from the background of a typical theatre production, such as set, lights, and sound, are brought to the forefront.

“I was inspired by a show that told a story using only technical elements, such as lights. So we wanted something like that, but on a bigger scale,” Coebar says regarding what inspired him to dream up Earthshine. “We’ve been talking about it since 2019, and we just decided, you know what? Let’s just do it. Let’s just try it.”

It is certainly an ambitious undertaking, trying to tell a story without being able to depend on the core pillars of a typical production, such as actors, or dialogue. “I’ve been thinking about what kind of story we can tell with just technical elements, and it’s been quite hard,” admited Coebar. “I can feel it coming, though. I’ve almost got it,” he added confidently.

“It was a pleasant surprise to get the grant,” he added. “Two-thirds of the money is definitely going to the set. One-third of it is for documentation, videographers, photographers.”

When asked about how the pandemic affected him, says that online collaboration was a lot less intuitive and conducive compared to in-person collaboration. “I actually got more burned out than I would have if I was working with others physically.” He is looking forward to working and performing in-person again.

“I wish that, when I was younger, I did not tie myself down. I would not have committed to any kind of contract and instead have explored more,” he mused. Coebar urged young creatives to not waste their years after school on matters that are irrelevant to what they want to do, and instead figure out and focus on their creative path. “Take a gap year first, before deciding anything.”

Susan Philip is an Associate Professor in the English Department of the Universiti Malaya. She has several publications covering a wide variety of different topics. The Satira Archives is a limited soundscape/podcast series, covering a series of works from Malaysian artists and writers who identify as women. Their engagement with satire and humour will be examined, and the topics range from literature, visual arts, comedy, theatre, music and dance.

“My partner in this project, Ann Lee, brought up the idea of doing a podcast on the arts,” Susan said, explaining the origins of The Satira Archives. “I’m very much an academic, writing papers and so on. But this will connect to a wider audience. As we talked, we narrowed it down to certain aspects of the arts that we think are not covered. Newer work past the 1990s isn’t touched on very much. Work by women isn’t touched on very much. Satire isn’t discussed that much.” She said that this project was created to shine a light on these lesser-discussed topics.

“I was surprised to hear that I received the fund,” she laughed. “I applied a couple of times before and didn’t get it. A lot of the money will be going to the technical things. Equipment, payment for translators.” Susan said that she would like to translate the podcasts to other languages like Iban or Portuguese, to reach out to different communities.

Susan also had some words for anyone trying to pursue a similar path, “My advice would be to not worry about what other people might think about what you are doing. I’ve had students say, ‘I didn’t know we could talk about that.’ Don’t be too fearful about discussing things.”

The recordings are targeted to begin sometime in July 2022, and end in September of the same year.

Komeil Zarin is an Iranian born artist whose work focuses on themes of identity, belonging, boundaries and realities. In 30 Portraits in Exile, 30 refugees will have their portraits painted by the artist, himself a refugee. An art exhibition, an art book and video documentation will be the culmination of this work. The aim is to depict refugees beyond the single dimension that they are commonly depicted in – their state of statelessness. The artist wishes to put the focus on their humanity and individual character.

“I’ve always been doing portraits of human beings,” Komeil said when asked about the inspiration for this project. “My work has been concerned with refugees before. This time, I just felt that the refugees themselves could be the subject of the portraits. The significance of this for me is in that they are as much human beings as they are refugees. I would like to show them as the heroes. They are my heroes, they have qualities in them. Their bravery, their boldness, as well their vulnerability. Those qualities I admire.” He also added that this series of paintings will be more expressionist, not to show the pure physical appearance of his subjects, but rather their essence and humanity.

Komeil was glad to hear that he had received a grant, and says that all of the money will be used on the canvas and the paints needed to produce the art. Regarding the Covid-19 pandemic, Komeil says that the pandemic was responsible for giving him the idea for this project. The subjects of his paintings will be sitting for him, not in person, but via video call. This is to emphasize the sense of isolation. “Just like how the refugees could be isolated in a different country. When you video call them, you don’t know where they are. They are just behind the laptop screen. Within that frame. I want people to see their human-ness. These individuals, just like you and me.”

Komeil went on to speak about the nature of art, and the role it can play in education. “Art has the power to create meaningful connections across different borders, different times. My advice for young artists would be to educate themselves, to learn, through the Internet.”

The paintings are targeted to be completed and put on display in the first quarter of 2022.

Here are the rest of the talented artists who also received the grant, and a brief summary on their projects:

Dr Anthony Alexander Chong Vee Yee: Malaysian Sign Language (BIM) literature workshop is a project for deaf participants in Malaysia to develop BIM literature in many forms, such as poetry, drama or folktales. This will serve to build a body of BIM literature, and the final work will be presented in an online performance

FLUX28 Collective: Night Shift is a unique, interactive website that presents a narrative from the perspective of a fish. The user navigates with the arrow keys and action buttons. This aims to stir sentiments and present the themes of captivity, struggle and control by simulating the fish’s experience.

Izat Arif: A hybrid exhibition that makes use of an immersive installation to explore reflective materials, spatial parameters, and audience participation. The artwork attempts to trigger feelings of collective isolation and grief over the failed dream of Wawasan 2020. The ultimate goal is to create a space for contemplation on the current situation and for the artists and audience to reconnect through human interaction.

Fraulina Tajuddin: A web series educating young people and hobbyists on how to do animation at home with minimal equipment. The show will be hosted by Ms Minah, an inquisitive puppet.

Gogularaajan Rajendran: A documentary film and research project titled Plantation Life: As it was. Aimed at learning about the joys and struggles of Indian Malaysians who lived in plantations during the 1960s. Culture, politics, lifestyle, their relationship with nature and mysticism are all themes that will be explored. This study will be used to develop a feature film, Kaali

Syamsul Azhar Bin Mohamad Azmi: Dari Pinggiran is a live streaming performance featuring paired artists and their artistic responses to spaces in their neighborhood that were abandoned because of the pandemic. The name of the project is inspired by how the abandoned spaces are left at the edges of society, and how the isolation between these spaces and the people who occupied them continues to grow.

Arief Hamizan: Panas Panas Play Reads is a project aiming to conduct 60 online readings of plays over a period of 12 months. Panas Panas Theatre has been running online play reading programmes since 2020, featuring discussions with participants, and also with the playwrights if possible. Malaysian and international plays will be covered.