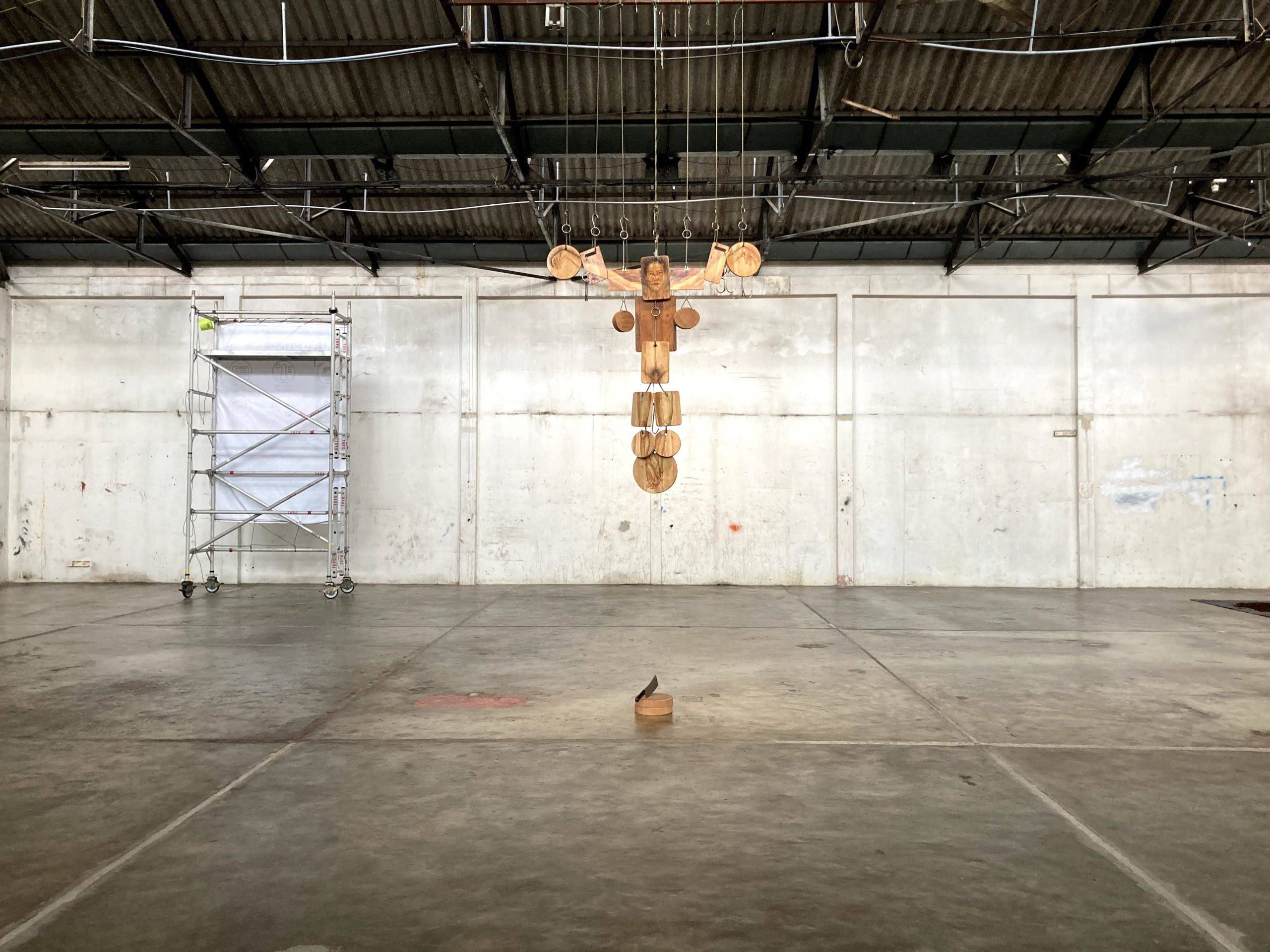 Tucked away inside the repurposed warehouse of KongsiKL hangs Chang Yoong Chia’s Meat on the Chopping Block. It’s an eerie sight: painted in watercolor, on a series of chopping boards hung together with meat hooks, is a man who is seemingly being crucified. The space is empty, and there is almost nothing else to detract the viewer from the scene —except directly below the man is a meat cleaver positioned neatly on top of another chopping block. As viewers move around the piece, Chang’s installation art becomes a tense reflection on power (and the lack of it), mercy and moral responsibility in a time of crisis.

“I unearthed an artwork made five years ago that expresses my feeling of being trapped in the uncertain political and economic situation at that time. That time passed [but still] reflects the state of imbalance and anxiety I feel,” writes Chang in his essay about the piece. Indeed, the hanging man mirrors many of the emotions that we may feel now in a precarious political situation, a pandemic with an indefinite ending, an increasingly polarised society and a declining economy.

Powerlessness to violence is the most immediate feeling in Meat on the Chopping Block. The lone watercolor man stares back at the viewer, his face haggard and sunken. He is emotionless despite the fact that his body has been dismembered, as if a piece of meat at a butchery, the hooks puncturing the parts of the blocks where lifelike skin and flesh has been painted on. His arms are splayed out, hooked at the wrists and his feet are crossed over the way chickens’ feet are found at the market.

Still, the man’s direct gaze confronts viewers. This gaze seems to question: who are you in this scene, in this precarious drama of the world? “Meat on the Chopping Block is a phrase which means ‘caught in a perilous situation where there is no escape unless the other party is merciful’,” writes Chang. Indeed, as viewers are forced to ask who they are: an active bystander? A passive observer? One of the crucified? Or perhaps one of those responsible?

With no boundaries set around the installation, the meat cleaver almost urges the audience to approach it. Its tidy and clean positioning makes the crucifixion scene slightly more unsettling. The closer the viewer gets to the meat cleaver, the closer they come to power and violence, and the more they must reckon with it. This is, in fact, part of the magic of Meat on the Chopping Block. Viewers are almost never separate from the installation. Their very position in the space forces them to be a part of the installation – whether in front of the man, behind him, below him, or slunk over to the side. Viewers are forced to take a position and reflect on power.

The hanging man of Meat on the Chopping Block leaves viewers with no answers about the future. However, like the crucifixion, the atrocity of violence also leaves room for a possible redemption, or salvation. As viewers leave the warehouse of KongsiKL, they may be tempted to ask: what does salvation look like after this political moment? And what would be my role in it?

“Meat on the Chopping Block” was staged at the KongsiKL warehouse artspace in October, 2020.