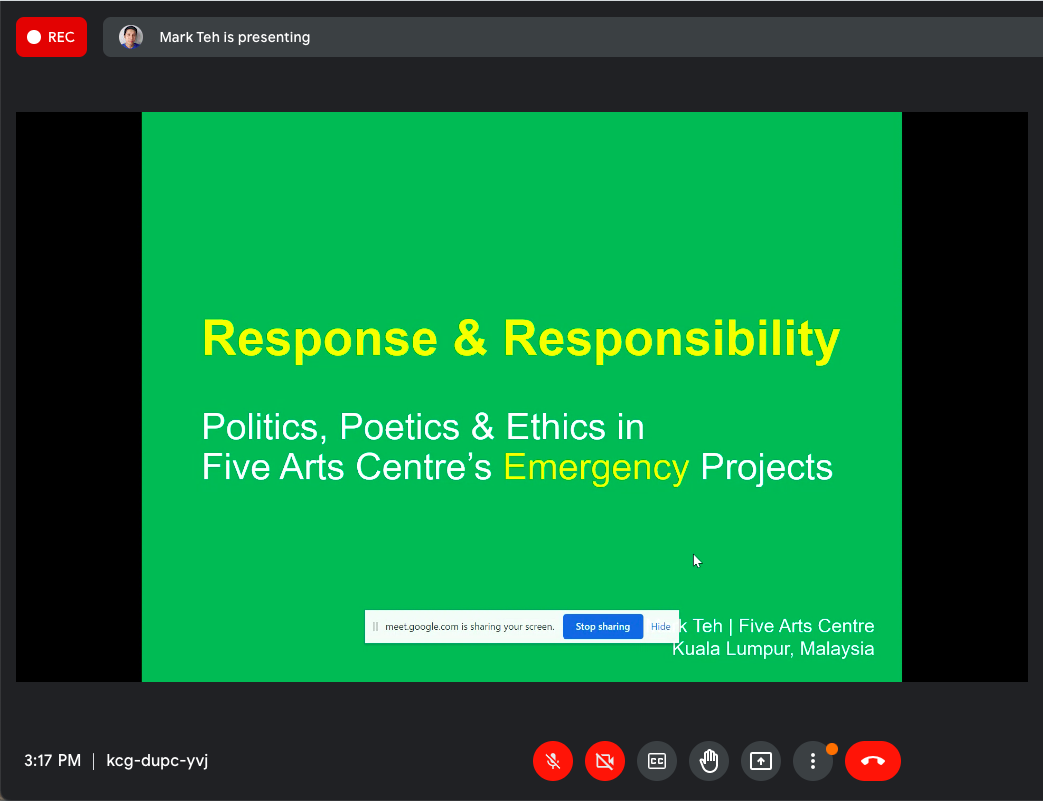 Performance-maker Mark Teh speaks about documentary theatre and his process in a dialogue hosted by Taiwan-based Fantasy Theatre.

There is a quote, often attributed to Winston Churchill: “History is written by the victors.” Most of the time, the “losers” of history – the dissidents, the traitors, the persecuted, the underclasses, those with less resources and ability – have been banished to exile, poverty, prison, or worse. The process of weaving narratives out of historical events is not simple or straightforward, and even the most well-intentioned historian is subject to their own hidden biases. Researcher and performance-maker Mark Teh seems to have understood this from a young age and, as such, has spent the past 15 years exploring theatre as an alternative and more participatory form of writing history. His particular historical period of interest: the Malayan Emergency.

He unpacked his process for a virtual audience last Sunday afternoon in a session as part of a series of talks titled “History, Memory and Documentary/Theatre,” organised by the Taiwan-based company Fantasy Theatre. Alongside Teh’s talk, there were two other talks in English that explored the burgeoning form of documentary theatre, featuring Annemarie Prins and Nan van House from the Netherlands and Youk Chhang from Cambodia. On that rainy Sunday of the 26th, Teh focused his talk on his series of works known as the Emergency Projects. Teh’s Emergency Projects are an ongoing series of performances that interrogate the Malayan Emergency from multiple angles: they look at the state’s narrative of the Emergency, those of the exiled Communist guerillas, and also the perspective of the generation that grew up in the aftermath of the Emergency.

The Emergency Projects consist of various versions of Baling (2005 – ongoing), the 11-day Emergency Festival (2008), and A Notional History (2019). All of the performances are collaborative efforts that also eschew conventions of theatre. The collaborators are mostly non-actors from disciplines outside of theatre and they often speak in plain oratory as they conduct their performative autopsy of various historical documents and sources on stage.

The way Teh tells it, it seems like the Emergency really began for him and his friends in the year 2007. The 50th anniversary of Merdeka Day.

“The year 2007 was a really fertile time to think about legacy and what it really means to be free. It was an important maturing of Malaysian civil society, there was a big explosion of political protest that had been missing in the Malaysian scene up till then. It was a coming-of-age of political consciousness for people of my generation, who are now in their 30s and 40s,” explained Teh.

This period, which was also the time of the first few Bersih rallies, saw a major crackdown of activists and journalists who spoke out against the government. Dissidents were still being arrested under the Internal Security Act, an act allowing detention without trial that was a direct product of the Emergency. There was a clear lineage between Teh’s reality in the late aughts (the decade from 2000 to 2009) as he experienced the turbulent dissent and subsequent repression around him, and the legacy of the Malayan Emergency. He decided to follow the old Communists into the thorny jungles of memory.

Theatre as a private investigation

Teh and his collaborators work in a form that has come to be known as “documentary theatre”, though he stressed during the talk that he hadn’t been conscious of doing anything that had any label to it when he first initiated the Emergency Projects. He was mainly conscious of trying to extract a truth out of a tangled web of weighted narratives. In pursuit of the truth, he and a few of his friends made excursions to southern Thailand to interview surviving Communist guerrillas about their experience of the Emergency and to get their accounts of why they did what they did, and how they live now.

In the early aughts, they interviewed Communist guerillas exiled in this tropical limbo. They later used the audio and video recordings of these interviews in several theatre productions, placing the Communists’ firsthand accounts alongside secondary sources such as excerpts from Malaysian history textbooks. Teh and his friends also sourced from their own family members’ stories of life during the Emergency.

One of Teh’s largest undertakings was the Emergency Festival at the Annexe gallery at Central Market in 2008, an 11-day affair that brought the public together to explore under-researched aspects of the Emergency. “To make connections with different Malaysias and Malayas,” as he put it. By engaging collaborators from other disciplines, he found new angles for studying the Emergency. His multidisciplinary practice is also a somewhat paranoid one; constantly doubting and derailing itself, on a constant search for a source that might challenge everything we thought we knew. His performances assume that nothing can ever be known with full certainty, since everyone is only telling the truth that they know.

In 2015, Teh finally decided to look into the mouth of the beast he’d been staking out for so many years. He finally decided to tackle the figure of Chin Peng, the leader of the Malayan Communist Party who had died in 2013, in eternal exile from his homeland. Teh managed to interview him once, in 2010. Parts of this interview were used in the 2016 version of Baling and 2019’s A Notional History.

Even in death, Chin Peng continued to spook the national consciousness. “(In the 2010 interview) He expressed how much he wanted to go back to visit the cemetery where his family was buried, to pay his final respects. And if he could not return, then for him to be buried or scattered near his parents. This statement stirred a lot of drama in the Malaysian government. They stationed guards all around the Thai border to check people’s bags to make sure they weren’t trying to bring back Chin Peng’s ashes. There was an amazing amount of paranoia,” recounted Teh of the time following Chin Peng’s death.

All of the themes explored in the Emergency Projects are, to this day, still considered highly fraught subjects in Malaysia. One can’t help but wonder whether the framing of the projects as a form of art doesn’t help somewhat in mitigating the reaction to them by establishing a creative distance between Teh and his subject — his beast. In terms of using art to rewrite history, perhaps no one is more renowned than American director Quentin Tarantino, whose revisionist historical dramas like Inglourious Basterds and Once Upon a Time in Hollywood offer a cathartic outlet for major historical traumas. Art allows us to speculate on alternative endings to history, and in the case of theatre and film, it allows us to act out those endings too. It’s no surprise that Teh likens his practice to “putting an editing machine on stage.”

Another way of looking at it is that they are “civilian historians or detectives.” Elaborating, he said, “The performers bring their own documents, footage, memes, images, and interrogate them on-stage – so audiences can see how a certain narrative is made.” The un-making of a narrative implies, in its process, the making of a new one.

While the saying that “history is written by the victors” feels true most of the time, Teh’s works of documentary theatre show the potential that ordinary citizens have to be part of writing their nation’s history. The projects also show that history doesn’t necessarily have to be written; it can also be sought out through a body’s movements and its voice. As one of the few people openly challenging the official narrative of the Malayan Emergency, the 15 years that Teh has spent on the topic show that the processes of uncovering and interpreting history can take as long as – if not longer than – the historical event itself. It becomes part of the history too.

“Response & Responsibility: Politics, Poetics & Ethics in Five Arts Centre’s Emergency Projects” was the title of a talk delivered by Mark Teh over Google Meet on Sept 26, 2021. The talk was part of the “History, Memory and Documentary/Theatre” programme by Fantasy Theatre, Taiwan.