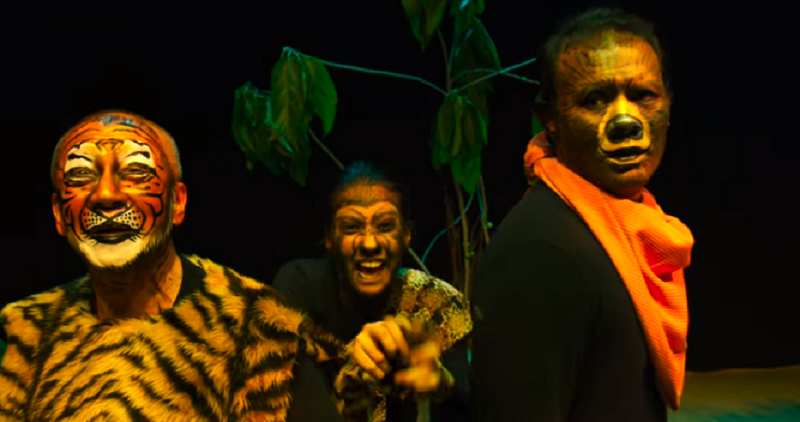 The more vividly  a person narrates a story to me, the more I find my curious side drawn in. I want to hear more.  Folktales and literature presented on stage give me that same thrill, sending me on adventures in different worlds and bringing out my inner child. I find myself in the characters’ shoes, living out the stories. The pandemic has forced theatres to close, so  KL Shakespeare Players (KLSP) took the opportunity to tell their stories online, enabling it to reach a wider audience. Founded in 2011, KLSP focuses on showcasing Shakespeare’s works, including Macbeth, A Midsummer Night’s Dream, Romeo and Juliet and The Tempest.  Not being physically on stage since March, they shifted to a virtual storytelling approach, with a characteristic twist.

On 18 September, they took a Sang Kancil story, How Beruang Lost His Tail, to the stage at Gerak Angin, Malaysia’s first virtual arts festival. All the characters, both animal and human, are played by KLSP co-founder and chief producer Lim Soon Heng, Zulhusni Zamir and Tika Mu’Tamir. The protagonist Sang Kancil, a crafty little mousedeer, is cleverly portrayed using a voiceover and shadow.

How Beruang Lost His Tail starts with three explorers hiking through the rainforest where they see Sang Kancil walking into Harimau’s cave. The story then transitions into the animal world. Monyet brings Harimau and Beruang into Harimau’s cave where Sang Kancil is hiding. Sang Kancil comes up with a plan to scare them off by pretending to be a tiger-eyeball eating monster. His plan works, and Harimau and Beruang are frightened away, leaving Beruang tailless.

KLSP should be applauded for their efforts in presenting lesser-known tales from Malaysia’s rich cultural heritage. In August, they performed Online Storytelling Sang Kancil, a 5-episode animated series of Sang Kancil’s adventures, narrated enthusiastically via Zoom. How Beruang Lost His Tail is another offering by the company which reintroduces a traditional and timeless folktale, making it interactive and engaging for audiences from different generations.

The story begins with them inviting the audience to escape the bustling city of modern Kuala Lumpur and explore the rainforest. Zulhusni says “the rainforests are here and there” but Lim retorts with “they are not gone yet”. This reflects how important the rainforest is to Malaysia’s ecosystem and lifestyle.

The story is short, but effective. In just 15 minutes, I was taken on an imaginative adventure into the Malaysian rainforest, where I got to know Sang Kancil and his buddies. Imagine having no rainforests at all, and all we see are modern skyscrapers.

The actors succeed in making  each character uniquely different while building strong chemistry. Lim imbued Harimau with a strong presence, allowing the audience to feel the character’s fury. Zulhusni’s Beruang provided glimpses of Malaysian humour, apparent when Beruang makes excuses to avoid going into the cave. Tika was effective as the mischievous Monyet who tricks Harimau and Beruang.

The detailed face make-up amplified the characters’ looks. One interesting aspect was the actors also performed as the explorers who had similar personalities to their animal alter egos, showing the viewer that the explorers are in fact, dreaming. In one such scene, Tika jumps, waking Zul and making him growl. Lim shows great leadership qualities by sharing his concerns about their safety in the rainforest. It prompted me to think about what animal I wanted to be, and what sort of adventures I would have in the rainforest.

However, at times, I felt a lost connection with How Beruang Lost His Tail. The tone of narration was a little forceful and intense. The loud audio affected the balance of narration while there was movement on stage. The close-up camera angles (at times shaky) on Harimau, Beruang and Monyet were often confusing. I wasn’t sure whether I was meant to watch them in action from afar or imagine myself talking to Beruang from Harimau’s view.

Here’s hoping to see other episodes of “Shakespearean” Sang Kancil stories, with more comforting audio that doesn’t distract from the story, better camera angles, and perhaps with Sang Kancil physically on stage.

At the end of the play, Zulhusni asked if we knew any Sang Kancil stories. Admittedly, besides Sang Kancil dan Buaya, I don’t know any other stories and I would like to know more about them. KLSP’s eagerness in performing Malaysian folktales – on stage and virtually – creates a safe space for the audience to have conversations about these stories.

Their performance  of Shakespeare’s works is a familiar format, with theatre performances around the world. Online Storytelling Sang Kancil provides interactive engagement with animated visuals alongside narrations. For How Beruang Lost His Tail on stage, it’s a compelling combination of both with plenty of room to grow.

KLSP is on the right track in creating innovative approaches to telling Malaysian folktales beyond the stage. No matter what platforms they use, KLSP is doing wonders in preserving these stories and reaching out to a wider audience. It is a great initiative in building future generations of Malaysian storytellers.