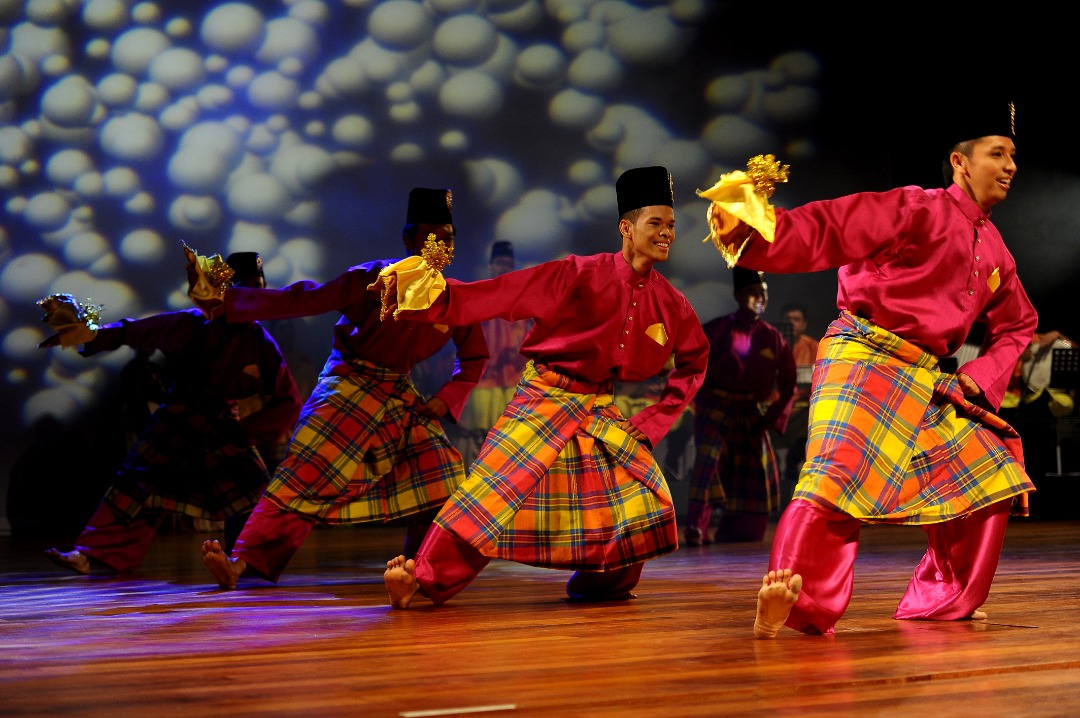 Zapin expert Prof Mohd Anis Md Nor has put together a performance for Panggung Rakyat to celebrate and elevate those who have made Zapin what it is today.

Malaysia has always been known as a melting pot for culture. Our multi-racial, complex and highly divisive origins have led to a hodgepodge of colours, flavours and textures. These forms coexist harmoniously in our country, many of which can only be found within specific communities, with exclusive traditions, customs and geographic locations.

One such art form which is not-simply-Malaysian, has its roots traced all the way back to the Middle East.

Tarian Zapin is a dance form that began with the Zapin Melayu Johor, a hybrid dance that adapted elements from the Zaffin music of the Hadhrami Arabs and local indigenous people. The marriage of these two traditions was brought about when the Hadhrami Arabs began migrating from Hadhramaut, Yemen, settling in South-East Asia.

Officially, Zapin Melayu Johor is performed at weddings. Unofficially, Zapin is performed in villages and towns in Johor, as a way for local communities to get together and share in good spirits. Often known as “playing or play-acting” Malay-Arab music, Malay songs are sung alongside Arabic rhythms, while people execute various dance steps and body movements.

To celebrate this traditional art form, CENDANA is featuring a Zapin performance as part of its fortnightly Panggung Rakyat series. On Oct 23, this Saturday, Panggung Rakyat will feature the episode Traditional Artform of Zapin Melayu (Johor), a collaboration between the Nusantara Performing Arts Research Centre (NusPARC) and Yayasan Warisan Johor.

Artistic director Prof Mohd Anis Md Nor is the Managing Director of NusPARC and also a Research Fellow. He is also a trained performer himself, having been involved in the performing arts since his early childhood days.

“My parents were very supportive,” said Prof Anis. “They were both teachers and lovers of the arts, and they both truly enjoyed dancing,” said the professor, recounting how in the 1960s, his parents would go out once a week to dance in the ballrooms.

Prof Anis grew up watching them practice in their home, and as a result he started dancing very young, and was even taken to his parents’ own dance teachers. “We would perform Boria together as part of televised competition events,” he added.

Upon his return, he began setting up schools and other education programmes focused on the arts. The famous Akademi Seni Budaya Dan Warisan Kebangsaan or ASWARA academy located in the epicentre of Kuala Lumpur was among the major projects he was involved in after he came home.

In the 1980s, Zapin was almost on the brink of extinction. “I was asked by Royal Professor Ungku Aziz, the Vice Chancellor of Universiti Malaya then to document Malay Zapin in Johor. This was when I realised how deeply Zapin meant to the people of Johor but was no longer practiced.” Prof Anis spent his 20s visiting several places all around Sumatera, Indonesia, to find out if there were any links to Zapin Johor, and his studies took him to many Muslim communities all around insular South-East Asia, all of whom identified a form of Zapin as a special and sacred tradition in their communities.

Since 1995, he has been tasked to revive Zapin Johor through Yayasan Warisan Johor. He continues his work in Zapin today, and has since published two books on the art form, and released two albums.

When asked if his books are a “handbook” on Zapin, he says no. “I created a crucible. I don’t like calling it a handbook. A handbook would imply that it is the sole dominating power of Zapin. It is not that.”

Prof Anis’ work is not just limited to textual works. As a performer, he has been able to take an active role in the growth and evolution of the art form. “The armchair scholar will not be able to be an extended voice for the beholders,” he says.

Prof Anis explains what makes Zapin Johor unique. “Most of the Zapin that we have in South-East Asia was recognised by the Royal Courts. But in Johor, Zapin was never part of the Royal Court. It was the people’s performance. Interestingly, without royal patronage, it still remains today.”

The learned professor explains that the reason for this is due to the individual elements that make up Zapin: “It is Malay, it is Islamic, it is a refined form, the music reminds you of Islamic teachings, it separates boys and girls, and it can be performed even in mosques and suraus, without being seen as deviant.”

It is common knowledge that many traditional dances are usually associated with a form of spirituality, an element not often seen with Zapin. “These dances are purposefully performed for healing, Zapin does not do that,” he explains.

“Take for instance, Kuda Kepang. It is performed as a means to heal the village. When locals notice something bad happening, like all the chickens dying, there’s an imbalance, so you would begin a cleansing ritual. That was sustainable, until vaccines came along.”

Zapin came after the assimilation of Islam, it was not present before, unlike most other traditional and indigenous dances. Prof Anis argues that this is the reason why Zapin is still actively practiced until today. The art form does not fall prey to the evolution of nowness, it remains relevant due to its naturally evergreen origins.

The upcoming Panggung Rakyat episode featuring Zapin is a piece carefully curated by Prof Anis with the hopes that the performance will not only highlight the beauty of the dance to younger, newer audiences, but also instil a sense of pride and inspiration for Johoreans.

Zapin is a tradition that came from them, and if an online presentation were to be commissioned, Prof Anis wants to ensure that these very people are able to benefit from it as well. “That’s why I wanted to do it with people from Johor. I want them to be happy with who they are and what they have done because I have a much bigger agenda, I want the tradition to continue in Johor.”

When asked about the future of Zapin, Prof Anis remains optimistic. “I honestly think Zapin will continue to survive. I’ve seen it myself when I was a visiting professor in a university in the States.”

Every year, Malaysian students in foreign countries would have a concert known as “Malaysian Night”, where they would come together and put on various performances to celebrate their home country. “They performed Zapin, and I was shocked. They got the songs correct, they got the dance moves correct. When I asked them who their teacher was, they said no one. They learned it from YouTube!” Prof Anis echoes how social media reaches all corners of the world, and if the younger generation were to continue sharing their love for it, the Internet would ensure that the tradition lives on!