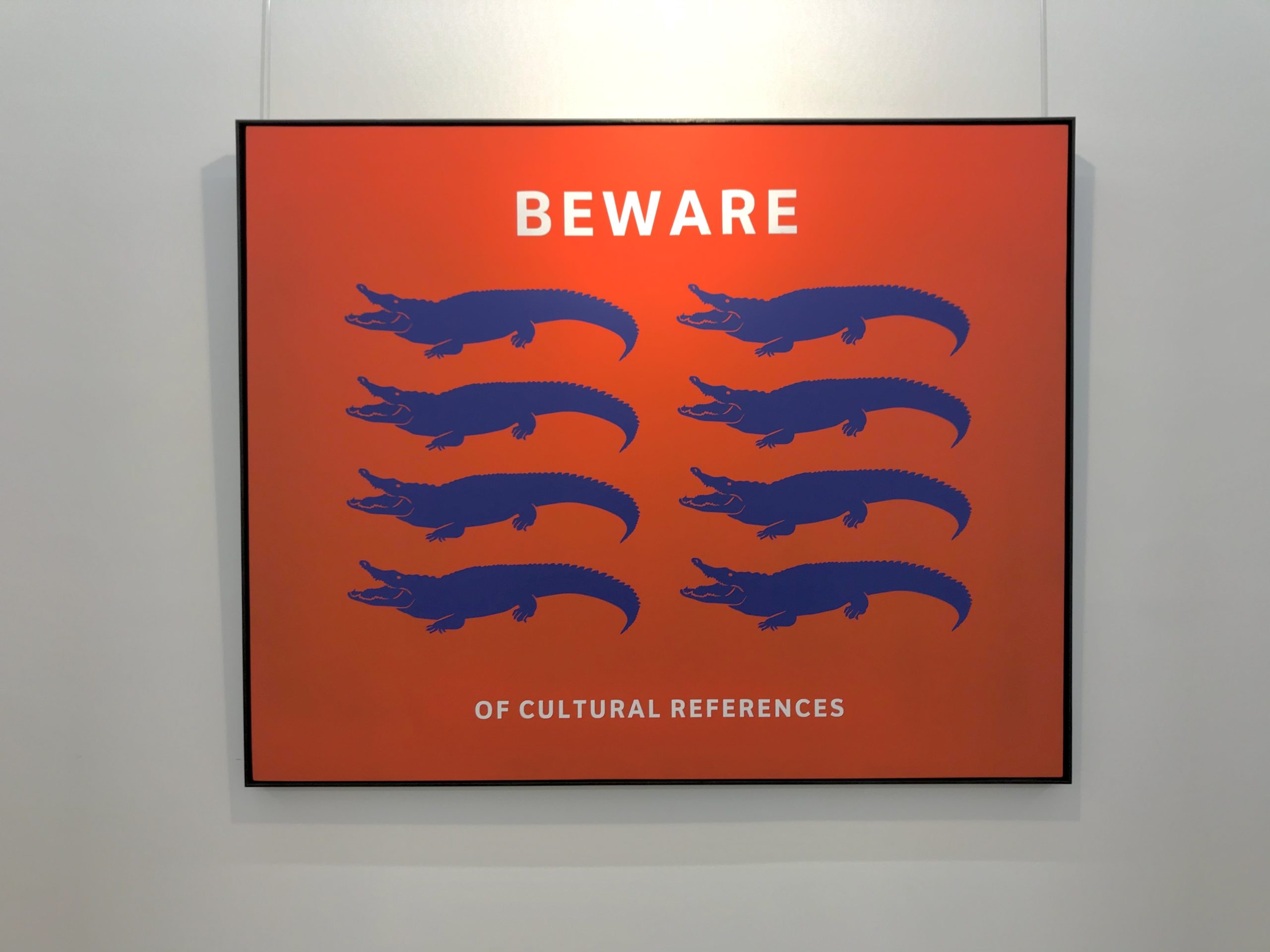 In Gentle Reminders, Izat Arif appropriates the style of typical road signs to present pithy advice for younger artists of the obstructions they’ll face in the art world. Airbrushed with automotive paint and lacquer, the paintings have a slick, striking look against the white walls of the newly relocated Richard Koh Fine Art gallery in Kuala Lumpur. The messages have a biting wit, but the exhibition is truly an “art world” exhibition, in the sense that it essentially consists of inside jokes that perhaps only someone with many years of experience within the art scene would understand.

The works satirise the various tiny sins and hypocrisies that Izat has observed among artists and other art-world figures around him, by distilling them into a few ironic epigrams. There’s no one consistent style for the advice given by the warning signs; some are written like straightforward warnings, while others are written more like advice, or haughty musings.

Mostly, the exhibition punches up. With the works “If You Ever Feel Lonely” and “Learn To F*** Off” (the artwork titles can only be found in the online catalogue), Izat criticises those artists who make a name for themselves by pandering to collectors and their preferences, effectively sacrificing their vision and artistic independence to become an artist-for-hire. At the same time, he recognises the brutal disillusionment that crushes all young artists as they realise their parents had been right after all, and that there really isn’t a future in the arts. “Maybe you can get a day job at a gallery to pay your bills,” he drily advises in one work.

There are multiple ways of selling out, and Izat’s out for everyone’s blood … not just the rich guys. “Life Still Goes On For The Rest Of Us” mocks artists who centre their personalities and art practice around their perceived oppression while continuing to exhibit in art galleries, which are the most exclusive platform there is for fighting truth to power. Meanwhile, “Sword Fight” is an attack on group exhibitions that tackle wishy-washy universal subjects such as spirituality, while limiting their perspective to a male-centric artist line-up.

Whether his epigrams are true or not is a question left for viewers to soul-search and answer for themselves. As mentioned above, it’s very much an inside-joke kind of exhibition, and if one has enough experience in the local art scene, it’s easy to link potential faces to some of the paintings. Oh, this one’s definitely about him… Is that really how he feels about her?… Wait… Is this about me? Even if they are about you – and some of them feel rather specific! – it’s up to you to decide whether they’re true, or not.

The title of the exhibition is slightly off. The works aren’t “reminders”, but rather provocations, and that is their only task. That they manage to instill a momentary doubt is necessary, like being plunged in cold water to awaken the senses. Doubt forces you to straighten up and answer for yourself.

But the knife Izat brandishes is double-edged; each outward movement he makes causes it to twist deeper within himself. The most common response to provocateurs is: “and where do you see yourself within all this?” In his artist statement for the show, Izat claims that he is “privileged”, and views his work as a way of unburdening younger artists of their art world illusions before they go and get their hopes up.

His Gentle Reminders don’t offer a way out because, ultimately, they are commodities within a commercial gallery. It could be argued that Izat is not taking his critique far enough to undermine the class contradictions of the global art market itself and that his critiques are simply another form of artistic “style”. Is this simply his “beat” (to borrow a term from journalism), his “unique selling point” (to borrow a term from marketing)?

The resentment is justified, but when an artist’s resentment is displayed too publicly, it can easily be used against him. To take it a step further, perhaps the “oppressed artist” Izat mocks, who airs his sob story within the elite walls of a white cube, is himself.

Izat is a bad boy artist known for making brittle artworks that combine visuals and pithy text critiquing the hypocrisies he observes around him. It’s what makes him stand out – for now, at least – but if he keeps on this track and accrues any more fame for this style of art, then he’ll eventually fall victim to his own hypocrisy of making art that critiques the art world while benefiting from its structures of inequality.

We all want to see him succeed without losing his fangs in the process. So, he had better start planning now how to “Houdini” himself out of that contradiction when it inevitably confronts him!