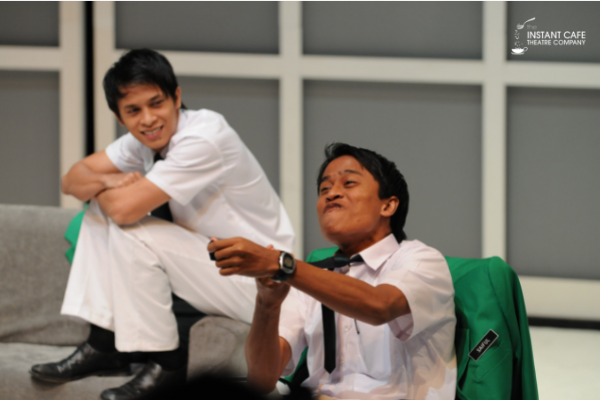 Embracing the digital world and the opportunity to provide everyone with access to plays from the past, Instant Café Theatre is dusting off Air Con from its archives this weekend.

Air Con is a “multi-layered narrative”, as co-director Zalfian Fuzi observes, that explores issues relevant then and now. Diving into the world of SM Sultan Ahmad Tajuddin Mukarram Shah, a prestigious boys’ school in Kedah, the play traces what happens when a sex worker is found dead at the abandoned railway tracks near the school. A veneer unravels, revealing unresolved complications beneath.

To learn more about this month’s revival of Air Con after its last staging in 2009, co-directors, Jo Kukathas and Zalfian, and Instant Café Theatre’s producer, Tan Cher Kian, shed some light with BASKL.

Before Air Con was first staged in 2008, playwright Shanon Shah worked tirelessly on honing the play to its present state,as part of ICT’s longstanding FIRSTWoRKS programme, aimed at nurturing new writing for theatre.

The process involved multiple staged readings and an overall collaborative process, where feedback was integral to its growth. “By the time we’d seen it (on stage),” Kukathas shares, “there was a lot of growing interest in it.”

But what led to a revival of Air Con at this moment in time? Kukathas states that the initial response to the play was thunderous, “exceeding what we’d expected”.

So much so a Facebook page was made during its initial run, asking for a restaging. The impetus behind reviving Air Con in the public memory today, then, occurred when Instant Café Theatre staged an online version of Alfian Sa’at’s Parah in 2020, titled Zoom Parah, as there were issues waiting to be explored further.

As Tan stresses: “It seems the issues we were talking about in Air Con are still happening. We have an obligation to our audience, in a way, to respond to the situation that we have in the country now.”

Nodding in agreement, Kukathas adds that a core motivation behind reviving plays such as Air Con, Zoom Parah and another ICT production, Nadirah by Alfian Sa’at, rests in using these screenings to have a conversation.

“Planning Air Con wasn’t just about screening Air Con,” she says. The play has been pre-screened, one of numerous ways ICT is presently branching out to engage with non-theatregoing communities.

Given an appetite for a revival, apparent in the positive reception ICT has received since the announcement of Air Con’s return, one wonders about what audiences have responded to, then and now.

“I think it was a damn good play,” Zalfian notes. “To me, it was a love story. The greatest stories are ultimately all about love, even love for the wrong reasons. While the play offered no solutions to the issues it explored, the questions – of sexuality, religion, moral policing, government and more – remain resonant and relevant in 2021.”

As a play set in a school, the directors underscore that it was a unique setting for its time, where it was the “first time we’d seen a Malay school – a Malaysian school – put on stage”. They add that subsequently, a lot of productions after, be it on stage on in film, had similar settings.

Another issue was that of language, to which audiences responded strongly. The play is written in Kedah Malay, foregrounding the importance of writing in various languages. “Malaysia,” Kukathas highlights, “being such a polyglot country, shows in the play with Malay, English and Hokkien … I think that contributed to something Malaysians hadn’t seen on stage yet.”

Though a number of people wanted to see the production during its original runs in 2008 and 2009, they were unable to get tickets. Tan interjects, “I didn’t get to watch it!”

Since the start of the pandemic, theatres such as the National Theatre in the United Kingdom, our very own KL Performing Arts Centre (klpac) and WILD RICE in Singapore have offered limited-time YouTube screenings of several of their recorded productions. As a result, conversations around the inaccessibility of pre-pandemic theatre – in its multiplicities – have heightened in the mainstream.

ICT realises the “importance of the digital world” in the contemporary landscape, where its productions have been accessed by people all over the country, as well as a global audience. When the company returns to going live on stage, ICT hopes to continue the same vision of making its productions accessible to a wider audience, through recording productions and subtitling them in different languages.

Finally, what are their hopes for the revival?

Zalfian emphasises the importance of enjoying theatre above all else, stating that he gets “a kick out of watching just really good theatre”. Though good theatre is hard to find, he says, he believes the best way of drawing audiences in is by putting forth a show that is loved by people on a mass scale.

Air Con, he feels, offers a “mirror of society”, one which “anyone who’s grown up in Malaysia will realise”. Zalfian goes on to note: “When Jo is ready with her next big show, and people have been exposed to this online screening, people will want to see more.”

Kukathas agrees, adding that she has an interest in CSO (civil society organisation) outreach as well, adding that she hopes the play opens up “people’s ability to accept dangerous subjects” and to “allow people to use the arts as a way to foster a conversation.”

Tickets for Air Con are available here, on a pay-as-you-like basis.