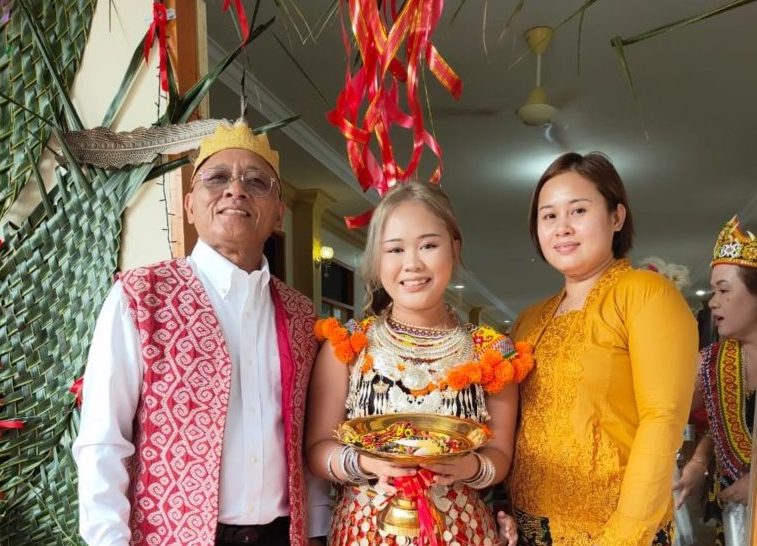 The people of Sarawak are very proud of their rich history, culture, and celebrations, such as Hari Gawai.

“Hi! My name is Sidin Anak Dian and I’m an Iban from Bintulu, Sarawak. I was born on April 15 in 1961 and I am now 61 years old,” said Sidin cheerfully, adding that the secret to always looking young and healthy is for one to be happy.

That was exactly how Sidin Anak Dian started the conversation with BASKL recently, when we wanted to know more about what Hari Gawai is all about and why this is the biggest celebration on the annual calendar for the Dayak, a general term for the people of Borneo.

According to Sidin, Hari Gawai falls on June 1 and is celebrated to give thanks to spiritual ancestors for a successful rice harvest. The meaning of the word Gawai is “celebration”.

Gawai has been around for a long while, even before the establishment of Malaysia. In the past there were various types of Gawai – for example, Gawai for the sick and Gawai for spiritual purposes but the biggest of them all was the harvest festival.

Hari Gawai was first gazetted as a public holiday on Sept 25, 1964.

“Prior to that, Gawai had no specific date so whoever wished to hold a Gawai could just have it anytime,” shared Sidin, adding that there were more than 20 different types of Gawai. The official holiday Hari Gawai soon became a symbol of unity, aspiration and hope for the Dayak community.

Sidin is an Iban, one of the many ethnic tribes in Borneo. He says that even within his long house, there are people from different religions – Christian, Islam, Hindu, Bahai – but they will all unite when it comes to celebrating Hari Gawai.

Sidin shared that festivities might differ from long house to long house. Preparations and activities are usually decided upon and coordinated by a management committee. The one on which he sits as Assistant Chief (or Mandal as the locals call it) is for Rumah Jangu Ladong Tahir in Bintulu. “We have many bureaus – one for traditions, one for games, one for food and many more. Each one of them will have their own tasks for the festival.”

This long house is most probably one of the most modern long houses equipped with everything a modern city house would have, even fire insurance! Sidin’s long house has 34 doors which means 34 families reside there, and everyone comes together during the festival. “The door next to mine is my nephew, his family is Muslim and I don’t mind. When it’s Hari Gawai, we all come together to celebrate” says Sidin, who believes in the spirits of his ancestors.

On Hari Gawai, the day is packed with fun-filled activities that aim to foster unity and strengthen the bond between all. One main event is Pekit Kumang, a pageant competition to showcase the traditional costumes of the Iban. Usually, the young women will represent their family at this event. There will also be other events such as singing competitions, poetry and even the famous blow pipe “sumpit” competion.

Among the famous dishes offered during Gawai is pansuh which is meat cooked inside a hollow bamboo tube (similar to what the people in the peninsula call lemang). Everyone also enjoys the locally brewed tuak, or rice wine. According to Sidin, tuak is a must! They prepare it as early as a month before the festivities start.

A huge celebration like this can only happen if most members of the long house do not move out and Sidin acknowledges that. “In our culture, going out of the long house is to cari rezeki (which means to earn a living) but once they have found it, they will come back home,” and home is the long house.

Traditionally, long houses were built for safety and protection. During Hari Gawai, however, they are much more as they signify the coming together all residents. A successful Hari Gawai celebration is dependant on this. “When there is a task to be done, everyone chips in, everyone helps each other to lift the burden of another person,” said Sidin.

Sidin, a proud Sarawakian, said: “I really love Sarawak. I have been to so many places around the world but once you have fallen in love with Sarawak you will never want to leave.”

Check out other interesting BASKL stories on Sarawak like the newly opened Borneo Cultural Museum and a special Panggung Rakyat documentary on Sound of Borneo below.

Featured Image on top of the page is of Sidin Anak Dian and his daughters Qharatul Aynn Sidin and Lorna Sidin.