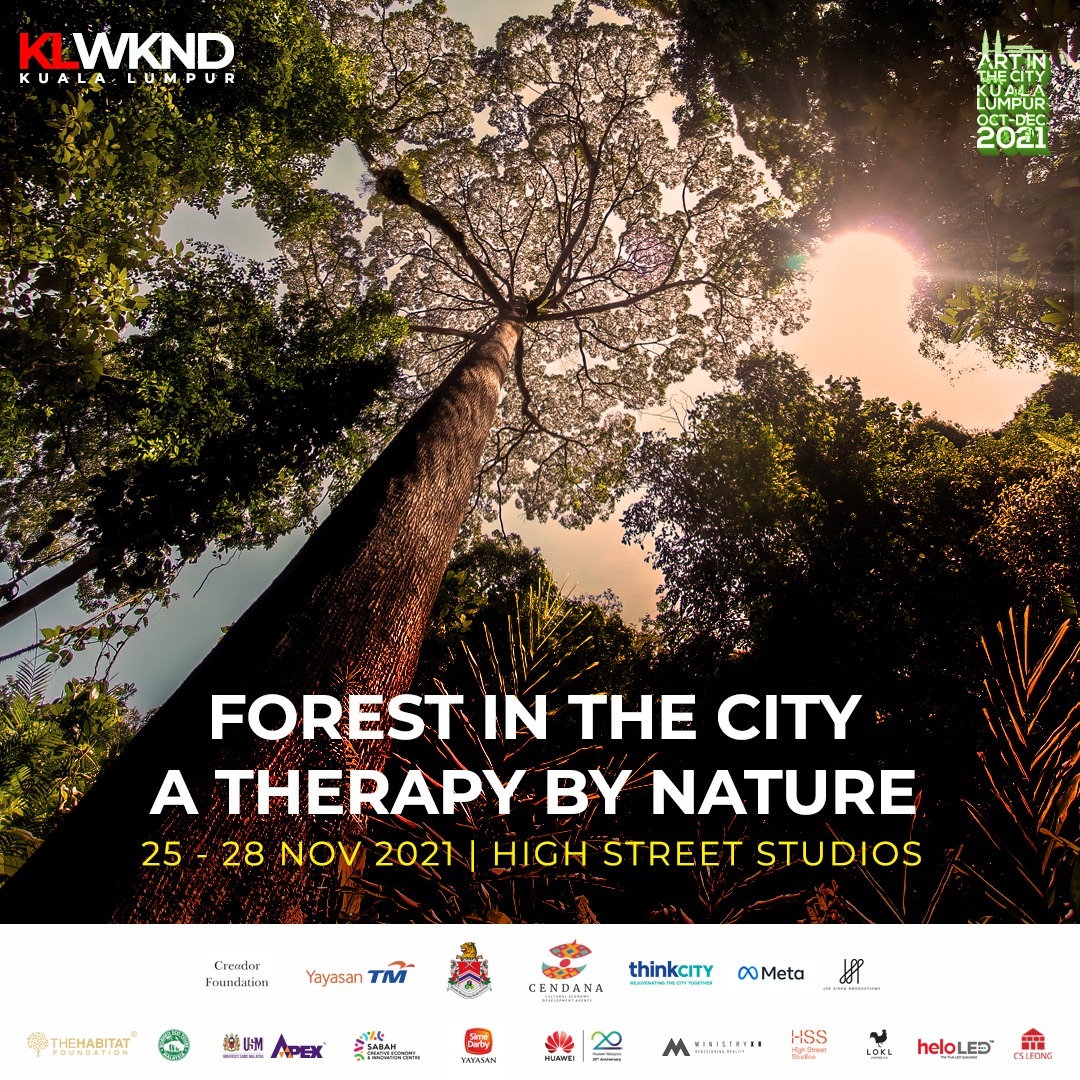 Nature brings us its healing spirits and hidden stories. Discover how Forest in the City at KLWKND last November unveiled this therapeutic experience with an interesting convergence between nature and technology.

By ATIKAH HANAFI for Lensa Seni

There is something about being close to nature that feels therapeutic – the crisp air of the forest, the singing of birds and majestic trees. However, not everyone is able to unleash their inner Jane Goodall and venture straight into a forest.

That was why Forest in the City – one of the many exciting instalments and exhibitions in conjunction with the inaugural KLWKND last November – was a breath of fresh air for city dwellers.

Promising to provide “a collection of spaces where you can unwind, relax and heal with nature, through technology”, Forest in the City lured visitors with content and programmes that would “rejuvenate, refresh, inspire and reconnect you to nature” through virtual reality, surround visual rooms and film screenings. The programme took place from Nov 25 to 29, 2021 at High Street Studio, a quaint little space located at Jalan Tun H.S. Lee.

The Healing Spirits of Kinabatangan took us along the Kinabatangan River, the second-longest river in Malaysia. Brought together by Universiti Malaysia Sabah and Borneo Eco Tours, and powered by Sabah Creative Economy and Innovation Center (SCENIC), the short film featured snippets of wildlife in the forest of Borneo, along with thought-provoking messages that invited the audience to reflect upon life and the value of nature as a healer.

“STRESS IS A GLOBAL EPIDEMIC.” These  words were emblazoned on the screen; having the statement written in all capital letters felt like a loud ringing alarm that refused to snooze. Stress and mental health issues are on the rise these recent years, most of which have resulted from the uncertainty of COVID-19 and pressing work demands.

The film emphasised that in nature humans can find the simplest solution to their anxious minds. Sound and images of forests such as proboscis monkeys, elephants and alocasia, as well as a close-up image of a large centipede accompanied this message for greater effect.

The short film ended with a poignant note beckoning the audience to: “Come home. Nature awaits for you to heal.” On the screen, a man was seen riding on a boat along the Kinabatangan River with a pensive look plastered on his face. Behind him, the forest view stretched wide, romanticised by a reddish-orange tinge of the setting sun.

The film was just six minutes long but it was enough to take me back to my days in Suai, a remote district in the outback of Sarawak. I was disconnected from the city and modernity but never had I felt more connected with my soul and the world. The silence and calmness of nature, just like the film, soothed my restless soul. The film felt like a much needed prescription after a series of lockdowns.

Unfortunately, the same couldn’t be said to the set-up of the screening as the space felt too small and constricted. The anomalous three-panelled screen seemed foreign to the cinema audience. With one facing the audience and the other two standing perpendicularly on both sides, the screen formed an incomplete square.

Since the film’s message also relied on texts that appeared on the bottom of the screen, those seated at the back faced a problem reading them. The audience would also find it difficult to balance between reading the texts and appreciating the film as a whole due to the screen’s positioning.

The setting did heighten the effect of being close to the wildlife creatures and forest. However, the screen seemed too close for the eyes, making the film too pixelated to be fully appreciated. In a way, the claustrophobic screening space juxtaposed the vast open forest shown on screen. Intentional witty play of space or just a coincidental irony?

Up Close and Personal with the Bateq

In Elders of our Forest, Ministry XR in collaboration with documentary journalist Mahen Bala brought us an immersive journey into Malaysia’s tropical forest. The VR project incorporated the latest technology and interactive modes of presentation which allowed us to get a 360o view and a close-up experience with a Bateq family. The Bateq originally lived freely in the rainforest of Peninsular Malaysia but due to encroachment, they were forced to inhabit Taman Negara National Park, Pahang.

It was definitely a rare opportunity to get this close with Malaysia’s Orang Asli without having to travel hundreds of kilometres. Narrated by one of the Bateq, the film gave the audience the chance to catch glimpses of these aboriginals’ lives through their language, daily practices and traditions, as well as fears of the imminent dangers of poachers.

The part that caught my attention was when the narrator explained the funeral rites concerning the death of their people. Whenever there was a death in the community, the Bateq would venture into the deepest forest and build a high shelter to place the dead body. They would spend a night with the body before coming back home. “When we die, we return to the forest,” the narrator said, thus symbolising the close relationship between them and nature.

Towards the end of the narration, the shot moved to a few Bateq children running happily into a river. Despite the joy and laughter in the background, the narrator’s voice was solemn when he proceeded to say how their lives had changed over the years. The forest that was once their safe abode now has become a source of fear with the presence of uninvited guests lurking to steal away natural resources. In contrast, they no longer dare to wander deep into it for fear of becoming the victim of poachers and resort to living in the outskirts of the forest.

The natives are now the outcasts of their own home.

As I removed the VR goggles from my face, my heartstrings were tugged as I reflected over the sombre fate of the Orang Asli and all the creatures that call our tropical rainforest home.

In terms of its technicalities and use of space, Forest in the City could have done with more films of longer duration and better flow, as well as interactive exhibitions and pop-up stores to make it more engaging. Nevertheless, the programme did deliver some core messages to visitors and I did come out of it having my heart stirred.

Our forest is crying.

And deep within me, my soul is crying too.