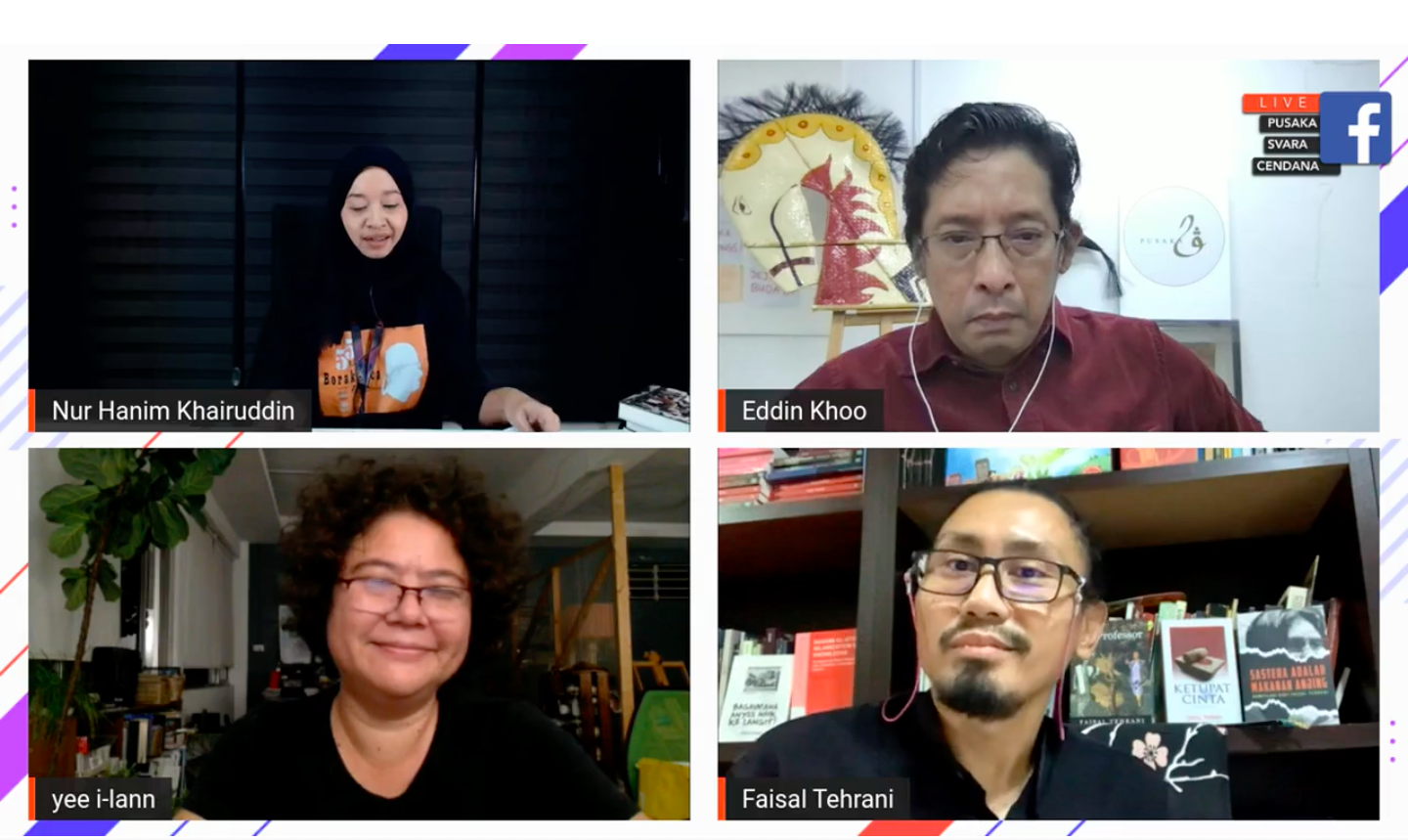 Fifty years ago, a group of predominantly Malay men gathered to discuss the direction that national culture should take. Is what they discussed then still relevant today? Many people evidently think so, since a recent panel on the topic that was jointly hosted by CENDANA, Svara, and PUSAKA was well-attended and abuzz with discussion.

A lot of young people probably don’t know about the National Cultural Congress (NCC) of 1971, even if they’re involved with the arts locally. But at the time, it was a pivotal moment in the history of Malaysian arts, and signalled a shift from a rather laissez-faire and secular attitude in art to one that was more ideological and limiting.

The Congress brought together 54 of Malaysia’s leading cultural practitioners to discuss culture in the service of building a national identity. “Culture” here was used in a broad sense, spanning five key areas: language, official attire, the arts (dance, music and carving), architecture, and food. The breakdown of the Congress was predominantly Malay, with only eight non-Malays present. Of those, only six were women. And James Ongkili, a Sabahan, was the sole Bornean representative there.

The online session pulled together three very articulate and accomplished cultural luminaries: Eddin Khoo, a writer and historian of Malaysian cultural heritage; Faisal Tehrani, a writer and essayist; and Yee I-Lann, an artist whose recent works engage with the handicraft traditions of her native Sabah. It was moderated by Nur Hanim Khairuddin, a renowned artist, curator and writer in her own right.

The NCC was convened in the long shadow of the 1969 race riots. Two years after the Congress, a National Culture Policy was formulated which, like its more notorious sibling, the National Economic Policy, tried to implement a more Malay orientation onto Malaysian culture. Specifically, the National Culture Policy championed the traditional “indigenous” arts of Malaysia (meaning Malay cultures before the colonial era) and proclaimed that Islam must be an important component in cultural production. Other non-Muslim and non-Malay cultures were deemed unworthy by their omission from the policy – but “suitable” elements from them could be cherrypicked and integrated in certain cases.

It would be interesting to find out what the Congress participants think of Malaysian culture now, 50 years later. The Policy tried to mould a “Malaysian” culture that was weighted by a specific Malay identity and bundled with Islamism. In the process, it eroded many of Malaysia’s other heritage traditions, such as the East Coast ritualistic performances of Mak Yong theatre, kuda kepang and wayang kulit. Did the Congress end up hurting the very thing it claimed to value?

“I was a guinea pig for the National Culture Policy,” said Khoo, who claimed to be the oldest among the panellists that night. “When I was growing up, my school had lots of competitions in theatre, music and such. When I entered Form 1, all of this became haram.”

The irony of a Culture Policy that specifically used the term “indigenous” to describe the type of culture it champions was its total disregard of the cultures of the many Orang Asli and Orang Asal people of Malaysia. During her turn, Yee gave everyone a reality check. “Semenanjung is only 39% of the Malaysian landmass, Malaysia is 61% in Borneo. In Sabah alone, we have 35 indigenous ethnic groups, 217 sub-ethnic groups. But we’re not part of the federal imagination of what constitutes Malaysia.

The models that she championed were those of the tamu, the community marketplaces that have been a Sabahan tradition since pre-colonial times, and the tikar, the woven mats that are a staple in many Malaysian homes. Tamu and tikar: two spaces where people commune, gather, cook, eat, work, exchange gossip, exchange goods, settle scores, get updates and generally experience all the varieties of human life together.

Some arts groups also saw the Congress as an opportunity to disavow the domination of Western influence in the local arts. Many of the nation’s most prominent artists and theatre practitioners at the time came from middle to upper class backgrounds, and had the privilege of receiving their artistic training from abroad (mainly Europe or America). The NCC cut through this lofty worldliness and forced cultural practitioners to consider what it really means to be Malaysian and to make Malaysian art.

For some Malay-Muslim artists, it was a rousing revelation. It pushed them out of their slump in the shadows of the West and into a unique Malay cultural modernity that they could claim for their own. It helped them deal with the alienation and displacement of modern life in the cities. In this new artistic sensibility, Islam became a familiar touchstone. Artists like Sulaiman Esa and Syed Ahmad Jamal made some of their most memorable work after the 1971 Cultural Congress.

But what does it really mean to be Malay? The great long con of Western colonialism is that its binary thinking of “us” vs “them” never really left the occupied territories, even after the colonists packed up and left. In their knee-jerk disavowal of the West, Malaysians fell into the same trap of essentialising what it means to be Malay. In this, a scholar named Abdul Hadi Haji-Hassan had been eminently influential. Faisal Tehrani recounted his story for the audience.

Abdul Hadi Haji-Hassan was a historian minted in the post-World War 1 era, and he pioneered the lumping-together of the various disparate tribes and ethnic communities living in British Malaya into a unified “Malay” identity. Previously, the Malays of Malaya were able to distinguish between themselves as Bugis, Javanese, Kelantanese, Acehnese, and such — but Abdul Hadi changed all that by writing their history as if they were a unified Malay race. If even the concept of the Malay race as we know it is a modern invention, then it stands to reason that the unifying bent of the National Cultural Congress was also a modern response, despite its gestures towards “tradition” and nativity.

Why are we still talking about this?

The National Cultural Congress sharpened an age-old internal conflict that plagues artists. Should artists be concerned with society or the nation when they’re creating art? Such preoccupations can sometimes result in propagandistic or sentimental art. But for others, like Sulaiman Esa or Syed Ahmad Jamal, the Culture Policy inspired them to move in a different direction.

Artists have to be smart about it. In his 1992 essay, “An Islamic Identity in Contemporary Malaysian Art,” on the Islamic trend in Malaysian art following the NCC, Sulaiman Esa himself wrote, “How can tradition be reappropriated and creatively interpreted so that it becomes the revitalising and catalytic agent that stimulates the production of dynamic, challenging and innovative works that are both relevant and meaningful to the time? … The real task is not to let tradition be a trap that would imprison our creativity, stifle our imagination, and suppress our drive for originality and innovativeness.”

Towards the end of the discussion, the panellists briefly discussed whether culture can be divorced from identity. But as the entire discussion showed, culture is identity. There is no possible way to talk about the cultures that are validated or those that are excluded without talking about the people who practice them. That culture forms identity is something Tun Abdul Razak understood very well when he convened the Congress. But at the same time, the Congress showed the power that art can have to mould society – not as propaganda, but in its attitudes and its drive for the new (even if the “new” is to be found in “tradition”).

In a way, any proposal for culture that has government sanction is a blessing in disguise for artists: it gives them something to rebel against. At the beginning of her talk, Yee stated outright: “I’m so bored of this topic. Can we move on?” And indeed, it is her transgressive and irreverent spirit that has made her one of Borneo’s – no, Malaysia’s – no, South-East Asia’s most respected and influential contemporary artists.

“National Cultural Congress: After 50 Years?” was an online discussion jointly hosted by CENDANA, Svara, and PUSAKA which took place on Aug 13. A recording of the discussion can be found here.