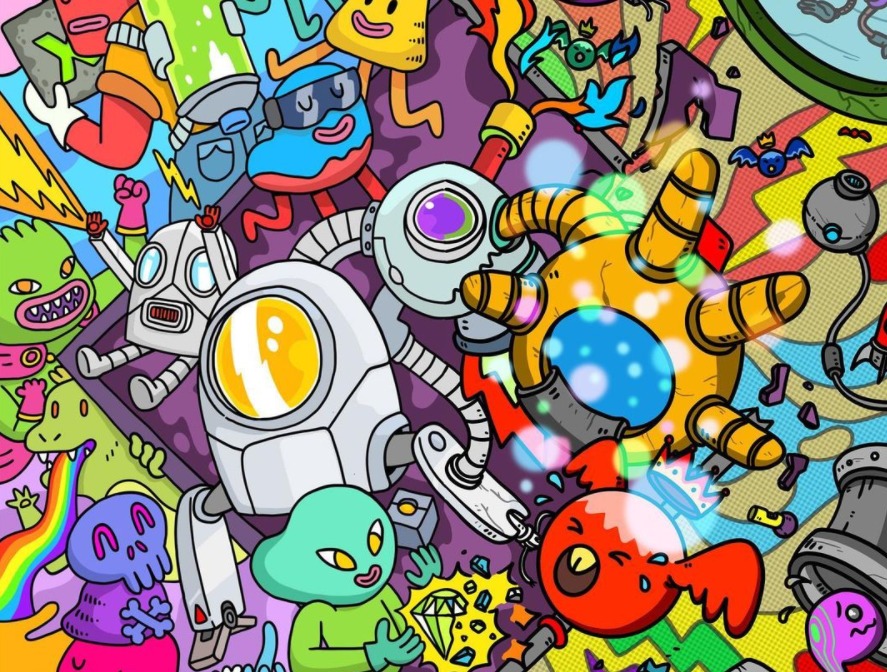 Enter the doodle swirlpool with Hizami Musa, Ann Jaafar, Sarah Salim and Amesab and gain some insight into how these artists 'conteng' their blues away.

Doodling looks simple enough to do, but can anyone doodle and call it art? I’ve been one to doodle on my exercise books and notepads throughout my schooling days, but have never felt like mine was “serious art”, or that I could do this for a living (I could never!). So I talked to a bunch of people who are doing it right, right now.

Full-time artist Hizami Musa – also known as Zami to his peers, students and fans – has been an art enthusiast for as long as he can remember. While studying for his diploma and degree in Graphic Design, he was able to explore the roots of art, and made a memorable discovery regarding Sumerian pictographs. “Doodling is not just art, it’s a communication tool,” he says. “Much like with pictographs, communication is possible through symbols. And I feel that doodling fits somewhere along those lines.”

Zami has been doodling since 2007 and back then, he would fill A4-sized sheets from edge to edge. Now, he draws on everything he can lay his hands on – caps, walls, you name it. Zami has led workshops, exhibitions and starred in doodling collaborations. The artist was also the face behind the Facebook community Doodict, where fellow Malaysian doodle addicts interacted and inspired one another with their art.

“Doodling to me is what you get when you draw spontaneously. I think anyone can doodle, it’s the simplest art form. It has no limitations.”

A pro in integrating fantasy with reality, Zami re-imagines casual scenarios with the addition of beasts, warriors and droids. Peer through his doodles and you’ll mostly see blob-like citizens and multi-shaped monsters taking the spotlight too. “I would say my doodling style is clean, with bold lines,” he explains.

This doodler gets his kick from watching cartoons like Adventure Time, Gravity Falls, Futurama and Spongebob Squarepants. “I loved watching Ninja Turtles when I was younger.”

As for tools, Zami says he likes using ivory card paper to doodle and permanent pens that create smooth lines. For digital drawings on his iPad, his go-to app is Adobe Fresco.

Zami’s take is that doodling can be therapeutic. “I discovered this a few years back – the moments when I truly doodled are when I’m stressed out. If I have to stay too long at a particular spot, I doodle,” he says. “I can spend an hour or two with just a pen and a piece of paper.”

Twenty-something Actuarial Science grad Ann Jaafar stumbled upon the art of doodling by accident. Having her student days jam-packed with figures and formulae, she would scribble herself into solace. “Whenever I felt tired or needed a way to release some tension, I would draw. I used to love just drawing monsters in random notebooks,” says Ann. If it weren’t for her friends’ constant nudging, she wouldn’t have posted her doodles on Instagram circa 2011 – which was the same year she began going viral for her quirky doodling. “When you receive great feedback for your artwork, you end up being determined to post and make more!” comments Ann.

Anyone who has seen Ann’s art on Instagram knows about her mysterious paper bag persona. Choosing not to reveal herself since she started gaining traction, the artist wears a grin-faced paper bag mask in her public photos. “I feel that I need privacy; it’s better for people to know my art rather than my face,” she comments.

Doodling is whatever you make it to be, according to Ann. “It’s like those times during school days when you would conteng your exercise books in class.”

Her doodling revolves around monster forms, food, plus everyday scenes and objects. “I love bringing inert things to life, as if they have eyes. The regular two-holed trash bins? They look like they already have eyes, so all you need is to draw a mouth to go with,” muses Ann. “Random people would see everyday objects with a character spark when they go about and spare a minute to tag me on them. ‘This reminds me of Ann Jaafar’, they’d say!”

Ann taught herself how to make stop motion videos for her doodles via YouTube videos. “I always want to learn something new. Right now, I’m familiarising with [the app] Procreate,” she says. Since getting herself an iPad, she has started producing more digital than hand-drawn creations. Otherwise, she says, “I like brown-paper sketchbooks, the thick ones. I also love black markers, not much a fan of coloured ones,” and cites her two favourite pens – the regular Sharpie and nifty ones you buy from Muji.

Like Zami Musa (who Ann is a fan of, by the way!) she has her go-to cartoons. The artist loves to watch reruns of Monsters Inc., Phineas and Ferb, Rugrats and Winnie The Pooh to name a few. “From watching cartoon monsters, I grew to love drawing them,” she notes, adding that it’s also cool to pay a little bit more attention to your surroundings. “See the clouds – what shape do they take? That’s a doodle prompt!”

“I don’t see myself as someone who draws well,” says Ann. “I draw how I like things to be. I do so because it’s a way for me to release stress, and it makes me happy.”

Familiar with the name Sarah Salim? Sarah has been doodling for The Star’s Lifestyle pages since 2016 and even has a colouring book to her name. “I began drawing when I was really young,” says Sarah, “But I did not know the word ‘doodle’ until a friend told me in 2011 about the Facebook group called Doodle Malaysia.” After that discovery, Sarah began to experiment with more patterns, shapes and creative options which then went on to define her artwork.

“However, I actually stopped drawing for about 10 years when I started to love my job in administration,” she says, “until I visited the Louvre during a trip to Europe.” Inundated with all sorts of art here, and in abundance, the flames of her creative spirit were reignited. “I came back to Malaysia, started to draw again and have never stopped!”

Although not a full-time artist, where there’s a will there’s often a way – she’ll pour her soul onto pages whenever time permits. “In the past, I would normally draw at midnight. These days I get tired easily after work, so I’d just spend time drawing on the weekends,” she admits.

Doodling for Sarah is straight-up conteng, or scribbling. “When I draw, I don’t plan,” says the doodler who cites artists Kerby Rosanes and Mr Doodle as her favourites. “If I feel like maybe drawing a flower, I’d of course start with the basic flower. Then, my hand would just go around and I’d start to create (random) patterns around it.” Everything makes up a cool harmony of simple shapes, designs and pattern repetition.

Her doodles are made  up of varied subjects – you’ll see faces of animals, famous people and plants – but Sarah usually has her signature twirls and waves tied to natural elements. She adds, “I like mandalas too. You can do a lot of things with them.”

Every one of Sarah’s works to this day, whether featured in the paper or uploaded on Instagram, is 100% hand-drawn. “I’m not good with digital drawing yet,” she jokes. “I use a drawing pen. If I want to add colours, I use markers and for bigger paintings, I use acrylic paints.”

Amir Sabri’s alias, Amesab, is tied to his personal branding initiative and artistic endeavour, Do Da Doodle (“Do the doodle!”). An architect before jumping into full-time artwork, his hands have been busy doodling since his university days. Surrounded by a bunch of creatives, Amesab went on an artistic journey in 2011. “I had a friend who could do portraits, also one who’s very good at using watercolours. I wanted to find out what I could do. What was it that I liked doing? I tried everything. Then I tried doodling and it stuck.”

One of Amesab’s earliest, most memorable doodle works was on his father’s old helmet, now clad in scribbles. He has since found out the beauty of personalising items by doodling on them. The artist has left his mark on his trusty phone holder first, then bookmarks, tumblers and tote bags. You might have even seen his illustrations of re-imagined Disney princesses in traditional wear. If you haven’t, here’s Pocahontas in Kadazandusun garb!

“Over 10 years, my style has changed a lot. My most current art uses only one line width each, as compared to my previous ones where I would mix thick and thin strokes,” he continues. Amesab says that his doodles are in 2D, flat but colourful. “My top doodling elements are flowers, robots and people.”

He now draws a lot with the app Procreate on his iPad. Before he owned the tablet, he used to hand-draw everything he needed and would scan them into his PC. “I used to draw on regular printing or cartridge papers. My favourite pen to use is the Artline 0.6-tip. The only drawback is it’s non-permanent, thus not waterproof. When water is in the way… everything blows up!” Amesab is currently experimenting with the sketch canvas too.

He draws prompts from songs and the cartoons he watches. His favourite flick? Doraemon! He’s also one to scroll through Pinterest for art ideas.

“I treat doodling as a way to vent my feelings,” he says. “It’s the same concept as writing in a diary or journal. It somehow alleviates the heaviness of what we feel inside.” For Amesab, it’s also a way to anchor himself in the present and be more mindful of what’s currently taking place.