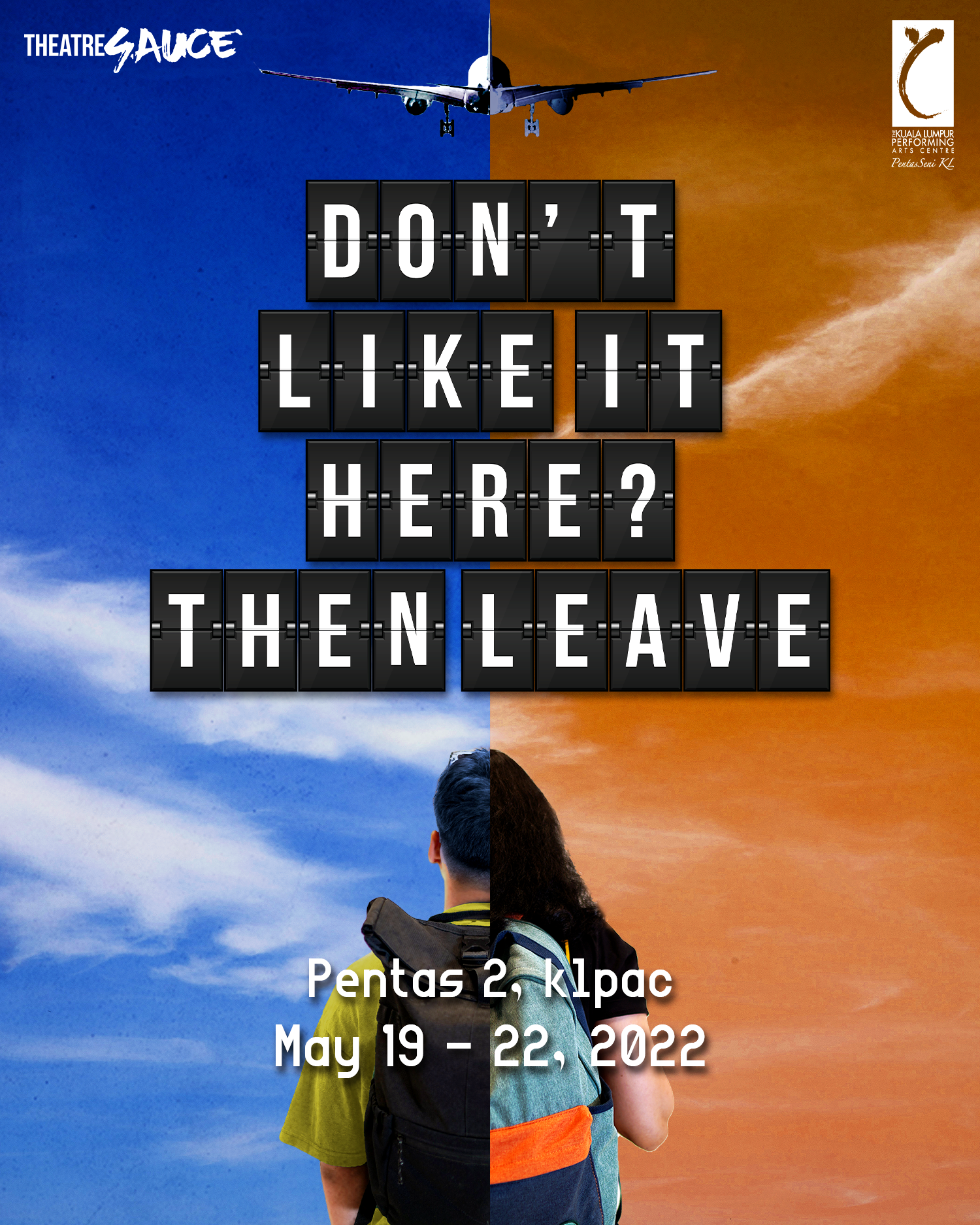 Theatresauce's latest production is its most ambitious yet, using an array of unique storytelling methods to explore themes of home and belonging.

Some people travel their whole lives in search of home. Yet some are born in it, and some die without ever seeing it. Of all of mankind’s needs, the need for a home is undoubtedly one of our most primal; there can be no caveman without a cave, after all. Don’t Like it Here? Then Leave (DLIH?TL) is Theatresauce’s latest and most ambitious project, born out of the cast and crew’s musings on home and the anxieties that surround the subject. The title of the production is a reference to the rather reductive saying commonly encountered by Malaysians who express concerns with home and country, and the work examines the validity of that rhetoric. Is the grass really greener on the other side? When does it make sense to leave?

“Home to me is where I feel secure and comfortable,” Kelvin Wong, director of DLIH?TL says. “Whenever I get the chance to go back for Chinese New Year, I feel secure in my grandparents’ place. I was in the States for four years, and for the most part I felt at home as well.”

Clearly, to Wong, home doesn’t have to be a singular place. His definition of home is surely one that many can agree on. While homes are built to shelter people from the dangers of the outside world, in this new age of technology, Wong does not think that homes even necessarily have to be physical and corporeal. Some people only feel at home in the digital world where they can be their most authentic selves. “Whether it is a digital space or a physical space, I think that really depends on circumstance.”

The impetus behind the creation of DLIH?TL was partly due to Wong’s imminent departure from Malaysia. He will be going to the United Kingdom to pursue his PhD, and that has been a source of many complex emotions for him, with excitement and dread mingling in his mind.

“I don’t look forward to going overseas. It’s different from 2012, when I was going to the States I was really excited. But having to go to the UK and start afresh, I imagine I would be quite miserable, because the idea of home there, that prospect is something that I don’t particularly feel safe or secure with right now. I have commitments over here now. But I’ve told myself one last time, go overseas and then come back for good. Despite the problems in our country, I’d rather be here, dealing with those problems rather than be in someone else’s country, dealing with theirs.

“The stories came together with the ensemble of six actors, and some stories came from our stage manager, some came from me. When we started, we shared a lot of stories and it developed from there,” Wong says, emphasizing the collaborative nature of writing DLIH?TL. “What do people regard as safe and secure? What do people regard as home? In our discussions among our creative team, we realised that some of us have lived with their parents forever, and they’ve never felt like they were home. And of course with the advent of the Internet, a lot of young people find safety and security in an online space.”

DLIH?TL is designed to resonate with millennials and Gen-Zs, as they are the ones more likely to struggle with the concept of home. Understanding his audience, Wong has opted for fresh, and perhaps even experimental ways of presenting the stories.

Wong says, “The pandemic has amplified the behaviours of younger people, giving them shorter attention spans, a heavier reliance on technology. We’re constantly on our phones, we’re constantly interacting with screens, and we can take in a lot of information at once. If we look at how social media operates, it takes into account all these things. Shorter attention spans means it’s just scroll, scroll, scroll, forever. Bearing in mind these things, how does that then affect the live experience in the theatre?”

There is a large array of storytelling approaches in DLIH?TL, among which are monologues, satire, expressive movement, and video recording. Real stories and fiction blend together, and at some points audiences are invited to interact and influence the show, either physically or through the usage of their phones.

“I would say that there are many things on stage happening at once for audiences to pick and choose from,” Wong says, elaborating on how his production addresses the traits of the younger, more fast-paced generation. “And at the same time, there is no one single narrative. We have a total of 18 different pieces within less than two hours. Some are just three minutes, done, boom, next. Very similar to how we scroll and take in information online. It’s made in a way that audiences don’t know what’s going to come up next. I find this format to be exciting.

“Nowdays, there’s a term called prosumer, which is a combination of the words ‘proactive’ and ‘consumer’. So we put ourselves in there, there’s a little participation element in social media today. We’re contributing our photos, our thoughts. I’m trying to replicate that over here. There’s a scene in which we show statements on the screen and we ask audiences if they agree with it or not. If they agree, they can turn on their phone lights and raise their hand. We also have an interactive ‘create a club’ section where we get audience members to choose lighting, music, and then we’ll transfer the whole place into a ‘club’,” Wong says. This is intended to not just increase engagement with the work, but also to foster a feeling of solidarity among the audience. “You might feel like you don’t have a home despite having a roof over your head. Check it out, the person next to you, or someone in the cast, actually feels the same way.”

DON’T LIKE IT HERE? THEN LEAVE runs from today, May 19 to 22 at klpac’s Pentas 2. Performances start at 8.30pm Thursday till Sunday, with additional weekend matinees at 3pm. Entry is RM48. Buy 3 Free 1 – that’s RM36 per ticket for a company of four. Each performance runs for about 80 minutes without intermission. FOR MATURE AUDIENCES. To purchase tickets and read more, visit the Cloudtix website.