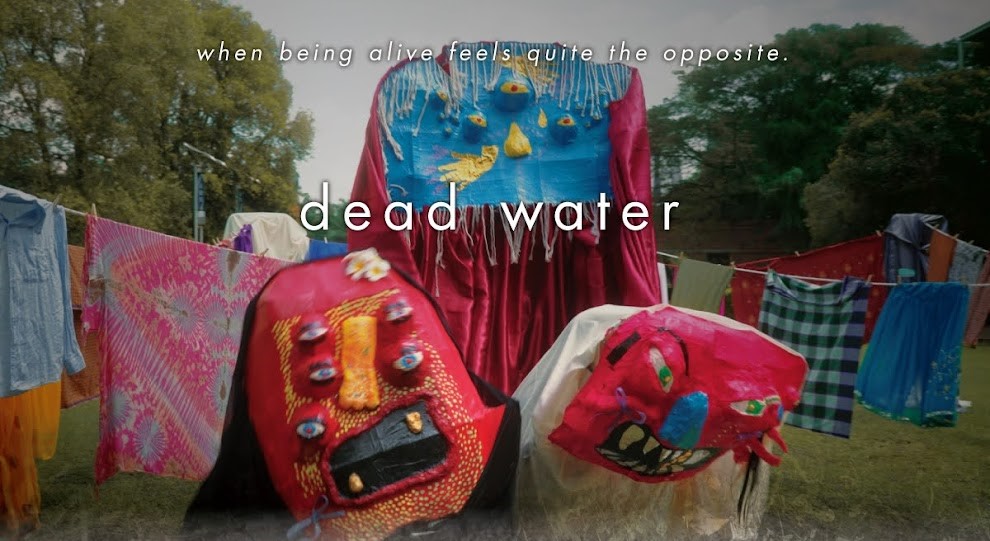 Dead Water is a avant-garde, multidisciplinary film which gives audiences plenty on which to ponder and interpret.

Emotion permeates every frame of Dead Water. Explosive rage, unbridled joy, deep self-loathing, crippling fear; almost every type of human emotion is showcased to the audience. This is achieved through a mix of expressive performances, striking imagery and atmospheric music that will leave audiences with food for thought as they try to make sense of and assign meaning to the symbolism in the film initiated by The Actors Studio Seni Teater Rakyat, The Kuala Lumpur Performing Arts Centre (klpac) and Hermana Collective.

Dead Water features performances by Chloe Tan, Ho Lee Ching, and Tung Jit Yang, all tied together by scenographer Yusman Mokhtar, videographer Ravin P, featuring music by the duo Francoe. Each artist was instrumental in producing a final result that exceeded the sum of its parts. Tan and Ho have expressed during the Q&A session during the in-person screening at klpac recently, that the project was born out of their frustrations and personal emotions during a period of stagnation and dissociation, themes that are sure to resonate with any of us who have felt the effects of the pandemic on our lives and careers.

The film begins with a scene where three dancers emerge painfully from plastic wrappings, likely meant to evoke cocoons or eggs. They stumble and totter around on shaky feet, much like newborns or newly-transformed butterflies. This scene, much like all the scenes that were to follow, left much up to the audience to interpret. I personally interpreted it as the pain an artist may have felt when forced into unexpected changes (such as nationwide lockdowns due to the pandemic), or perhaps as the pain and confusion a budding artist might feel when they first start out in the industry.

There are many other symbolism-laden scenes to be found throughout the piece. The three performers roll around in the dirt on the lawn. They first cringe in discomfort as they are sprayed with water, but later urgently splash themselves and pass handfuls of water to each other. When the water is later collected into plastic vessels, it stops flowing and becomes stagnant. In another scene, Tan claws at her own skin, tramples flowers underfoot, and later wears a mask of flowers as she dances, lost in emotion.

What could all of this mean? Is the water a metaphor for the creative essence that invigorates the novice artist, freeing her from the comfort zone that is the dirt from which life springs? The rush of inspiration is intoxicating at first for the beginner artists, and they urgently share their passions with each other, but things quickly become stale and stagnant once the water is placed in orderly, mass-produced vessels.

Is Tan’s flower mask an analogy for how some artists can lose their sense of identity in commercial success and a false facade they uphold for the masses? Flowers, after all, are customarily given to performers after a successful performance.

Most strikingly, in a surreal sequence, the characters don large, colourful masks that bring to mind childrens’ drawings of monsters. This was suggested by Ho to be a representation of our own dark sides that we fear facing – the monsters within each of us.

The dreamlike quality of a lot of these scenes also puts the audience in a state of mind where everything feels like it is stuck in a state of false reality, while the mind and body become disconnected from the world. As Tan and Ho said, dissociation.

Of course, it is possible that all of the meaning I have ascribed to the imagery in the film is completely off base. My interpretations are based largely on my own personal experiences in art and in life. The beauty of a film such as this is that it can deliver different impressions depending on who’s watching, and at what point in your life you watch it. This subjectivity is something acknowledged and embraced by the producers of the film. Ultimately, one must form their own personal conclusions.

For viewers who heavily prefer straightforward storytelling and clear answers to their questions, this might not be the right film for you; you may find the lack of clarity and logic frustrating. However, this will surely stimulate those looking for a work of art that works on more of an emotional level rather than a logical one. I, for one, will be looking forward to the next project from these artists.

Dead Water was screened at klpac on Jan 15 and 16, and will be streamed on CloudTheatre from Jan 20 to 23. Find out more and purchase your tickets here.