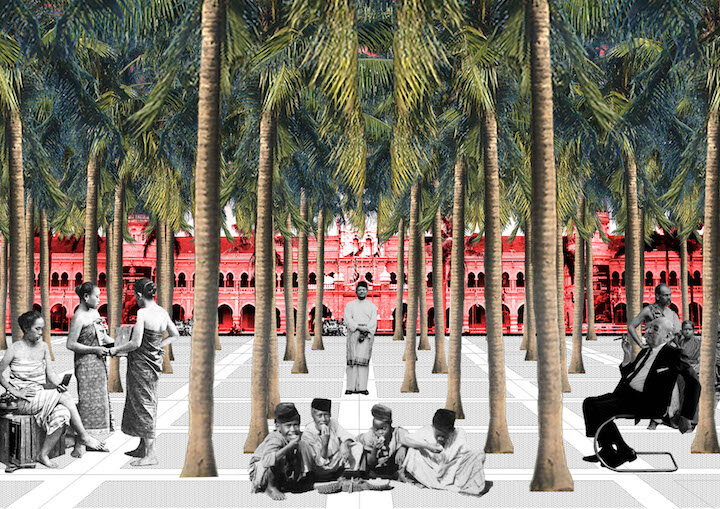 Copy / Paste / Displace are three actions I use on a daily basis as a designer. The familiar buttons of CTRL+C and CTRL+V are second nature, displacing vectors and rasters through our screens. Often times, the boundaries are scale-ness and floating until reconstructed by printing our creations into the physical realm.

The latest exhibition at The Backroom KL invites three designers, Amanda Gayle, Studio Karya (Ashran Bahari and Hazazi Hamzah) and No-To-Scale* (Shamin Sahrum and Nur Nadhrah), to test this overused dichotomy. Instead I will offer three unassuming terminologies: The Grid, The Orthographic Drawing and The Rendering. To add to the vocabulary of the exhibition title is to draw comparisons between design conventions and practice.

The grid is an obsession of designers. To lay out guidelines, “setting out” and organising space and proportions in relation to the extents of our drawings, printing, layout and more. All three contributing designers layout their pieces to a notion of form, space and order, but Amanda Gayle is particularly interested in applying the grid to test the collage process with her collected artefacts.

I find much more freedom in the grid, as opposed to working with more organic shapes/forms, because it allows for direction.

In the physical exhibition space, a long tapestry (Pyro, 2019) held gingerly by adhesives is laid carefully over two black steel frames. Traces of her collection, reassembled, adjusted, a traversing tessellation of textures and colours spilled onto the page. It reads as a layered document, delicate to the touch but extensively tells the tale of Gayle’s excavating through magazines, recycling drawers of print rooms and screenshots online. On the walls, each pinned print is a palimpsest of Gayle’s digital and analogue visual story, manipulated digitally filtering into a myriad of glitches and “happy accidents”.

Overlapping, disjointed and displaced, Gayle shares the process of assembling the artworks. The work encompasses organising the colours of the collected strips, physically weaving and adhering the individual cut-up strips before feeding the now long tapestry into an ink-jet printer by a process of scanning and printing. The experimentation process continues with chemicals and fading ink cartridges, resulting in bleeding and organic textures spilling between the carefully cut-out strips. The assemblage is then scanned and archived digitally before being dragged into photoshop for another round of collaging.

…as I got older I could never really bring myself to work on a blank canvas.

Orthographic drawings are used to represent a three dimensional space or object flattened to a two-dimensional medium, foregrounding the spatial qualities of a designed environment. Often a frustrating work-in-progress document with black lines on white A0 paper, both Studio Karya and Not-To-Scale* (both, collectives that are trained in and practise architecture) subvert the spatial readings by overlaying textures, people and icons. The artworks emerge as precious assemblages of moments. Viewers are invited, viewing the ground from up high, peering at the people below, the symbols and the moments of interaction between space and our rituals.

Studio Karya created two distinct series. The triptych, ‘The Screen 01’, spells out three scales articulating the same designs that are activated by characters moving between spaces, life spilling over the Islamic geometric triangle motifs adorned walls. ‘The Screen 02’ suggests the doorway leading into ‘The Screen 03’, which offers grandiose furniture with people dressed in regal robes.

Both Ashran and Hazazi teach architecture in tertiary institutions, working with youth to develop a visual language of testing conventions of the often rigid architectural drawing. The collages tell the tale of the life and politics of space, but still overlaid by a black line of the plan view (The Screen 03) to determine the built and unbuilt. The restrained and careful pieces offer a deep reconsideration of the conventions.

The use of a drawing is not only depicted through orthographic tools, but by collaging a scenario together. Rendering is the term used, defined as “the art of creating three-dimensional images”  or “architectural visualisation” often rely on additive collaging of foliage and furniture. No-To-Scale* and Studio Karya both create abstract worlds, informing a line of questioning rather than proposing a specific design outcome.

I asked Sam from No-To-Scale* why their work is positioned from a global lens, he began sharing their interests in cultural displacement by visual appropriation. The process of overlaying prominent figures of Malaysia onto works of the likes of El Lissitzky or a tribute to David Hockney instantly foregrounds commentary of our interconnected world. The ‘Chicago Convention Hall Repurposed’ addresses our shared global phenomenon of the pandemic, transforming the original modernist  concrete design by Mies van der Rohe to a make-shift COVID-19 hospital. To overlay the free plan with our current state of the world juxtaposes function and time, a reminder that architecture will always be confronted by the contentions of our everyday life.

The visualisation process now is tacked on as a messaging tool on social media. Previously only used to speculate and deliver a vision, Not-To-Scale* recognise the journalistic immediacy of creating reactionary imagery. The work on their Instagram account demands attention to the undercurrent movements in our contemporary life. The posts reach beyond transnational boundaries, to propose an unexpected connection, challenging our existing conceptions of the collage.