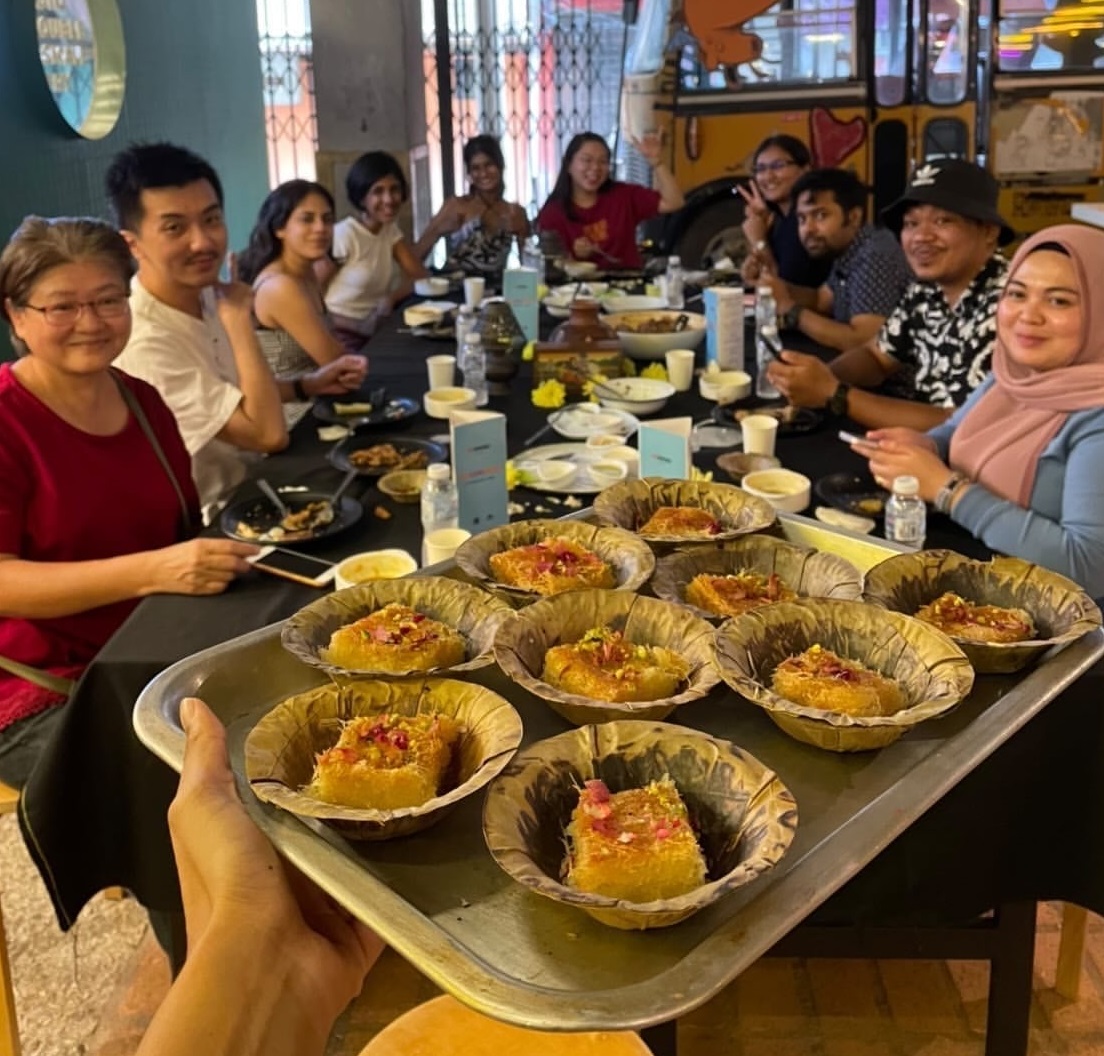 When I first walked into REXKL’s food hall, I panicked. Late last month, I was going to KLWKND’s The Long Table, an evening where one gets served a full course meal consisting of dishes from migrants and refugee communities that live in Kuala Lumpur.

I was expecting aromatic dishes filled with contrasts: sweet, tangy and savoury. Light crunches and heavy creamy delights. But what I was not expecting was to sit at a table with nine other people to share in this meal.

Perhaps I should have put two and two together.

The last to arrive, I squeezed into my seat right in the middle of the table. The beginning of the meal was… awkward. People who knew each other just chatted amongst themselves, bodies turned away from others. Those who came alone stared blankly at the dish laid out before them.

Thankfully, we were served a chilled homemade Limonana to give us something to do. A twist of lime and mint, it’s a drink found in several regions in the world, including the Middle East. At first, the initial taste of the drink was bitter, but once your tongue adjusted it became refreshing – a good remedy for my suddenly parched throat!

Tonight’s dinner was hosted by PichaEats in collaboration with REXKL, serving Burmese and Palestian dishes. PichaEats is a social enterprise that helps financially empower refugee communities using their culinary skills.

When it was time for starters, the co-founder of PichaEats Lim Yuet Kim announced what we would be eating for each course.

It was awkward at first, but as soon as the Lahpet Thoke, the green tea salad, and Middle Eastern platter for starters was served, suddenly everything changed.

Everyone seemed to have the urge to ask their stranger neighbours at the table: You look familiar, do I know you? And sharing little introductions while passing dishes around to share.

The Middle Eastern platter consisted of several light and zesty dips, Arabic bread and crudites. The pickled baby onion became a sweet and tart bubble in your mouth. The chickpea hummus was outshone by the labneh, a thick strained yoghurt, with its cheesy creamy texture that complemented the chewy bread.

However, the highlight of the appetisers was the Burmese green tea salad, which was made by the head of product development chef in PichaEats, Parimalar Devi. The chef had loved and remembered the tasty salad from her days of backpacking through Myanmar, and Parimalar felt the need to introduce it to fellow Malaysians to showcase the country’s cuisine.

The salad is a concoction of yellow onions, tomatoes, fermented green tea which is marinated by lime juice and oil. After marination, fried lentils, nuts, seeds, legumes and beans are added to the mix and layered onto a bed of cool shredded cabbage. This gives it full of crunch and the salad turns into a fiesta of flavours, and a refreshingly healthy meal.

The “main act” for tonight’s dinner was the Maqlooba by Palestian Chef Dalia. When Lim announced the dish, which literally means “upside down” in Arabic, she asked for a volunteer to flip the bowl onto a serving plate. After some giggles and polite “oh you can do it if you want” between guests, a mighty tower of layered rice, chicken and potatoes topped with cooked eggplant slices was revealed.

With the chef braising the chicken and rice, the Maqlooba resulted in an aromatic and ambrosial meal, in which you could taste the sweet spice of cinnamon, the warm woody taste of clove, the subtle bitterness of bay leaves.

One of the last tastes we had at The Long Table was Chef Dalia’s Kunafa. A Middle Eastern dessert made of shredded phyllo, a common Middle Eastern pastry dough, making it into a pastry that looked like a spun bird’s nest called kataifi.The kataifi is layered onto cheese and baked to become brown and crunchy whilst the cheese softens to be slightly gooey. Once baked, the kunafa is glazed with sugar and rose water syrup.

Adorned with a dried rose petal, the kunafa is served hot, and the cheese oozes over. The cooled-down version was easy to dig into, making it a nice palate change from the fragrant spices of all the previous dishes.

As the menu progressed, our conversations with the people sitting around the table became deeper. Slowly, each of us unfurled, sharing things: for me, it was surfing dreams and how I had made a big and unexpected move during the pandemic.

Like the layers of the Maqlooba, our meal together flipped each of us and revealed a bit of what was inside.

Leaving the night full, I felt some awe in how food had the ability to draw in people from such different backgrounds and convince them to sit around a table and share not just a meal, but conversation, and a part of their lives.

Compliments to the chefs, and The Long Table for an evening of flavour and connection.