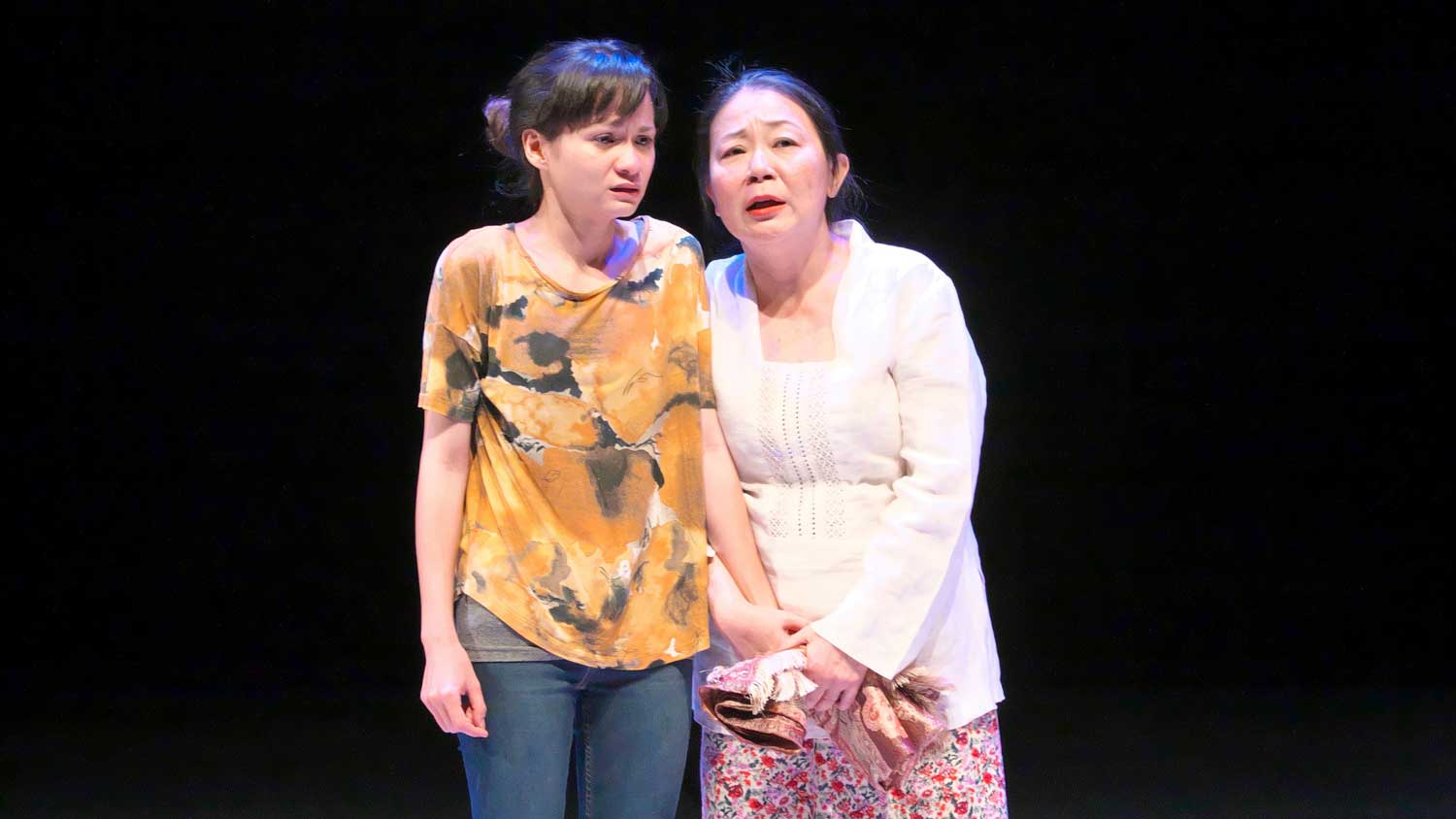 Nadirah, written in 2009 by acclaimed Singaporean-Malay playwright and poet Alfian Sa’At, has long been a critical darling, lauded for its witty and compassionate tackling of religion and multiculturalism in Singapore. I had the chance to watch a 2016 production staged in Tokyo by Instant Cafe Theatre, streamed online in October this year, and came away with mixed feelings, regrettably. While Nadirah is a captivating, witty play, and its value as a groundbreaking conversation-starter can’t be understated, it’s become clear that in 2020, the issues of interfaith relationships and religious conflict that Nadirah raises have come to require a much more thorough interrogation than the play provides.

Nadirah’s titular character is a devout woman studying in a Singaporean university, where she’s also the Vice-President of the Muslim Society. Born to a divorced couple—a Malaysian-Malay father and Singaporean-Chinese convert mother— Nadirah faces a crisis when she finds out her mother is planning to marry a non-Muslim man. Helping her navigate this are her senior Farouk, a reactionary conservative, and Maznah, her liberal, secular best friend. Both Farouk and Maznah clash over the advice they give Nadirah as she contemplates moving to Malaysia to be with her wealthy, Muslim father.

It’s an engaging premise, one that keeps you invested and excited to see where the play goes. Below the streaming window was a live chatbox, and it was abuzz with speculation and comments from the audience. Overall, responses were incredibly positive. Jo Kukathas directed this production, staged in Tokyo, and it’s marvelously-executed, its strengths shining even through an online stream. In fact, the live chat box and easy-to-access play information makes being an audience member a more intimate, collaborative experience. The plot moves along at an organic pace, neither dragging or rushing, and a big part of that is the cast’s snappy, fluid delivery of the material.

Sharifah Amani gives us a tense, tightrope-walking rendition of Nadirah, steering the character through a complex range of emotions—famously known as the star of Yasmin Ahmad’s Orked trilogy, it’s an ironic twist to see her play someone so opposed to an interfaith relationship, but this performance feels informed by her past experience and she lends a sympathetic quality to the character. Iedil Dzuhrie Alaudin’s Farouk is vigorous and menacing, propelled by his perception that Singapore’s Malay community needs unity in the face of cultural erosion. Farah Rani, who plays Maznah, seemed to be an audience favourite if the live comments were anything to go by. She’s magnetic, witty, and soulful, a nice counterpoint to the dogmatic influence of other characters.

However, it’s Neo Swee Lin and Patrick Teoh who steal the show. Respectively playing Nadirah’s mother and her partner Robert, Nadirah’s major dramatic question revolves around their relationship. Whenever they interact, we see sweet and genuine expressions of love that cut through the tension that surrounds them. They perfectly embody the subtle fears, hopes, and dreams of a pair of star-crossed lovers. Combined with a certain world-weariness that stems from both their past marriages, they are by far the most developed and compelling characters.

For all the skill of the directing and acting, however, it’s the script itself that falls short. The dialogue is well-written and personable, but the way it frames certain characters or scenarios seem to ignore larger issues. Take Maznah and her character arc, for example: as a liberal, secular Malaysian exchange student, she’s a thoroughly ‘Westernized’ woman who dresses differently, quotes Shakespeare, and has to have Muslim concepts explained to her. Perhaps this helps her serve as a surrogate for the audience, an opportunity to answer questions a non-Muslim viewer might have, but it seems divorced from the reality that there are many Malay people who, regardless of their personal religious beliefs, would be familiar with those cultural references by virtue of having been raised in Muslim communities. Instead, Nadirah reinforces the idea that a secular worldview implies a cultural betrayal along with the religious one, that being less religious somehow makes one more “Western” and less “Malay”. It doesn’t help that Maznah is constantly dismissed by Farouk and Nadirah until she becomes more religious herself, at which point they begin to listen to her more, even if it’s justified as a free choice she makes. It makes you consider how those who don’t adhere to specific religious traditions get excluded from the conversation, but in Maznah’s case, there isn’t a satisfying character arc that results from it.

In another confrontation between Robert and Farouk, they bond over football and come to understand their differing religious beliefs as being “supporters of different teams”, and Robert insists that in the end, they can find common ground in “the beautiful game”. While comforting to hear, it’s a decidedly superficial narrative that goes unquestioned, even as we witness a monologue from Nadirah’s mother detailing the fear that she would lose Nadirah after her divorce and the lengths she went through to be seen as a devout Muslim by the courts to keep custody of her daughter. The “beautiful game” metaphor also ignores the disturbing scenes where Nadirah breaks down over her mother’s revelation that she plans to register in a civil union with Robert, or her attempts to have her mother sign up for religiously-motivated Arabic lessons. Nadirah never really comes to terms with those actions, nor recognises them for what they are: a form of emotional abuse. Hard to imagine any sort of game whose outcome might risk your children or your relationships.

The inequality of power is pervasive everywhere in Nadirah, whether in the unique challenges faced by the women of the play, in the role of the state in enforcing religious rules, or in Singapore’s relationship with Islam. What forces drive Farouk to believe that Malay-Singaporeans desperately need a unifying banner? What does it mean to be Malay and secular, or Malay and religious for that matter? Questions like these are alluded to but never really engaged with, and while it’s honest, funny, and thoughtful, Nadirah’s charm tends to gloss over the subtleties of these issues, even as it tells a fascinating story of family drama. In a world where mothers really do lose their children to unilateral religious conversion, or where “Western values” is often used as a political dog-whistle to harm vulnerable communities, perhaps those questions need to be raised again and discussed much more rigorously. Nadirah is a good play, and it doesn’t suffer at all from being streamed online, but it also seems like a lost opportunity to have these conversations.

Another round of screenings for Nadirah, known as ‘Nadirah Encore, will be available on the Cloud Theatre platform on Nov 29, 2020. Tickets are priced on a “Pay-As-You-Like” basis, and are available here. Part of the proceeds will go towards COVID-19 relief efforts in Sabah.