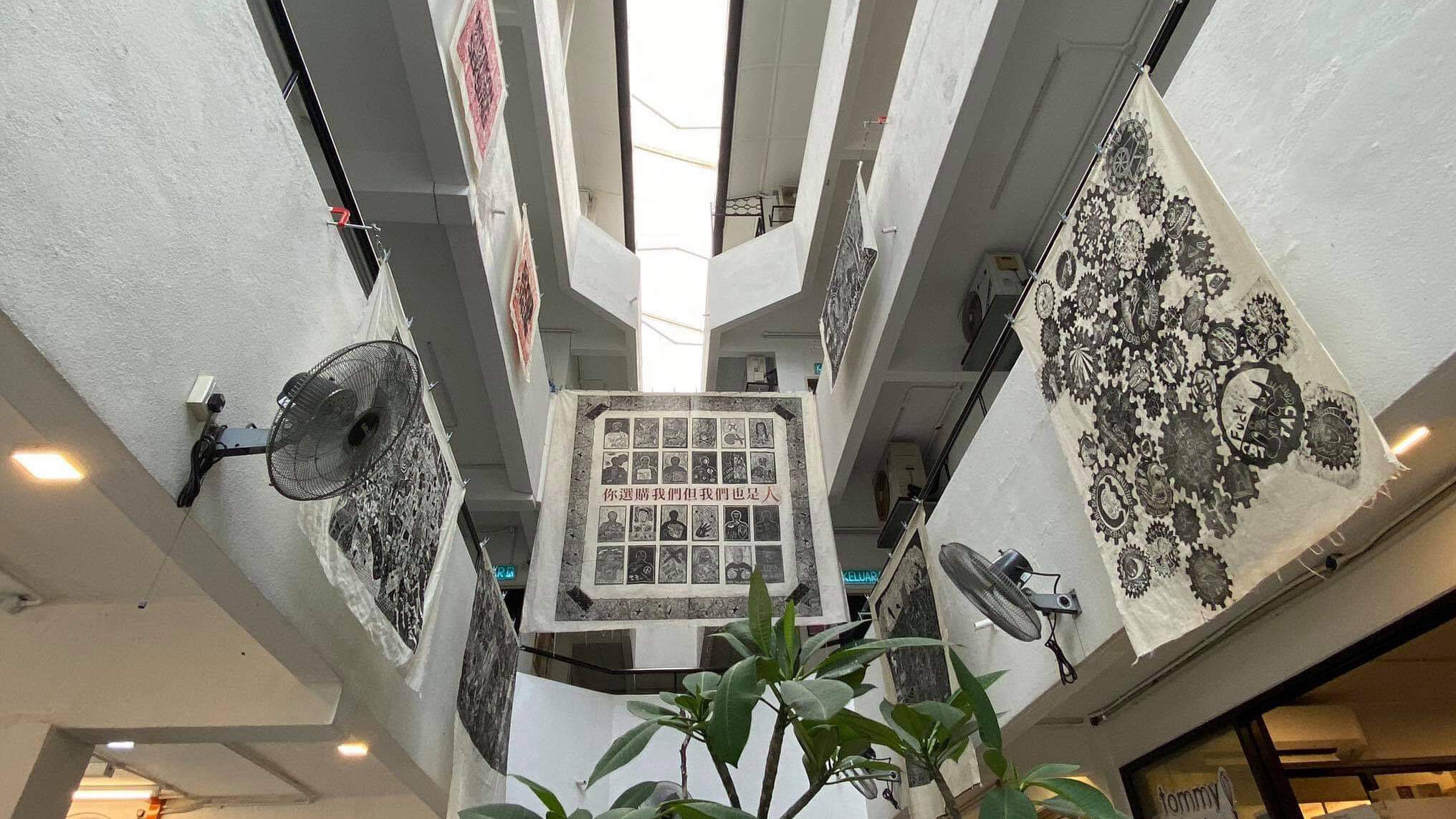 There’s something inherently rebellious about woodblock prints. It’s meeting the resistance of carving out an image into existence from unrelenting material. Scratching and gnawing its way out of negative space. It’s screaming a statement in bleeding, black ink.

Carving Reality: Contemporary Woodcut Exchange Exhibition from East Asia, curated by Krystie Ng, is art that aims to inspire action. The exhibition unites collectives across the region, from our neighbouring punk-print collectives in Indonesia like Marginal and Taring Padi, to the further-flung comrades in East Asia like A3BC from Tokyo, Print and Carve Department Taipei, Printhow Hong Kong, and closer to home Pangrok Sulap from Sabah.

Each group brings its own endemic issues from its localities. In Bayu Widodo’s “Private Land”, there’s the subtle iconography of a skeleton wearing a hat worn by 19th century bupati, or the Javanese landed aristocracy. Pangrok Sulap’s “ParLIARment” is an uncanny depiction of the chaotic conduct in the Malaysian parliament.

Yet brought together they are part of a whole, the exhibition thoughtfully ties together the undeniable interconnectedness of all these issues. The prints that populate the walls of the Backroom force the viewer to look at issues of gender, race and the environment, acknowledging their relationship with one another, as well as to corruption and post-colonial modernity. The proximities and similarities we are confronted with between all these works, despite their geographical separation, blends them into one another, threatening to rupture our preconceptions of borders. This dizzying network of relationships within the system we organize ourselves is cast as a wide-open net with an infinite number of holes we can fall into. Like the deep crevices that give shape to the woodblock, Carving Reality seeks to expose those deep chasms and cracks within our political systems.

There’s a famous anecdote about the painting Guernica. Picasso’s cubist, mural-sized nightmare-scape was the anti-war painting of the 20th century. A tapestry replica adorned the United Nations building in New York. When the US issued its statement declaring war on Iraq in 2003, it had the tapestry covered. The act of concealing the painting spoke volumes on the agency of images in calling out the hypocrisy of those in power.

Carving Reality’s display isn’t restricted to the walls of the Backroom, but is draped over the balconies that encase the main courtyard of the building. Although the statement made by the prints are no longer hidden like Guernica was, this brings to mind a distinctly post-modern twist on the insidious agency of these images.

As images of protest have entered the mainstream (think Che Guevara in his beret), they are not only popularised but in turn commoditised. Treated as symbols devoid of their initial aura, they have now become fashionable signs. Although this presenting of a certain social viewpoint has always existed, the scale and presentation has been accelerated by social media. It’s the ouroboros of post-modernism. Nothing is authentic, everything is a performance. Even authenticity can be construed as performative. What does an exhibition at an Instagram-able setting on protest art mean in our cynical, virtue-signalling times?

I guess one could draw the line that performance is valid when it incentivises real action. A lot of these collectives are part of the communities they serve. Pangrok Sulap, for example, was active during the hardest months of lockdown, using its art not only as a means to raise awareness but to raise funds as well. The real challenge is not posed at the art itself, but at the viewer, to see if their perspective on reality can truly be shaped by the art they see.

Carving Reality: Contemporary Woodcut Exchange Exhibition from East Asia was shown from Nov 6 to Dec 7 at The Backroom in The Zhongshan Building, 80A Jalan Rotan, Kampung Attap, Kuala Lumpur.

All images are courtesy of The Backroom’s official website.

Farah Dianputri is part of the CENDANA-ASWARA Arts Writing Mentorship 2020-2021.