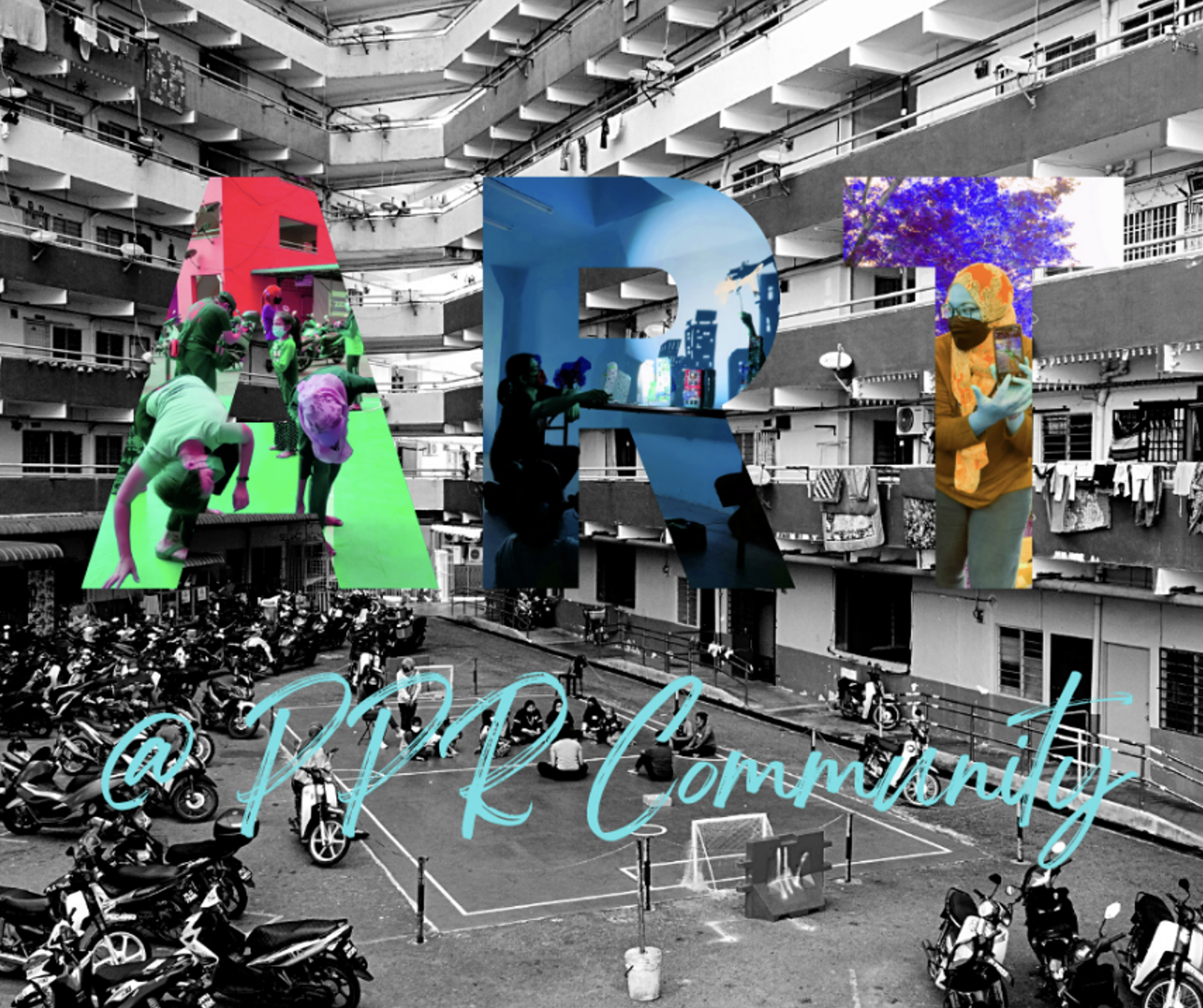 Arts-Ed, through its community-based arts and culture education programme, seeks to provide a platform for the youth in the PPR community in Penang through broad expressions of the arts.

“The arts are not for the privileged few, but for the many. Their place is not on the periphery of daily life, but at its centre. They should function not merely as another form of entertainment but, rather, should contribute significantly to our wellbeing and happiness.” – John D. Rockefeller, American philanthropist

Art is for everyone. But not everyone is born socially equal. Despite the fluidity and ubiquity of the arts, some social classes have limited or non-existent access to it, and this includes the B40 (bottom 40%) income group in Malaysia.

Sadly, much of arts programming focuses on the middle class and above. For the B40 households living in the PPR (Program Perumahan Rakyat, or People’s Housing Programme) community, the arts is about as elusive as urban expressions such as cryptocurrencies or the metaverse.

But one NPO (Non-Profit Organisation) in Penang aspires to change that perception, one community at a time. Arts-Ed, which started in 1999, has been engaging the local communities and developing capacity-building programmes for them using the various mediums of art.

“Art is a very powerful tool to highlight the issues within a community and to give a voice to a often-forgotten group of people. For Arts-Ed, that group of people is the youth,” said Chen Yoke Pin, Arts-Ed senior manager.

From 2012 to 2014, Arts-Ed initiated a community-based arts programme within the domain of a PPR in Sungai Pinang, Penang, to build awareness of the palpable issues around their living environment and to use the arts to explore solutions towards improving their liveability.

Chen said: “The potential of working with a community in the PPR context is immense. The output might not be significant in scale, but the long-term impact is remarkable. The group of children we worked with in Sungai Pinang Kita was originally disregarded by their own community. Their parents had given up on their future. But we did not.

“Throughout the three-year project, we tried our best, using the arts, to help the kids in building their self-confidence and for them to discover their identities within their community. I couldn’t be certain if it was a cause-effect situation, but I was very happy to know that three out of the 15 kids who were involved in the project went on to become undergraduates in universities.

“The rest of them are now engaged in their own businesses, or have a proper job. They have taken ownership of their lives. For a group of people who had been forsaken by their own people, they pulled an amazing comeback. And that’s what matters the most to Arts-Ed.”

After 2014, Arts-Ed took a hiatus from the PPR community to drive other programmes in George Town and schools around Penang, such as the Cultural Heritage Education Programme (CHEP), MyButterworth, as well as various cultural mapping exercises.

The idea of re-engaging the PPR community had always been at the back of Chen’s mind, but she was also mindful of their social and cultural development over the years.

It had to be done right for and by the community – and not just for the sake of nostalgia.

In 2021, Arts-Ed managed to acquire funding support from CENDANA via the PENJANA initiative to carry out a year-long Community-based Arts & Culture Education for Young Artists, Cultural Workers & Youths programme. It is the much-awaited homecoming for Chen and the team at Arts-Ed. Only this time around, they were going to do it differently.

“Our standard setup for a community project has always been within the context of a single-layer team. We have the operation and the facilitators moving together as one unit. Then we found out that there were younger artists out there who were keen to work together with the community.

Four mentors from different disciplines of the arts were enlisted, including Chen herself. The other three are Wong Hoy Cheong (visual artist and mentor team lead), Aida Redza (performing artist), and Tan Lay Heong (contemporary shadow play artist). By the end of the open-call recruitment for mentees, they accepted 11 Penang-based young artists. The initial target was eight.

From the get-go, Wong was very conscious about the notion of working with the community, particularly with younger artists aboard who might not be familiar with the environment. He was involved in the Gender Responsive and Participatory Budgeting (GRPB) in Penang, and he conceptualised the community participation model during the previous programme.

Wong shared this during the first training workshop with the mentees:

“Let us do no harm as opposed to doing good. Can we say, I will work in the community, and I want to make sure my work will not do harm. It might shift our way of thinking and how we want to approach work.”

Every space has its social identity and culture, including the Sungai Pinang PPR. Arts-Ed spent two months rebuilding the community’s trust and re-engaging with the community that they worked with in 2012 to 2014. They did extensive cultural mapping to understand the changes that had occurred and the behaviours of the current youths in that space. Fortunately, the local Resident Association was most helpful in providing insights into the space, as well as bridging the team with the adults as well as the youths.

The programme officially commenced on-site activities with youths in January 2022 after extensive groundwork. While the process remains fluid due to the pandemic and the fascinating behavioural landscape of the participants from the community, Chen remains optimistic towards the endgame of this programme.

“We did not empower the youths enough to take charge of their works and to continue building upon them in the previous round. So, we wanted to ensure that we can address that in the coming days.

“Arts can’t be the ultimate problem solver in a place laden with issues, but it can definitely open up doors and conversations – to talk about things that had been taken for granted for a long time. Eventually, we want to enable the youths to have their voices heard. Along the way, who knows – new paradigms or interpretations of the arts might arise from the youths here who have gone unnoticed by the society at large.

“But to be honest, we’re just very happy to be back with the community at Sungai Pinang PPR. Likewise, they are very excited to see us again.”