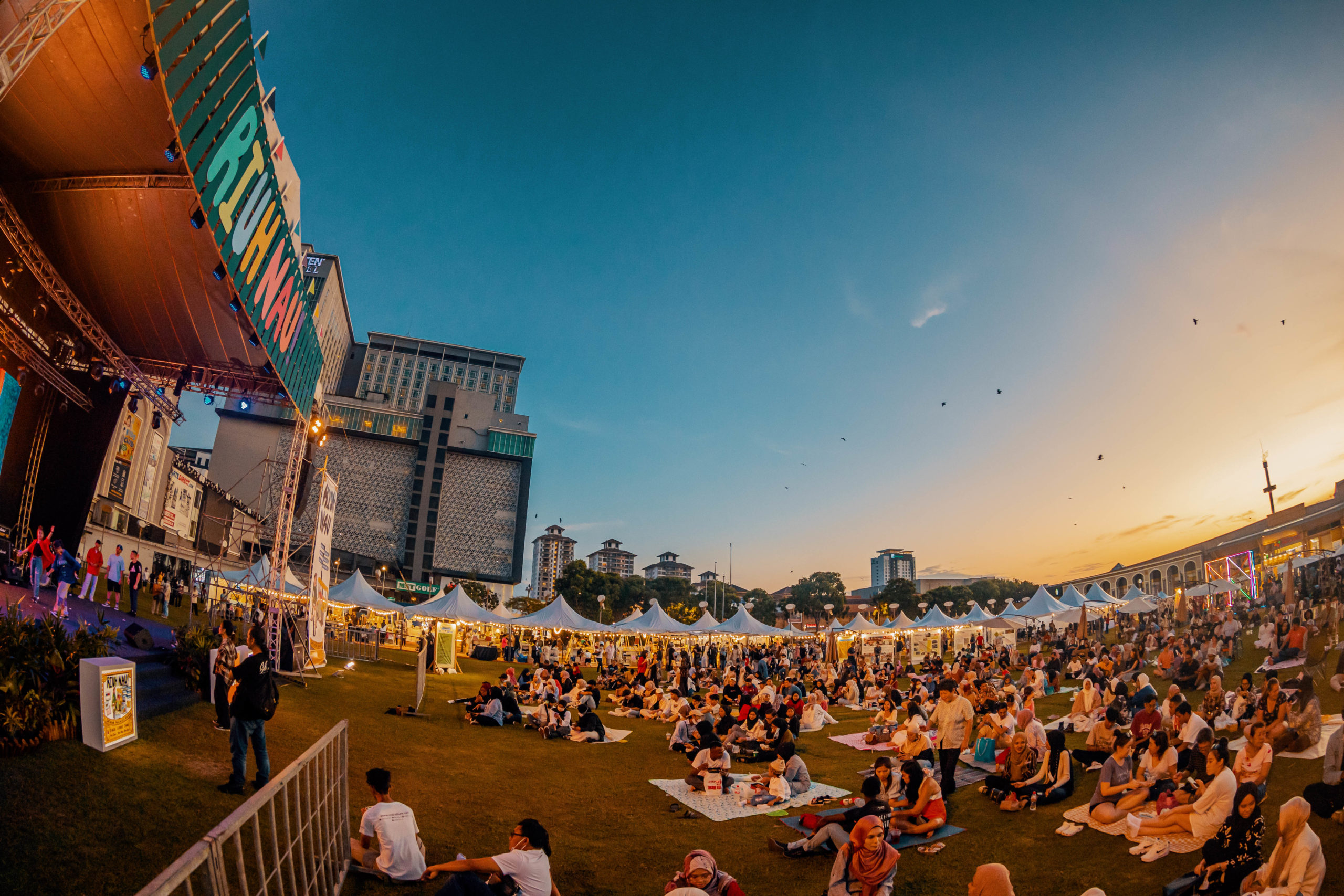 With over 15 workshops to choose from at Melaka's RIUH NAU!, there was no shortage of activities to both educate and entertain.

There are many ways to spend an idyllic weekend in Melaka, but there are likely few better ways to do so than at RIUH NAU! It was an event held at Dataran Pahlawan, Melaka from Aug 5 to 7 (Friday to Sunday), and drew in crowds of hundreds over its three days.

Natives of Kuala Lumpur would surely be familiar with the RIUH name, as Malaysia’s capital has played host to the RIUH festival countless times over the years. However, RIUH has recently started to expand to other states. This year alone, there was RIUH BAH! in Sabah, RIUH EK! in Johor, and RIUH X JAKM in Kelantan. RIUH NAU! managed to clear even the high bar set by its predecessors, welcoming over 32,000 visitors over its run of three days, solidifying it as the biggest RIUH event to date.

The incredible music performances from acts such as Amy Search, Ruffedge, Monoloque, and NYK, as well as traditional Malay, Portuguese, and Chetti dances were a big draw for the masses, not to mention the small army of retail, food and beverage vendors.

One aspect of the RIUH festivals that may get overlooked by some is the abundance of workshops that are free for the public to enjoy and educate themselves. Past RIUH festivals would usually have around five workshops, but RIUH NAU! boasted a staggering 15!

This writer managed to participate in three workshops on Sunday, namely the Pottery Workshop by Zen Ceramic, Kite Making Workshop by Chong Swee Ching, and the Gasing demo by Pendekar Gasing.

Zen Ceramic is a Melaka-based art and craft workshop and store that offers pottery workshops for children and adults. At RIUH, visitors had the chance to try their hand at pottery making and painting for free. Feeling adventurous, the BASKL team decided to take the plunge and make our own pottery from scratch.

The staff from Zen Ceramic first set up the pottery wheel, then placed a lump of clay on the wheel. After moistening our fingers with water, we then had to mould the clay by pinching, pressing and pulling it to the desired shape, all while the pottery wheel spun according to the speed we set using a leg-operated lever similar to the brake pedal in a car. It turned out to be a lot harder than it looked, although the staff assured us that it was normal if our first attempts did not end with a perfectly shaped ceramic vessel.

The level of precise control one must exert with one’s fingers to properly balance the symmetry of the clay while simultaneously pulling it up to form the shape of the pot was considerable. In fact, this writer’s attempt at a ceramic pot ended up with little more than a misshapen lump of clay, with hardly any distinguishable shape. Truly, it was beyond salvaging. Fortunately, other participants did seem to fare better!

We were not able to take back the questionable fruits of our labours because the freshly-formed pots, as with all kinds of ceramic products, had to go through a multi-day process of firing, glazing and painting. As we had limited time, we moved on to the next workshop.

Next up was the Kite Making Workshop by Chong Swee Ching. Chong and his staff guided us through the process. First, the paper was cut to form the familiar diamond shape of a simple kite. Then, two wooden sticks were crossed to form the framework to support the kite. These were fastened to the ends and centre of the kite using tape. The most exciting part was to create a design on wrapping paper that we would cut out and paste onto the kite to really personalise it.

This writer chose to cut out a little mouse deer to serve as the kite’s emblem, in the spirit of Melaka’s most famous animal. The only colour of wrapping paper given to us was a bright pink, but it suited the cute Sang Kancil well. After the mouse deer was pasted onto the kite, Chong poked holes in the kite, and used string to thread through and tie around the kite’s frame.

We would have loved to try out the kite on-site, but unfortunately, the fickle breeze at Dataran Pahlawan was not consistently strong enough to carry our little mouse deer into the sky. Perhaps another day at a park in Kuala Lumpur would prove to be more auspicious for our maiden flight.

The final workshop this writer attended was the Gasing demo by Pendekar Gasing. Being a city boy born in the mid-1990s, this writer has had no experience whatsoever with the gasing. The proprietor patiently explained how to coil the string around the gasing, how to grip it in hand, and finally how to throw the gasing in a way that caused it to hit the ground spinning.

Just a few quick facts: if you’re right-handed, you coil the string around the gasing in an anticlockwise manner; there is a male and a female way to throw the gasing, with the male form it looks slightly akin to a downwards frisbee throw, and the female throw has more in common with releasing a bowling ball.

Being woefully undexterous, I could only manage to consistently stick the female throw, with the male throw more often than not resulting in the gasing skidding across the play area and striking some unfortunate person on the ankle.

Nevertheless, it was extremely entertaining and even heartwarming to see people of all ages and races participate in this workshop, laughing together as they launched their gasing. Some of the children, who looked to be primary-school aged, were skillful enough to balance the spinning gasing on the tips of their fingers.

After all the workshops were done, it felt amazing to relax on the grass and enjoy the rest of the performances as the night drew to a close. Here’s to hoping that RIUH will continue to outdo themselves in subsequent festivals, and continue to bring happiness to Malaysians throughout the country for years to come.