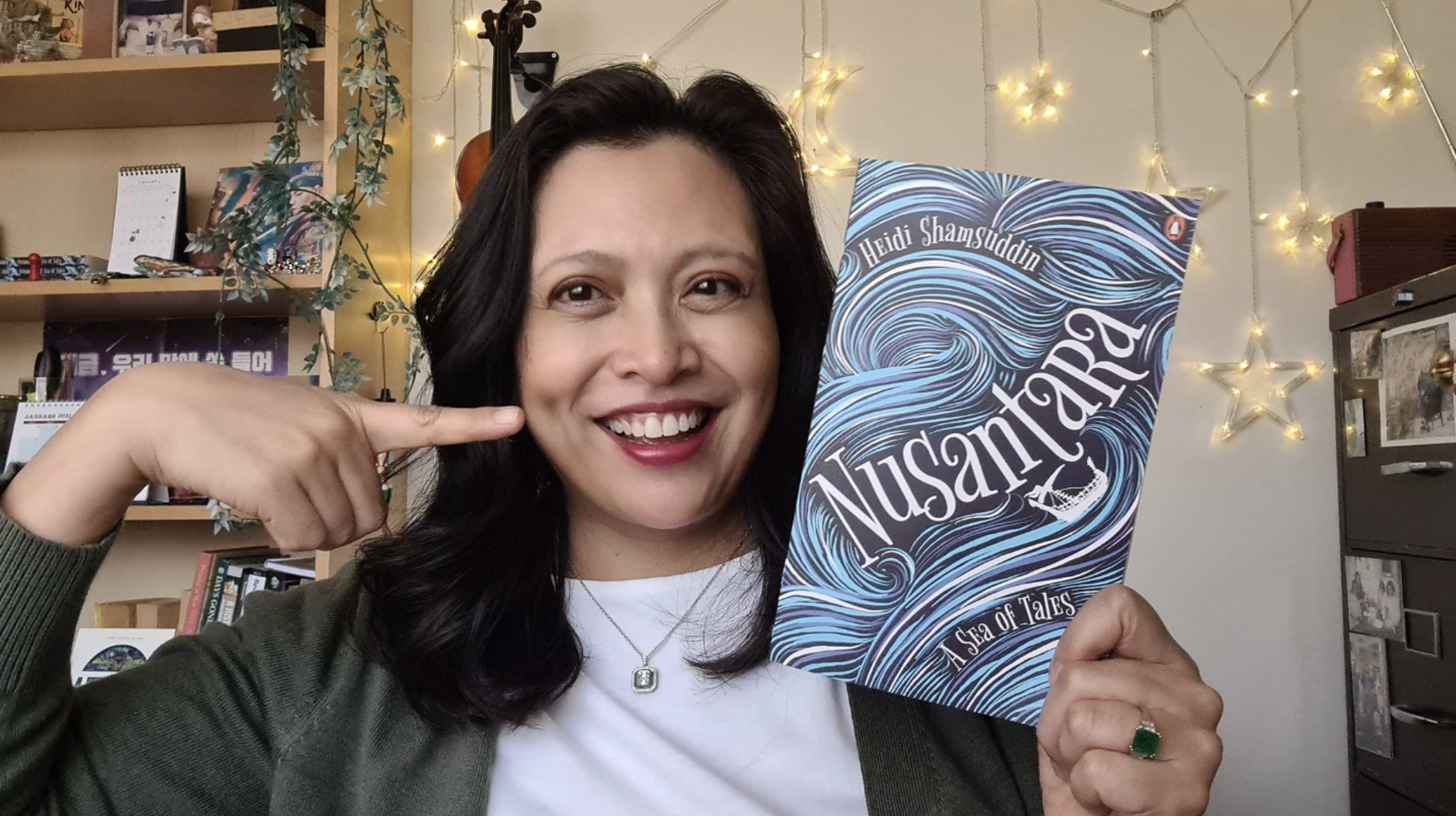 Heidi Shamsuddin’s newest anthology offers some retellings and deeper insights of beloved folk stories gathered from Malaysia and across the Nusantara region.

A crafty mouse deer tricks his way across a river by hopping over the heads of hungry crocodiles. A woman’s innocence is proven when her unjust death results in a curse that befalls the island of Langkawi for seven generations. A wandering sultan decides to name his newfound kingdom after the Malacca tree under which he takes shelter.

If these stories sound familiar, chances are you’ve read or heard some of the folk tales that make up Malaysia’s rich culture of storytelling. Now these stories and plenty more can be found in Heidi Shamsuddin’s anthology Nusantara: A Sea of Tales.

Following the success of her children’s book The Malay Tale of the Pig King in 2020 (which retells the Indonesian tale of Hikayat Raja Babi), Heidi returns to her passion of telling fairy tales from South-East Asia. This compilation initially began as a project for the award-winning author, having gathered local myths and folk stories with the aim of spreading these tales to a wider audience.

Most of the tales here are from Malaysia, with some hidden gems originating from the ethnic tribes of Sabah and Sarawak. However, as the title suggests, there are also stories included from across the Nusantara region, such as Singapore, Indonesia, Thailand, the Philippines and Vietnam. The richness of these tales can be found in the detailed retelling of the narratives, with an afterthought provided to establish a deeper context.

Of shapeshifters, enchantments and curses

The 61 stories in this anthology are arranged based on shared tropes, with most of the entries classified as fairy tales. While still containing local elements, these tales can also be analysed in the same manner as those written by the Brothers Grimm and Hans Christian Andersen.

Some recurring tropes include shapeshifters who can change into other creatures, trials or challenges that the protagonist must take to prove one’s worth, and of course, the ending that resolves in a “happily ever after”. There is usually a wise helper in these stories, sometimes depicted as an old woman, who helps the protagonists and rewards their kind behaviour. Readers may draw similarities with the fairy godmother from Cinderella, but the wise woman’s nature of punishing those who disobey her can also be compared to the witch Baba Yaga in Russian folklore.

In summary, good deeds are rewarded, while heinous crimes are often punished in a violent manner. It is the latter which tends to leave a greater impact, making these stories almost a precursor to watching horror movies. There are also several tales here that deal with the theme of curses, often seen as divine intervention meant to punish the wicked.

For instance, Si Tanggang tells the story of an unfilial son who refuses to acknowledge his poor parents. His heartbroken mother seeks retribution, resulting in a storm that sinks Si Tanggang’s ship as his body turns into stone. The afterthought also mentions that this tale has different variations throughout South-East Asia as explanations for how certain rock formations came to be, such as Batu Caves, Supirak Island from Sabah, or even Batu Malin Kundang in Indonesia. Despite the different versions, the moral of this story still remains clear: children should be filial to their parents, or suffer the consequences.

Mouse deer and tigers and snakes, oh my!

Of course, no collection of Malaysian folk tales is complete without mentioning the classic stories of Sang Kancil. This wise and crafty mouse deer’s ability to escape dangerous situations by tricking others has made him a beloved character in our folklore, even appearing in cartoons and animated films. While there may be plenty of local tales that focus on wits and clever plans, no other character has come close to achieving the status of the trickster archetype, and the Sang Kancil tales in this anthology show how much the mouse deer has become a part of our culture.

It goes without saying that Malaysia’s animal stories are just as rich and detailed as those from Aesop’s fables, perhaps even surpassing the stereotypes featured in European folklore and fairy tales. Our version of the big bad wolf can be found here in Sang Harimau the tiger, who is portrayed as a dangerous predator with a need to satisfy his hunger at all costs. There are even stories of humans who can turn into weretigers (or harimau jadian) by wearing the skin of a tiger, much like the werewolves of Western legends.

Crocodiles and snakes in folklore tend to get a bad reputation, yet in this anthology, these reptiles are cast in a more positive light. The Tale of Man and Crocodile is told in two parts, with the first half explaining the tragic origin of were-crocodiles, while the second half tells us how man and crocodile became sworn enemies. Meanwhile, a group of snakes rescues an abandoned baby prince in the mountains and helps him reclaim his kingdom in The Snake King of Antah Berantah.

How the world came to be

Rounding up this collection are myths about the origins of places or why certain cultural practises have been adapted. The beauty of myths is that these are stories passed down with elements of magic and fantasy, all while attempting to provide a reason behind the occurrences of natural phenomena or how customs came into practice.

Like fairy tales, myths across different nations can be compared in order to identify recurring storylines. While The Origins of Akinabalu tells of how Mount Kinabalu came to be, this story struck me as being similar to the Greek myth of creation. In both versions, the first two beings are born from the cosmic darkness, with the man eventually creating the heavens, while the woman shapes the earth below. There are other myths waiting to be discovered, such as the formation of the islands of Langkawi (caused by an all-out brawl between two giant families) and the origins of Tasik Dayang Bunting, which is said to have magical properties in helping women bear children.

Why we still need our fairy tales

Some of the tales in this collection may be familiar, but most will be new and eye-opening, as I discovered while reading these stories for the first time. While returning to Si Tanggang, there is an underlying theme I found in this particular tale that also surmises this collection’s subtle purpose: the need to acknowledge and take pride in one’s roots.

Much like Si Tanggang who rejects his heritage for better opportunities, it is easy to overlook our folklore in favour of well-known fairy tales from other countries. In fact, this has been proven with the endless reimagining of classical myths and fairy tales embedded within pop culture today, ranging from young adult fiction to video games and blockbuster films.

Even in this renaissance era of retellings, it is important to remember and cherish our own stories. If history is a chronological progression of events, then myths, folktales and fairy tales can be seen as the history of stories passed down from one generation to the next.

After all, our local stories have just as much value as the Western fairy tales we love, with lessons to be learned and plenty of magic to stir one’s imagination.

Nusantara: A Sea of Tales is published by Penguin Random House SEA. You can also listen to some of the tales in this book as told by Heidi on her YouTube channel (Heidi Shamsuddin).