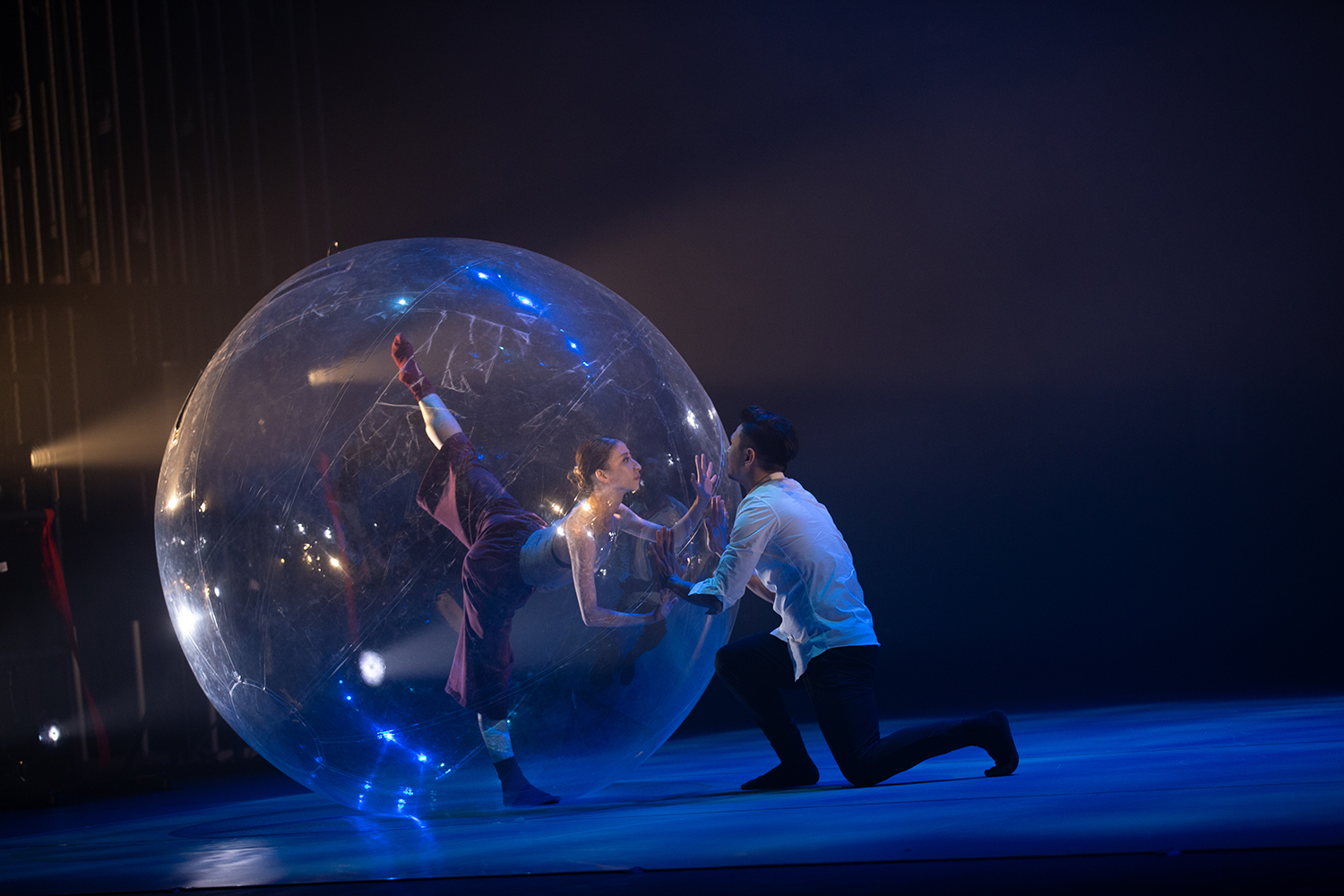 Mixed Bill of Dance Works was a collaboration between Asia Ballet Academy and Kenny Shim Dance Collective that allowed one to enjoy different genres of dance, and potentially explore where your interest lay.

By WILLIAM CHEW for Lensa Seni | Photos by Parkcity Studio

As the title suggests, the Mix Bill of Dance Workds by Asia Ballet Academy and Kenny Shim Dance Collective contained a mixed bag of works between two groups of dancers, the students at Asia Ballet Academy (ABA) founded by Ivy Chung and Kenny Shim Dance Collective (KSDC), a group of young contemporary dancers lead by Kenny Shim. The collaboration allowed the students a chance to perform with experienced dancers and in a genre different to their own.

Timing it for the new year, the show was held from Dec 31 to Jan 2 at the Petaling Jaya Performing Arts Centre and attracted a diverse crowd from families with primary school kids to young adults.

The show started off with the ABA students performing a re-staging of a ballet piece titled Paquita. This was a showcase of the student’s work to their parents and friends. Sweet violin melodies, bouncy accompaniment and a projection of a French ballroom on the backdrop set up the innocent fairy tale atmosphere. Cheers and applause from the audiences added a festive mood and also helped with identifying interesting moments in the performance.

Sacha, the second piece was a production by Shim first performed in 2017 under DPAC’s D’Next Artist Project. The work began with an air of tribal ritual. A dancer stood in centre stage surrounded by a group of dancers lying on the floor heads pointing towards the centre. Four other dancers stood in four corners of the stage where lighting was dim, all of them dressed in black. The imagery reminded me of prehistoric stone circles, shrouded in mystery.

As the percussive tribal music came on, the dancers broke out, repeating phrases of movements in short bursts, each with staggered timing adding to the chaos of the scene. One phrase involved raising their hands up high and quickly pulling them down to the stomach, throwing their heads forward and lifting up their hair. Others involved some high kicks or swiftly traversing a short distance across stage.

Lights at the front of the stage cast the shadows of the dancers onto the backdrop, doubling and enlarging the visual movements and evoking a sense of dancing around a campfire with shadows moving along to the flickers of the flame.

At some point, all but one dancer fell to the ground and the music stopped. Then came a moment of surprise when the soloist stomped her foot on the ground repeatedly and then layered it by clapping one hand onto her body, as if using her body as a healing musical instrument to revive the other tribeswomen. Even without understanding the whole narrative, this section was captivating in some otherworldly way.

FlightWorks, also by Shim, explored ideas of freedom and flight, and maybe even implied a sense of restriction. To be free from what? To fly from where? The opening was a multi-sensory attack with flashing strobe lights, and all sorts of musical instruments meshed together, loud and clashing. The dancers were mostly women, dressed in a lively turquoise and tightfitting top highlighting their torso’s movement but also leading our eyes to the wrist where the colours of skin and fabric are most contrasting. The stripe on the out seam of their skin-coloured pants added a slight aerobatic flair, like the trails of a formation aircraft. In their uniform attire, they were scattered and danced to their own pace for a minute or two. Then it stopped. And everyone walked away casually, as if nothing happened. A thrilling start but also confusing.

The follow up was a much lower energy dance between three members from KSDC, Amirah Redza, James Kan, and Steve Goh. The music shifted between phrases of flowery hopefulness and underlying tension whilst the dancers play and fight like birds in the sky. The dancers would quite often have their arms and head thrown backwards in combination with an arching their backs forwards or sideways, their wrist, hands and fingers also continued or accentuated the curve of the whole arm.  Arriving at a pose from an equally dynamic one smoothly but quickly was no easy feat, and there were many instances of such moments throughout this piece, perhaps exploring the limits and restrictions of the human body. Overall, it was an energetic piece with plenty to offer for those who were able to appreciate the technicalities.

Choreographed by Ivy Chung, Butterfly Lovers was a contemporary reinterpretation of the ancient folktale. By following the structure of the violin concerto, the general narrative was broken down into a series of acts that allowed multiple stories of the pandemic to be told. However, there was also a risk of fitting too many ideas into one piece.

Costumes and choreography both pointed towards a real mix between styles here. The opening featured a dancer in black top and bottom with a white wireframe of a skirt that had the shape and flow of a traditional dress. She sat at the edge of the stage throwing paper planes at the audience with the playful feminine poses seen in Chinese Operas.

The scene then shifted to an all-girl group in high school uniform, each one paired with an Ikea table and spaced equally apart, unambiguously signalling the pandemic. But the act managed to retain a certain freshness by exploring the bodily relationships we can have with a simple table. Moving around it, standing above, hiding beneath, flipping it on its side, all these moves were executed with a sense of liveliness. Later on, however, it is followed by expressions of fragility and the seeking of comfort by pairing two dancers to navigate around one table, finding the presence of each other.

The middle section was dedicated to celebrating the hardship of the students, and appreciation towards parental support, which they all deserve. However, the lengthy video projection of their zoom classes might have been a bit much for the non-parents in the crowd.

Towards the end, the acts included two duets of lovers in isolation and group works on hope and anxiety. While they were able to draw connections between the folktale and current crisis, they struggled to relate to one another in their narratives or provide a novel commentary on the pandemic. However, props, lighting and costumes were treated with care. Particularly when a huge sheet of veil was pulled back and forth above the audience’s head, lit by a blue light coming from backstage, making a trancelike visual spectacle.

The difference in style and maturity between the performances might have seemed jarring, but it allowed the young dancers and audiences mostly between lower primary school to secondary school to be more exposed to the world of contemporary dance. But also, for those who were new to dance, the show gave one a taste of the different genres and may have helped one explore where their interest lies.