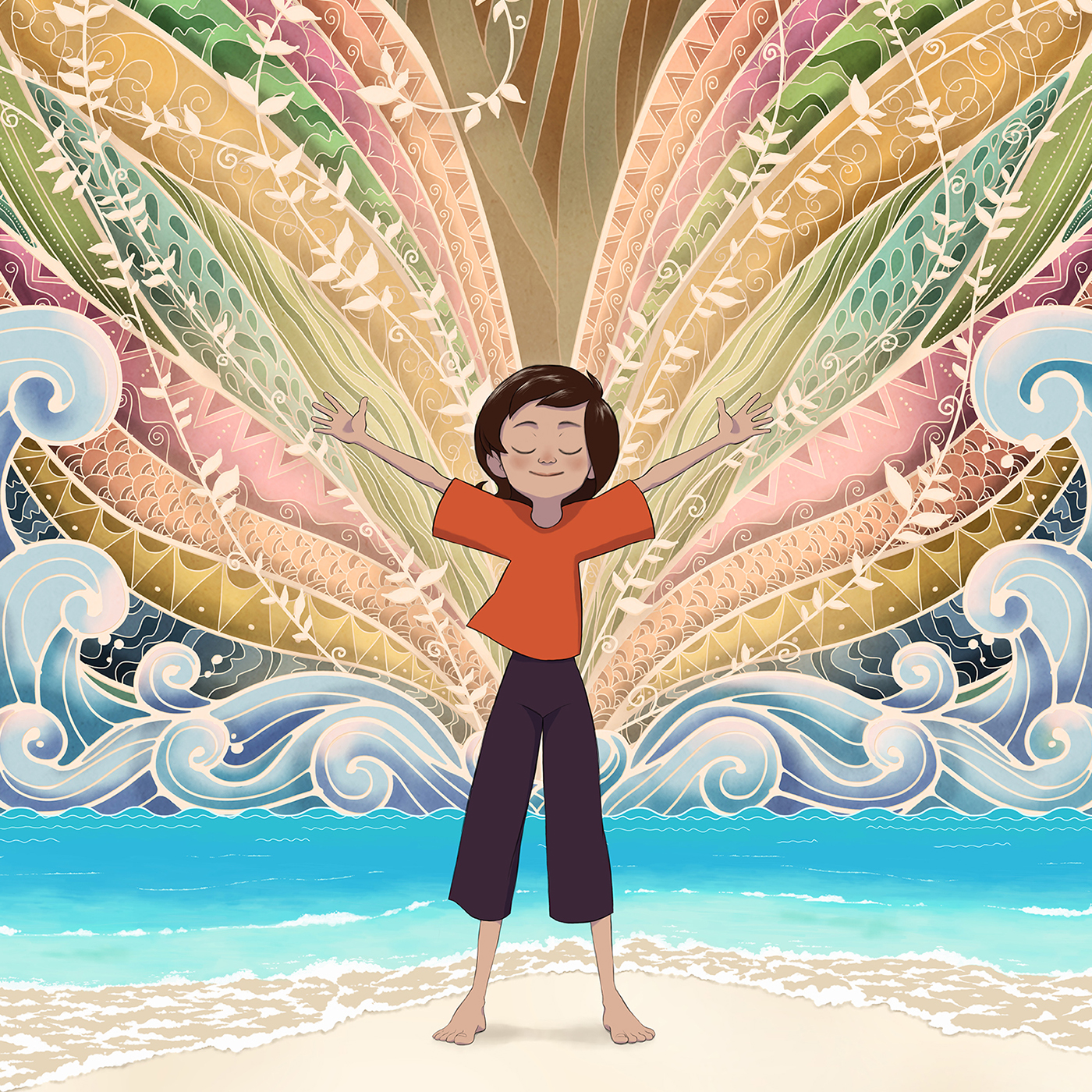 Through its first venture into animated short films, The R&D Studio brings visuals and music to life while incorporating the beauty of Malaysian art.

The animation industry in Malaysia has seen a rise in popularity in recent years, appealing to audiences across the globe. From its humble beginnings in 1983 with a series of hand-drawn Sang Kancil films, to the present computer-animated franchises such as Upin & Ipin and BoBoiBoy, Malaysian animations continue to tell heartfelt stories while never losing sight of the local culture which resonates with Malaysians everywhere.

With its first venture into animated films, The R&D Studio proved it was able to push the boundaries of Malaysian animation. Perhaps best known for producing Wizards of Warna Walk, Malaysia’s first long-running sitcom for Disney Channel Asia, this animation studio released Batik Girl in 2018, a short tale which combines the beautiful visuals of batik with a poignant tale about grief and coping with loss.

Following Batik Girl’s immense success, having premiered in 17 different countries, and having been officially selected for 28 international film festivals and winning several awards, The R&D Studio struck gold once more in 2020 with The Dalang’s Tale, which has also garnered international acclaim.

While attending the KLWKND “Art of Film: Shorts” event in November 2021, viewers were treated to a screening of the short films, and the chance to chat with director Irwan Junaidy as he provided an insight into the process of animation. Both films can be watched as standalone pieces, but getting to see them played back-to-back, I also discovered a cohesive style of aesthetics and themes that connects these films on a deeper level.

Batik Girl begins with a young girl living a carefree life, drawing pictures in the sand and surrounded by her loving parents. Her happiness is cut short by a sudden tragedy, leaving the girl to be taken in by her grandmother. The film’s use of bright colours at the start are now reduced to dull hues, shifting the atmosphere to a sombre tone, representing the girl’s loss.

Whilst dealing with her grief, she discovers the art of hand-painting batik through her grandmother. This process is shown through detailed shots of drawing patterns onto cloth using melted wax lines, before filling in the spaces with paint. Here, the display of colours seems to return to its earlier brighter hues.

The story then shifts from the real world into a magical one created by the drawings inside the batik. The titular batik girl comes to life as she fills the empty spaces with vibrant colours. The animation takes on a simpler style, yet tells its own story through the world of tropical rainforests and coastal seas as we see her exploring her new-found surroundings.

Along the way, the batik girl is stalked by a shadowy figure – a creature made from a spot of wax left behind by the girl in the real world. Eventually, both the girl and her batik counterpart learn to fill the emptiness in their lives with someone close to them – the grandmother and the shadowy creature respectively. Like the bond between the girl and her grandmother, in the process of making batik, bright colours and solid wax lines can combine to create something more breathtaking and meaningful.

The Dalang’s Tale is a shorter film at about five minutes, and takes on a traditional hand-drawn style of animation. Where Batik Girl was designed using 2D animation, this film was produced through nearly 1,800 individually painted frames. While Batik Girl deals with managing depression, The Dalang’s Tale also attempts to convey a relatable message that needs to be addressed – in this case, it takes on a darker tone by presenting the theme of domestic abuse.

The Dalang’s Tale also combines the narratives of two different worlds, although this time, the film focuses on the visuals of wayang kulit. The first story, set in the real world, centres around a workaholic father whose patience is tried as he accompanies his excited son to attend a wayang kulit show. Meanwhile, the other story, told through the traditional art form of shadow puppets, shows a boy who only sees the good side of his father. Yet behind closed doors, his mother bears the brunt of the father’s violence.

The film uses plenty of matching shots, occasionally connecting one shot from the real world into that of the wayang kulit world and back again. As the story progresses, we see how both narratives are linked to one another. The narrative is also inspired by wayang kulit conventions, especially during the wayang kulit sequences. In the flashbacks, the mother is shown on the right side of the frame, while the abusive father stands on the shot’s left side. In a typical wayang kulit performance, the good characters are positioned on the right side, while the bad characters are from the left. There is one instance, however, where the boy in the flashbacks sees his father being stabbed by his mother. Here, the positions of the parents are reversed, showing the boy’s perspective of who he thinks is good and bad.

Final thoughts… and what the future holds

While I had seen these films prior to the KLWKND event, what drew me to them were their similarities with the animated films from Cartoon Saloon, another animation studio on the rise. This Irish studio’s three feature films might be seen as separate pieces of a trilogy sharing a commonality in Celtic mythology and culture, while the two shorts by R&D build on aspects of Malaysian art and culture, and are also unified through recurring styles and themes.

Both films rely solely on the visuals and on-screen music. With no dialogue or voiceovers heard throughout the films, the accompanying soundtrack plays a crucial role in telling the story by conveying certain moods. For example, in The Dalang’s Tale, the music during the wayang kulit sequences shifts to a traditional gamelan (bronze percussion instruments) accompaniment.

Though it seems impossible to condense the impact of hard-hitting topics such as grief and domestic violence into an animated short, the message is still carried across, making full use of the visuals and music. Both protagonists in Batik Girl and The Dalang’s Tale struggle against their personal demons, but eventually, they learn to embrace both the lighter and darker aspects of themselves. Most importantly, the beauty of art becomes a part of their healing process, and contributes towards a compelling and poignant narrative.

With the future looking bright for The R&D Studio’s production of animated short films, this might prompt the question: Will there be a third film in the works, and thus the completion of a trilogy?

On that subject, director Irwan has confirmed that there will be a third film, and he is currently co-writing the next animated project.

“One of the missing pieces of the puzzle we haven’t put in yet is the art of dance,” said Irwan during the KLWKND. “So that’s what the next short film will be about: dance.”

Both Batik Girl and The Dalang’s Tale can be found at The R&D Studio’s channel on YouTube.