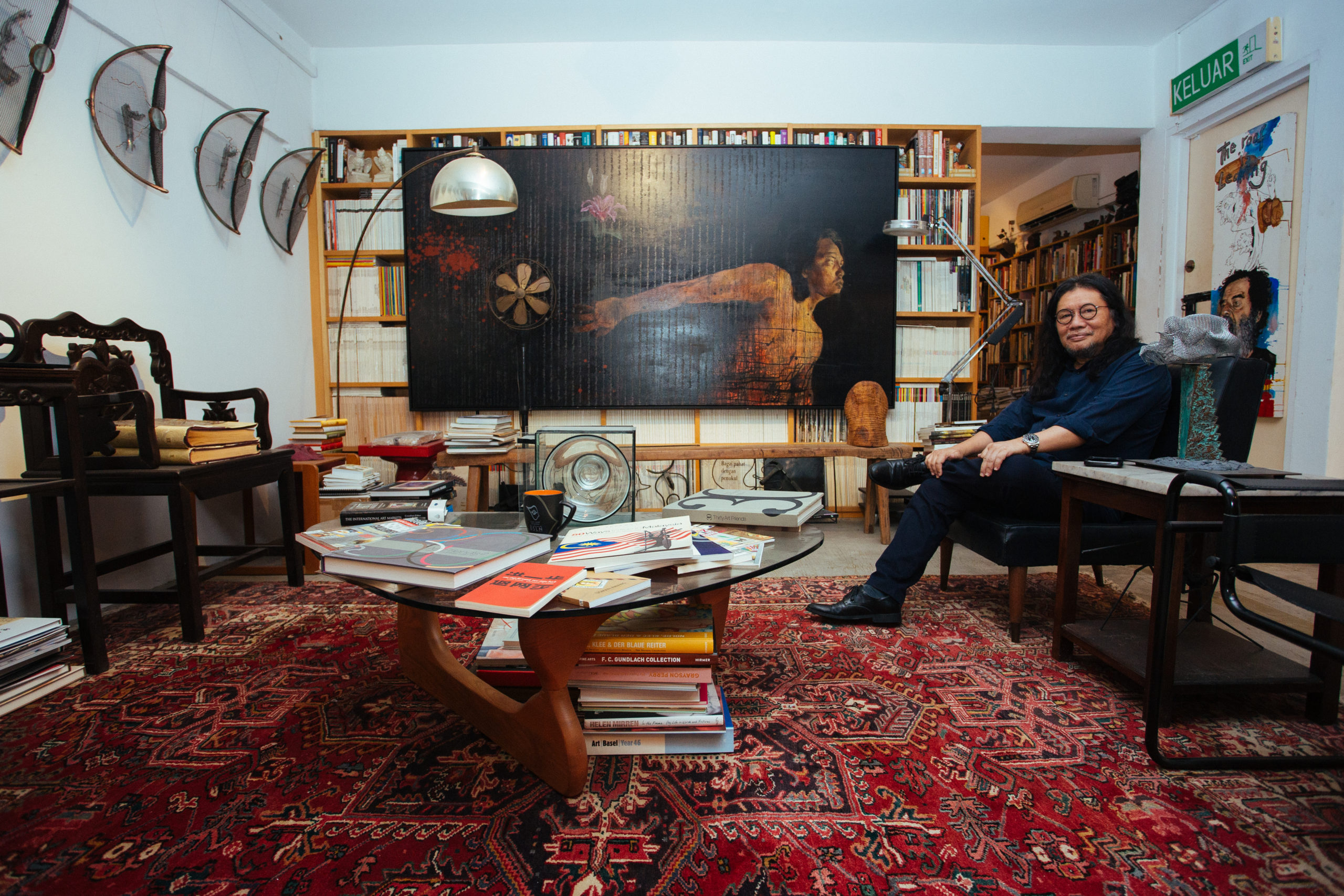 The passionate Pakhruddin ‘Pakha’ Sulaiman is a well-known figure in the local art scene. The avid collector shares his beginnings and aspirations during BASKL's visit to his personal gallery.

By NABILA AZLAN | Photos by DANIAL FUAD and PAKHRUDDIN SULAIMAN

“Frankly, I don’t remember my first few art pieces – when I started, I wasn’t so serious about it,” shares 66-year-old Pakhruddin Sulaiman, known to many as Pakha, about his earlier days in collecting art. The lawyer has been in love with art longer than he has been active as a law practitioner. What began as a knack for reading, we find out later, sparked it all.

In the making of this write-up, we sit with Pakha in his personal gallery which he has named “Ruang Pemula”. The cosy, one-roomed space which has a few hundred visual artworks and sculptures is also home to books of various genres, which fill up any empty nooks and crannies. Located a floor below his office in Ampang (Pakhruddin & Partners), the name Ruang Pemula (or RuPe for short) is itself a double entendre. “At the beginning of this place over 20 years ago, I noticed how art collecting was a very private affair. There were not many collectors at the time who were willing to share their collections with the public,” he begins.

“Most collectors would house their collections at home, which made for limited viewing opportunities and the privilege was reserved for friends and family. I still find it a real pity when something you like cannot be shared with the wider public. RuPe, which I open for visits by appointment, is probably one of the first spaces during its time dedicated and focused towards sharing a collector’s passion with the public. Hence, ‘pemula’ (kickstarter).”

Being a fan of the Indonesian Buru Tetralogy, Pakha wanted this space to be an ode to its writer, Pramoedya Ananta Toer who would often refer to his hero and strong figure in journalism Tirto Adhi Soerjo as Sang Pemula (the leader).

We ask the unassuming personality if his upbringing had anything to do with his love for visual arts. He answers: “My (earlier) environment was totally different; art was so alien – I grew up in a poor rubber tapper family. There is nothing from my background that prepared me, this kampung boy from Hulu Langat, to become an art collector! My interest in art came much later, although books came first and became my first love.”

Telling us how his parents tolerated his towering collection of books during his school days up to the years before his marriage to the late lawyer and social advocate Datuk Fatimah Sulaiman, he continues: “I was quite into the ‘heavier’ stuff in school. I remember saving money to buy Leo Tolstoy’s epic read, War and Peace, after sitting for my Malaysian Certificate Education exams (the equivalent of today’s Sijil Pelajaran Malaysia) which was a one-month marathon from start to finish.”

Pakha also cites other authors he covets, which includes local literary legends such a Shahnon Ahmad, A. Samad Said and Usman Awang. “If we’re talking English lit,” he elaborates, “I was mostly into Norman Mailer back then. At one time, I was into philosophy and was smitten with existentialist philosophers such as Jean-Paul Sartre and Simone de Beauvoir. I still own a sizable collection of their books to this day, which I brought back from London.”

An introduction to the scene

Reminiscing about the era when Kate Bush reigned supreme, Pakha recollects his memories of watching Britain’s renowned pop show, Top of the Pops, with his peers at the famous Malaysia Hall London. “I think my stay in London for my Law degree were the days I was truly exposed to the arts,” he says. Having graduated in 1982 from the University of London with a Bachelor of Law, Pakha is also a Barrister-at-Law from Lincoln’s Inn.

“Aside from browsing through local Malaysian newspapers during my studies, I also got into reading progressive and established publications like The Guardian, The Daily Telegraph and The Times, which were all available for free at the Hall. Over time, I grew to like the review pages where they would write about different books, works of art, even theatre. These articles finally got me going to check out the London art scene,” he continues.

It was a missed opportunity, he says, how during his time so many of his peers would choose to overlook art and culture while they were in London. Is this a pattern that can be observed amongst most local students flown abroad for their tertiary studies? “They were not interested, which is a shame considering how London is like the capital of theatre (or the performing arts). Students like me, although I would have to line up in the cold of winter to purchase tickets, would get hand full of affordable concession-rate tickets to shows.”

Some of Pakha’s best days saw him “seated in prime seats next to fluffy-coated theatre fans, even if he were in his most unkempt clothes” – to watch works by Shakespeare and Charles Dickens. “It’s such (understated) luxury,” he says.

Through similar listings, he would explore the town’s art and literary offerings – one day he would stroll through Tate Britain, the other he might be sitting down listening to figures like novelist Salman Rushdie and law philosopher Ronald Dworkin’s public talks. “Because these events were free and accessible,” he admits with a laugh, “It was hard to concentrate on my studies! Thankfully I managed to get through.”

Anyone can be a collector – no qualifications required

Our visit to RuPe also poses a guessing game to what sort of art would catch Pakha’s attention. Sprawled in the space are timeless and contemporary collections of visual portraits, abstract brushwork as well as modern sculptures that speak of different themes and messages, yet have a familiar feel across all of them. We observe how their colour palettes skew towards darker tones like black and brown, accented with bold strokes of reds and blues. “I love works that from the first sight grab me by the neck. Challenging, intriguing artworks that must not necessarily need me to understand them completely. Art that requires going through some processes of thought, in order to reach a certain conclusion,” he tells us about his go-to types of art.

After some years of familiarising himself in the scene, Pakha has come to the conclusion that he will pay attention to first and foremost, art by young, contemporary artists. Rising on their own pace and processes, artists in this stage are unafraid of being vulnerable, immersing themselves in thought-provoking subjects; their works are brave, outspoken, experimental. These are the qualities, when projected onto the canvas, that reel Pakha in. He cites HOM Art Trans’ director slash artist Bayu Utomo Radjikin’s earlier works as having this effect.

“You cannot fit these kinds of art in a home, as some are sized from floor to ceiling,” he says as he refers to four of his collected artworks from Ahmad Fuad Osman reflecting upon the Reformasi movement, including the famously-titled Syhhh…! Dok diam-diam, jangan bantah. Mulut hang hanya boleh guna untuk cakap yaaa saja. Baghu hang boleh join depa… senang la jadi kaya! (1999). “They (these brave artists) paint for themselves (instead of for the sake of staying commercially-viable). I like artists who believe in pushing the frontier without a full stop.”

Saying how some artists would see him as more of a “gambler” than an art collector, he says, “That’s because (at any particular time) no one could figure out if an artist is going to make it (in the industry) or not.” But Pakha’s shots have never missed the golden bullseye – besides Bayu and Fuad, he has supported others like Juhari Said, Jalaini ‘Jai’ Abu Hassan and Ahmad Zakii Anwar’s paths by investing in their art, bringing back some of their earliest work, long before they became famous.

To that, the lawyer-collector adds, “We (some collectors like me) – are not rich. What we have is passion and focus. I’m not a businessman.”

A personal definition to work-life balance

“My going into law is quite ‘accidental’ – I made a joke with a friend and it became a toss of a coin; heads, Law. Tails, Mass Communications!”

His musings on how his career began

If Pakha didn’t tell us about him wanting to be a journalist first, then only a lawyer, we would’ve missed a huge narrative. If he didn’t become a lawyer, he would probably spark debates through photojournalism – travel the world, write about a thousand different things. In the earlier years of his legal career, Pakha was as a litigator – a ‘court lawyer’, he says, but now he says his drive belongs in corporate law.

He has practised law now for over three decades after being called to the English bar in 1985, and he has pretty much a “typical timetable” for his days at work at present, as compared to the past. He says, “It involves me going to the office in the morning, completing my meetings and things like that… and then my evenings are usually quite free. Whenever there are art (show) openings, those would release me from this hectic life as a lawyer. In fact, one of the earlier reasons for my going to these shows and then collecting art, is how I see them as counterbalances to stress and challenges. They’ve become somewhat a therapeutic exercise for me. They work so well, I’m happy.”

A message to aspiring art collectors

“It is a myth, (as least in my case) how the fact that one person owns many pieces of art allows us to swap or rotate them ever so often. I usually wouldn’t touch the larger ones. But honestly, when you place art in any space it will take you by the chokehold – when you’d like to change it for another, you won’t be able to! The space won’t be the same again.”

Pakha on whether collectors redecorate their spaces on a regular basis

He has a few notes on collecting art for those who are thinking about it. If you’re keen (the more serious you are the better) – explore until you know what kind of art speaks to you. The lawyer says, “The first thing is to buy what you like but along the way, develop an eye for it. The latter does not come naturally; it means you need to acquire knowledge on art. Go to exhibitions, and instead of plunging and buying right away, understand what you’re trying to buy before committing. I’m not saying it’s wrong to simply buy what you like but it would be a real pity if you don’t develop these traits.”

Pakha seconds the act of buying according to your means. Not every collector’s budget is the same. If money is not the limit for you, why not buy the best of Malaysian art? But then again, everything boils down to the first note: buy what you like!

Of course, you’re definitely allowed to hoard to your heart’s desire. “I tell my friends that I don’t collect for the walls in my house (or my office), I do so for the virtual walls in my head. My imaginary spaces.”